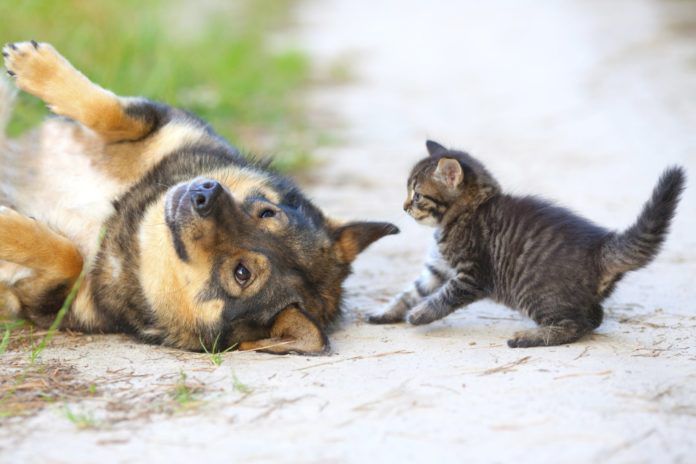 For the cat lover, nothing beats watching a kitten learn. That clever feline brain makes new connections daily, as nature and nurture converge to produce learning and behavior.

“The socialization period in kittens takes place between weeks two and seven,” explains Professor Nicholas Dodman, BVMS, director of the Animal Behavior Clinic at Tufts. Those early weeks are when a kitten most rapidly soaks up knowledge based on her experiences of the environment, tucking away information about this new world into a rapidly developing brain.

A kitten is born with all the brain cells it will ever have, but the brain changes in two ways: the cells get bigger and the brain changes shape. Dendrites are specialized brain nerve cell structures that reach out to form contacts with other nerve cells. The more connections the dendrites make, the more the brain grows. That growth is determined in large part by the types of environmental stimulation a kitten receives during the first six months of life, especially during the critical first seven weeks.

Kittens are born with their eyes and ears closed. The second week begins a transitional period, says Dr. Dodman, when the eyes and ears begin to open — almost as if a dimmer switch and volume control are being turned up. The kittens begin to see shapes and learn how to focus, and they become receptive to sound.

“At the end of that second week, they’re pretty much up and running. They can see, hear, feel and taste,” according to Dr. Dodman. “Now they’re beginning to imbibe all things about life around them.”

That is the time when a cat owner or breeder with a litter can start to socialize the kittens to life in a home. A kitten who hears, sees and experiences many different people, animals, sights and sounds during what is known as the “sensitive” period will usually grow up to be sociable, smart and curious: all the hallmarks of felinity.

However, it’s important to realize that socialization is much more than simply handling kittens for a few minutes a day. The development of their temperament is more nurture and less nature. Kittens need to have many different positive experiences with everything they are likely to encounter throughout their life: friendly dogs and cats, children, people of all kinds, car rides, and common household sounds such as blenders and vacuum cleaners.

Young kittens don’t have any preconceived notions about things in their environment, and in most cases they are too young to have had any bad experiences. When they encounter things in a positive way, their brains store the memories and label them as good.

According to Dr. Dodman, the goal is to limit fear during this impressionable time. A normal amount of fear is valuable because it helps a kitten to avoid things that might hurt him — but fear of harmless things, such as strangers visiting the home or encounters with other pets, can cause a cat ultimately to have a less fulfilling life.

The Problem of Feline Anxiety

“Anxiety underpins many of the behavior problems we see,” says Dr. Dodman. “It underpins aggression, and it can lead to a claustrophobic life where they’re not really interested in doing anything new.”

On the other hand, a well-socialized cat will be active and curious. He will get along well with other living things, and will have an equable temperament — meaning that he won’t fly off the handle at slight changes in life. Early socialization can prevent the development of a cat who is antisocial, bad-tempered and inactive.

“It just shows you the vital importance of proper handling, gentle handling and protecting them against aversive experiences,” explains Dr. Dodman. “You can engineer all kinds of wonderful relationships, assuage fears, speed up development and increase intelligence in that period of time.”

Therefore, exposing a kitten or cat to new experiences each day can help to build confidence. That can be something as simple as clipping a couple of nails or brushing the cat — experiences that may be stressful at first.

Cats rarely like unusual experiences the first time, but when they are repeated — and accompanied with a reward — the kitten learns that they aren’t so scary after all and comes to accept them readily. This applies to other events a cat may find unpleasant at first, such as riding in a car or receiving a bath.

Littermate Interaction Among Cats is Key for Good Social Skills

The age at which a kitten goes to its new home can also affect its development. Traditionally, kittens have gone to new homes as early as seven to eight weeks of age, but keeping them with their mother and littermates until they are 12 to 16 weeks old helps them to develop more fully. Kittens learn important psychological and behavioral lessons from being around their mother and littermates. Their perceptual, motor and social skills all benefit from this extended association.

Studies show that kittens who aren’t weaned until they are 12 weeks old respond better to separation from their mother and littermates. Kittens weaned very early become adults that are more likely to try to escape from their carriers, or be disturbed by new experiences or changes in their environment.

They are slower to learn and less successful in competing with other cats for food. And kittens raised in a restrictive environment with little or no handling are less likely to explore, play and approach people than kittens who were socialized.

The benefits of a longer period with mom may vary by breed. For instance, Siamese and other Oriental breeds seem to stay nervous longer than other kittens, explains Dr. Dodman. “When they are plucked from the litter at what would be the normal age of seven or eight weeks, they can develop the oral penchant of nursing on inanimate objects, sucking wool or blankets, so I think those guys should stay longer.”

But there are some situations when staying with mother may not be best. If kittens aren’t being socialized thoroughly at the home where they’re being raised — as in the situation of kittens being raised outside by a stray mother — it may be better for them to go to a family who can provide socialization experiences before the window of learning closes all the way.

The window for socialization doesn’t shut like an iron drawbridge at five to seven weeks, Dr. Dodman says. There is likely a second period of slower but still rapid learning. “It’s like you’ve dropped a gear, but you haven’t completely stopped. So I think the first six months of life is important, and the first two months are particularly sensitive. That is the period when you can really make a lot of headway.”

Provide New Experiences for Your Cat

Novelty is an important aspect of socialization. It might seem as if your kitten is getting lots of exposure to people, but she might not be meeting enough different new people. Rather than meeting the same eight people over and over, a kitten should meet new people and animals, and have brand-new experiences every week, multiple times a week. This gives the kitten a broad exposure and experience pattern to draw on later in life.

A kitten who has met only middle-aged people or only friends of the owner is less able to cope when she meets people who aren’t like those it’s used to: children, for example, or people wearing uniforms, people in wheelchairs or people from other cultures.

How to Provide Novelty for Cats

Good ways to provide novelty include taking the kitten to the veterinary clinic to be handled by the staff or taking her for a ride in the car — safely confined in a car seat or carrier — to the drive-through at a bank or fast-food restaurant. These experiences safely expose the kitten to new people and places.

Although the experiences kittens have during the early weeks and months of life are the most influential, it’s important to challenge them throughout their lives by exposing them to varied experiences, places and people, providing plenty of playtime and interactive toys, and teaching them to do different things, such as lifting a paw for a high five, coming when called or sitting on request.

Cat Socialization is a Continuous Process

Socialization and learning are skills, and cats who don’t use them will lose them. If you engage your cat mentally and physically throughout her life, she is more likely to maintain a young-at-heart attitude even into old age.

What if you’re not sure a kitten or cat you’re thinking of adopting received the optimum socialization experience? Not to worry. She may still be a wonderful companion for you, even if she’s a bit aloof or antisocial toward others.

“You can’t do anything about what went on before, but the good news is what you see is what you get,” Dr. Dodman says. “You can spend some time interacting with the cat and see if she is active, if she looks around, if she comes to see you, rubs against your leg, purrs — then you can decide whether you and that particular cat are going to get along well.”