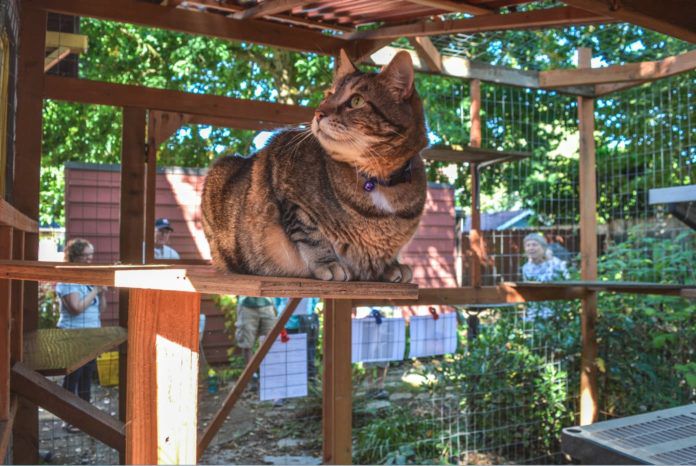 In a Portland, Oregon, variant of garden tours, a growing number of people are taking part every year in the Catio Tour. Organized by the Feral Cat Coalition of Oregon, the tour highlights the wide variety of screened-in enclosures that allow cats to safely enjoy the outdoors. “What the tour does is puts the name with the actual structure, and that helps people see that these do exist,” says Feral Cat Coalition of Oregon director Karen Kraus. “Plus, having the tour will raise the bar and inspire more people to do this on their own property.”

Indeed, catios are a growing trend around the country. (Harper Collins’ new word definition: “Catio: Combining the words cat and patio, which is an enclosed outdoor screened-in porch for a cat.”)

Four years ago, when the Catio Tour was first launched, it was reported on by a San Francisco radio station. Most recently, it received coverage from the Washington Post. And Amazon now sells options ranging from simple $60 pop-up enclosures to large-scale models that cost about $1,300. These structures can also be built by hand or incorporated into structures already present, such as a portion of your porch or an old shed.

The burgeoning popularity of catios is understandable. They enable a cat to enjoy sunny skies and a cooling breeze without risk to himself or the wildlife he might otherwise pursue (or be pursued by). And they provide a real-life connection with nature for cats in suburbs and even urban areas where modest pet palaces can be built out from windows.

The safety benefits of catios cannot be emphasized enough, for it’s an unfortunate reality that outdoor cats — whether domestic roamers or feral — kill a large number of animals each year, according to research conducted by the Smithsonian Conservation Biology Institute and the U.S. Fish and Wildlife Service. Preying cats that spend time outdoors can also find themselves hunted by larger wildlife. There is also the real risk of being hit by a car, or being exposed to various infectious diseases carried by other animals.

So where do you start?

The same as when drawing out plans for expanding your own home, you should consider what exactly you want to gain from a catio based on your existing architecture, your home’s setting and the weather conditions in your area. You can start small with an extended window catio, or go full scale and build a structure replete with ramps, compartments and maybe a view of a bird feeder. This would be ideal if you have multiple cats, or a dog that your cat enjoys time with. Though freestanding catios offer fresh air and sun, a pet door that allows your cat to enter and exit the catio at will is optimal.

Because severe conditions can create discomfort and even health risks, make sure that there is enough ventilation and shading for hot weather days, and some sort of protection from precipitation. You should also be careful that the roof and frame can withstand the pounce of a predator or the pressure of heavy snow. Not only should you be sure that another animal cannot get into your catio, but your cat should also not be able to find a bit of screening wide enough to squeeze through.

As much as your cat will likely come to love his catio, it’s not uncommon for cats to be skittish to novelty. Getting him used to his outdoor abode with a sprinkle of catnip over the items inside, and perhaps a familiar toy and bed, might help. As your pet becomes accustomed to his new private digs, you may even find that he wants to spend a lot of time in his catio. If the space allows for it, you can place a litter box, as well as food and water bowls, to make hanging out there even more pleaurable.

There are a number of sites that provide ideas for how to build your cat’s own bit of paradise. This Old House (thisoldhouse.com) gives step-by-step instructions on creating a two-story window appendage made of rot-resistant cedar designed to work with your home’s architecture. Animal Planet suggests online sites such Catio Designs (catiodesigns.com) and Catio Showcase (catioshowcase.com) for ideas on how to build a catio. It also points people to Outdoor Pet Houses (outdoorpethouses.com), from which you can purchase an already-built structure. For those on a budget, you can also consider the pop-up variety of catio, but you should be sure to secure it in some fashion.

Be sure you have permission

How extravagant you can be is up to your budget, and if you’re handy, so much the better. But don’t get started if you have a landlord or property management without first getting permission, as it would be a shame to have everything set up for your cat’s use only to find out it’s not allowed.

If you’re in a suburban or rural setting, you may have already been using a run or portion of a deck as a space set aside for your cat, but never considered it a namable thing. “One staff member has an uncle in Pennsylvania who built his years ago, based on what he thought his cat might enjoy, only he calls his catio ‘Catopia,'” says Feral Cat Coaltion of Oregeon director Kraus.

“I have the feeling that we’re getting close to a tipping point,” Krauss adds, “because the tour size has doubled each year and we’ve greatly expanded our outreach on the radio and in newspapers. At the start, the number of people who knew what a catio was was pretty tiny, but there is a greater understanding of what it is now. I will be happy when people know what a catio is and desire to have one for their pets.” — Constance Lindner