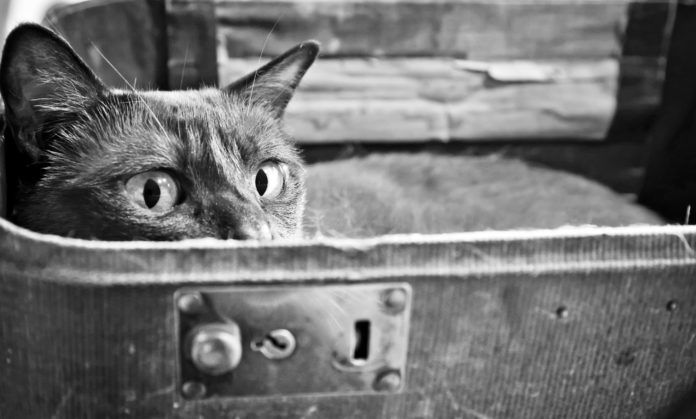 Former North Texas pet sitter Cathy Phillips relates that after caring for hundreds of animals over her 12-year career, the experience she remembers most vividly is being ambushed by a client’s cat during a visit to the home. She initially found him hiding under the bed, but says he then pounced on her as she was about to open the front door to leave.

“He must have been playing ‘possum’ by pretending to be asleep when I found him. The sneak attack caught me off guard because he was such a big sweetie when my husband and I first came by to meet him and get the key,” explains Phillips.

In truth, aggression and urine marking can be signs of boredom in cats while owners are away. In fact, Tufts Cummings School of Veterinary Medicine behaviorist Nicole Cottam says a trip to the pet store for toys should be on the list of things to do before cat owners leave their feline companions under the care of someone else during summer travel (or any time of the year, for that matter). The behavior and research coordinator at the veterinary school’s Animal Behavior Clinic says items like treat balls can keep cats busy while owners are away.

“The ball has a small hole in it that drops food whenever cats play with it. The toy gives them some exercise and something to do while owners are away,” she says. She also emphasizes that the cat’s individual needs should determine her care while owners are away on vacation.

“Indoor cats prefer staying home. Those with medical issues that need watching over or special care should be boarded at a kennel or even your veterinarian’s office,” says Cottam. Most cats, she says, will need at least one “getting to know you session” before the owners leave. Once the assignment starts, cats will require at least one visit every 12 hours by the pet sitter.

“Cats that are around their owners more often may need a little more attention,” she says. “I can only remember seeing one cat treated at the clinic for separation anxiety — it is rare.”

For those that do need a little help making the transition to being cared for by someone new, Cottam recommends an over-the-counter medication called Anxitane. Ingredients contain green tea extract, which is known to calm the brain. “It comes in different size tablets and there is a cat tablet size available. It’s given twice daily,” she says.

Additionally, owners should not punish or yell at a cat who may have acted out during the owners’ absence. Cottam says that the behavior should end once the household is back to its normal routine.