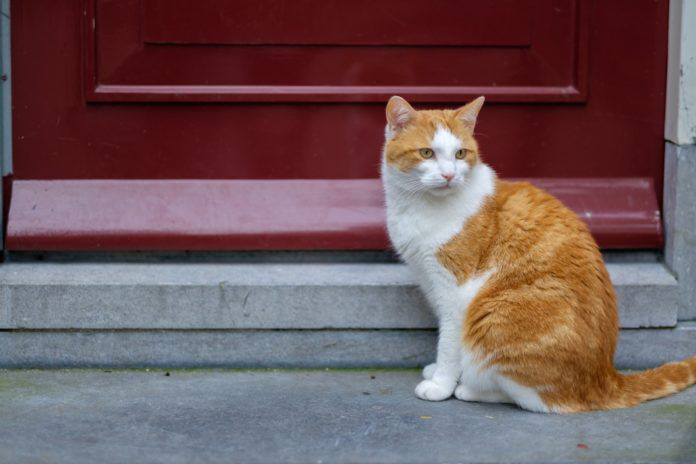 You’re a warm-hearted person with a special fondness for cats, especially the young tabby who has been showing up at your back door for the past few weeks looking for the free meal that you never fail to provide. The thought has occurred to you that you might invite him in to become a permanent member of your family, rather than letting him continue to lead his perilous life outdoors.

No longer would he have to scrounge for food and cope with cold, wet weather. No longer would he have to be constantly on his guard, watching out for coyotes, hostile dogs, oncoming automobiles and other threats to life and limb. As an indoor cat, he would be able to spend his time safely eating, sleeping and playing — leading the stress-free, comfortable life, in short, that any cat should find appealing.

But would the cat truly be happy as an indoor-only cat? Or would such an existence turn out to be a source of constant frustration for him — and for you as well? “There is no real way to assess that ahead of time,” says Nicholas Dodman, BVMS, Professor Emeritus at Tufts. “It’s been pretty well established scientifically that cats have different personalities. So it’s really a matter of just trying out the situation and seeing whether it works.”

Studies have shown, Dr. Dodman explains, that feline personalities vary according to three factors: alertness, sociability and equability. A cat who is likely to adapt well to a major change in his lifestyle — such as suddenly becoming an indoor cat — will be one who has a high score in all three of these categories. “The animal will be active and curious,” he says, “rather than shy, withdrawn and suspicious. He will be highly sociable, friendly both to humans and other animals. And he will be even-tempered. A cat who possesses these qualities has probably been acquainted with people in the past and is likely to be a good one to bring indoors.

“On the other hand, a cat who is skittish, who doesn’t want to come near you, and who tends to hide or to hiss at you when you approach — that’s probably not the kind of cat you’d want to incorporate into your home.”

Once you’ve decided that you’d like the cat to become a member of your household, your first objective is to attract the animal indoors, says Dr. Dodman. In some cases, he says, this may be a simple matter: “You just open the door and let him walk in.” But other cases may require considerable ingenuity. “If he doesn’t budge,” says Dr. Dodman, “give him a little nudge toward the open door. If he hisses at you, don’t force the issue. Just wait patiently. If the cat really wants to come indoors, he’ll eventually do so on his own. He may want to go outdoors again, which is all right, but eventually this won’t be an option. He’s in — and there will be no out!”

In advance of this dramatic transition, of course, you will have prepared your home to be as safe and cat-friendly as possible. You should make an appointment with your veterinarian immediately to determine the cat’s health, especially if you have other pets in your home.

If you intend to let the cat roam freely within your home, be sure to remove any plants that are known to be poisonous to cats. If you have a small, unused room, you should let the new cat be its sole occupant temporarily until it becomes accustomed to indoor life.

By no means should you confine the cat to a cage, Dr. Dodman stresses. “I can’t imagine taking a cat who is used to complete freedom outside and putting him into a cage. That’s crazy! You basically have to just let him come inside and provide the necessary facilities — a bed, feeding and water stations and a litter box.”

Beyond these essentials, he recommends using a variety of toys and other devices that will provide the cat with what he calls “environmental enrichment.” Such devices might include laser mice (beams of light that the cat will chase), a row of feathers on a string or a plaything as simple as the plastic ring from the top of a milk bottle.

Additionally, he notes, “I would definitely recommend that you position scratching posts in various areas of your home. My formula is to have at least two of these posts — one more than the number of cats. The posts must be tall, sturdy, and firmly based; they shouldn’t rock. And they should be positioned in a highly visible area because they are meant to send visual as well as olfactory messages. They are supposed to be both seen and smelled, not tucked away in an obscure corner.”

Because cats instinctively like to scratch at resistant surfaces, he adds, you might want to protect table legs, carpets and other vulnerable surfaces by covering them with a sturdy, canvas-like cloth. “But after the cat has been indoors for a while, you may discover that he’s not really a serious scratcher. Some cats just aren’t.”

Regarding litter boxes, Dr. Dodman suggests placing two of them at a distance from one another, perhaps one box on each level of your home. “Each box should be one-and-a-half times the size of your cat, and it should be filled with fine-grain, unscented litter,” explains Dr. Dodman. “For your cat’s convenience, the boxes should be easily accessible. They should be cleaned once every day, but be sure not to wash them with bleach or any other type of harsh chemical.”

Feeding your new cat should present few problems, according to Dr. Dodman. “I suggest that you use canned or dry foods that are approved by the American Association of Feed Control Officials,” he advises. “And whether you feed on a schedule or on a free-choice basis is really a matter of your daily routine — either is all right. But you have to monitor the feeding in either case. Some cats will just eat, eat, eat if the food is available, and their weight can get out of control.”

Introducing a new cat into a household can present challenges if another cat or a dog is already in residence. “Some cats will be sociable by nature,” Dr. Dodman points out, “but others will be very territorial and won’t welcome the new cat. If the two of them are ever going to get along, the resident cat’s initial hostility will decrease in four months or so, on average, at which point the hissy fits should become less frequent. If it looks like they’re never going to get along, you may have to separate them and assign them to separate parts of your home, each sequestered with separate beds, food bowls and litter boxes. And if that doesn’t work, you may have to find a new home for one of the cats.”

Likewise, the relationship between a new cat and a resident dog can go either way, according to Dr. Dodman. “You may have to keep them separated at first,” he says, “and if they’re never going to be friends, you’ll probably be able to see that when they first lay eyes on one another. In time, however, they may become indifferent to each other’s presence. Or they may even end up playing together, becoming the best of friends.” — Catnip staff