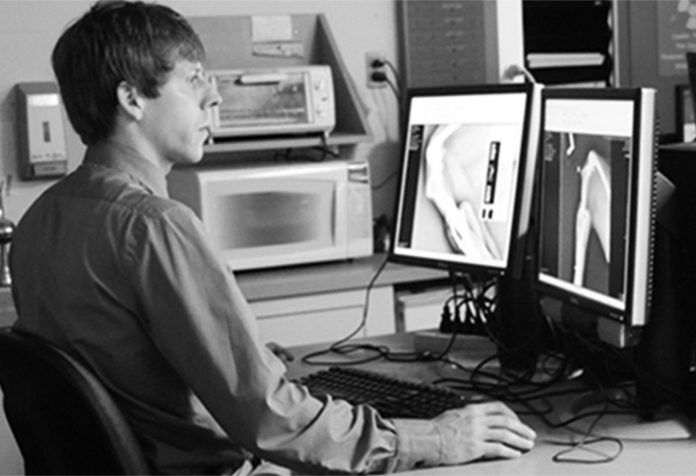 The history of veterinary radiology — the use of photograph-like images to diagnose an internal physical abnormality that is otherwise invisible to a practitioner’s eye — can be traced back to a specific day in 1895. While working in his laboratory, a German physicist named Wilhelm Roentgen witnessed a phenomenon that until then had never been observed.

What he observed was a peculiar kind of electromagnetic radiation — like a beam of light — that could yield an image of an animal’s internal organs and other structures, clearly displaying their unique composition and density in shades of white, black and gray. At the time, Roentgen didn’t quite know how to label this invisible beam of light — so he called it, simply, an X-ray.

Roentgen soon came to foresee that the X-ray might have potentially important applications. But he had no way of predicting that his discovery — for which he would be awarded a Nobel Prize in physics several years later — would eventually become a vitally important tool in understanding and diagnosing a host of human health disorders, ranging from cancer to kidney disease and shattered limbs.

Likewise, while animals were used experimentally during the early years of radiology — primarily to test the technology’s diagnostic efficacy in humans — first-generation radiologists could hardly have imagined a time when most veterinary clinics would be equipped with X-ray machinery. They could not foresee that radiology would someday be a mainstay in the diagnosis of countless physical disorders in cats, dogs and other animals.

Acceptance of X-ray imaging as an important diagnostic tool for cats developed gradually throughout the first half of the 20th century, notes James Sutherland-Smith, BVSc, an assistant professor of radiology at the Cummings School. He notes, however, that the American College of Veterinary Radiology was founded in 1961. “And that’s about the time that the use of the technology by veterinarians really began to grow,” he explains. “Today, all veterinary hospitals — even small clinics — will have X-ray equipment. It’s commonly used for initial screening tests. If more complicated imaging is needed — using a CT scan or ultrasound, for example — that can be the next step.”

In general, he says, X-rays are an especially effective medium for viewing bone tissue — studying fractures, for instance, and monitoring their healing. The technology is also useful in diagnosing such skeletal disorders as osteoarthritis and tumors. At the same time, X-rays are good for viewing certain soft tissues, especially those in the thorax, the portion of a cat’s anatomy between its neck and abdominal area that contains its heart and lungs.

“Radiology will help us look for lung or heart disease in a cat that is struggling to breathe, or to study the abdomen of a cat that is vomiting,” says Dr. Sutherland-Smith. “And we frequently use X-rays to examine fractures in a cat that has had an accident. Those are just a few examples, but there are many others.”

X-rays are also frequently used in excluding possible causes of a disorder and in confirming a tentative diagnosis arrived at by other means, such as a physical examination, blood test or urinalysis.

A radiographic procedure for a cat or other small animal works as follows: An X-ray beam is directed through the patient’s body, focusing on the area that is to be examined. The rays pass through the animal’s body to a detector and then onto film. In this process, different tissues absorb varying amounts of the rays. If a tissue absorbs a large amount of X-rays, fewer rays will reach the detector, and that part of the resulting image will be white or light gray. If no rays are absorbed, that part of the film will be black.

Since bones absorb most rays, they will appear white on a radiograph, while soft tissues, which only partially absorb the rays, will be light or dark gray. Radiographs are especially useful for examining the lungs because those organs are normally filled with air, which allows the X-rays to pass through to the detector. An abnormal tissue of any sort — a tumor, for example — will displace the air in the lungs and thus become visible as a white region on a black background.

X-ray technology has progressed dramatically during the past several years. Most notably, the radiographic procedure has become increasingly computerized, with images presented on a video screen rather than on film. Instead of having to wait for film to be developed, a veterinarian or technician can simply press a button and the image will be displayed instantaneously on a monitor.

In some cases, however, radiology has “dropped out of favor,” notes Dr. Sutherland-Smith. For example, he says: “With some abdominal diseases, we will often use ultrasound instead.” This is because X-rays of organs such as the kidneys, liver and bladder do not reveal differences between such tissues and their associated fluids — blood and urine, for example — while ultrasound has that capability.

Furthermore, ultrasound produces a moving image, done in real time, and can thus reveal the ongoing activity of an organ as it is functioning — a beating heart, for example — on a display monitor. Another area in which X-rays have lost favor, he says, is in the imaging of an animal’s head and skull. “An X-ray of that area yields a flat image,” he points out, which is difficult for a veterinarian to interpret. We now tend to opt for a CT scan, which produces a 3-D image.”

Despite the effectiveness of such alternative techniques and the limitations of radiology, X-rays remain the imaging method most widely used by veterinarians for a number of reasons. It is applicable to almost all areas of the body, and the equipment is affordable for most small animal practices. The images provided by MRI and CT scanning are superior to those provided by xrays, but the equipment cost is very substantial, and these modalities typically require that a cat be anesthetized, while a cat that is being X-rayed can, in almost all cases, remain fully conscious during the imaging process.

In this regard, says Dr. Sutherland-Smith, “Most cats are quite compliant and require only minimal restraint. So they don’t have to be anesthetized, although you might need someone to hold a cat still for a moment or two while the images are obtained. Occasionally — if a cat is particularly boisterous or is suffering discomfort because of an injury — pain medication may be required in order to get the animal into the proper position for a radiograph. But that is rarely necessary.”

In Dr. Sutherland-Smith’s view, radiology is a safe procedure; the risk of cancer caused by excessive exposure to X-rays, he says, is inconsequential so long as the practitioner’s imaging equipment is routinely checked and properly calibrated. The duration of an X-ray procedure depends on its purpose. Two views are routinely taken, with each exposure lasting a fraction of a second.

All veterinarians are qualified to interpret X-ray images, although complicated cases may require the interpretation of diagnostic imaging. And even a veterinarian who is confident about interpreting an X-ray may send the images to a specialist for confirmation of a tentative diagnosis. The cost involved in an X-ray procedure will depend largely on the complexity of the patient’s clinical signs and the number of views that a veterinarian requires in order to arrive at a diagnosis. — Tom Ewing