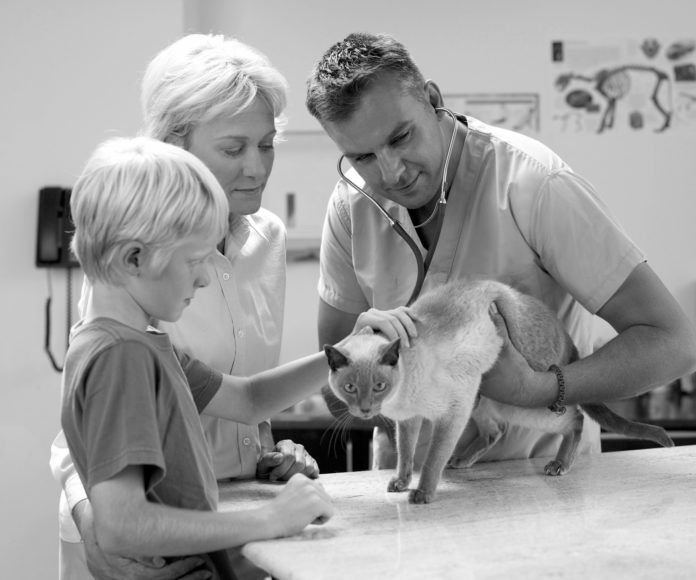 Busybody Buddy, always wanting to be wherever people are and never even ruffled by little kids, fell ill. The 11-year-old grey and white long-hair, rescued when he was two, “was just not feeling well at all,” says his owner, Susan Iuliano. “He lost a bunch of weight and was really weak. One weekend he was so bad we took him to the emergency room.”

It turned out Buddy was very dehydrated and perhaps had an abscess in his tooth. It was also discovered that he had heart disease and what appeared to be a tumor in his eye. “But the most critical thing was that a urinalysis and a couple of blood tests showed that his kidney numbers were really bad,” Ms. Iuliano relates.

The urinalysis was a significant key. “He presented with a series of problems —dental, a heart murmur, that thing in his eye. But if they had not done the urinalysis,” says Ms. Iuliano, “they would not have learned that his most significant need at that moment was critical kidney disease. After addressing that, we could then move on to the other issues.”

“When we collect a urine sample,” explains Buddy’s veterinarian, Linda Ross, DVM, “it primarily gives us information about the urinary tract and kidney function. It’s best used in conjunction with blood tests for kidney function — the complete blood count and the chemistry profile. Together, the urinalysis and those two tests paint the clearest picture for the veterinarian.”

According to experts, there are two ways to collect urine:

Voided sample: The urine is collected straight from the litter pan by a veterinary technician. Paper towels or non-absorbent litter is used in the pan to permit the urine to be collected.

An important limitation of voided samples is that they cannot be used for urine culture, because litter pans are not sterile. Additionally, the urine may have been contaminated by bacteria as it passed through the lower urinary tract. For a male cat, the opening of the urethra is inside the prepuce (foreskin) of the penis, and in a female cat it’s inside the vaginal area.

“If you’re looking for a bladder infection,” Dr. Ross says, “you may not know whether you’re seeing bacteria that are normally supposed to be in the vagina or prepuce or bacteria that are in the urine but shouldn’t be.” For that reason, it may be better to obtain a sterile urine sample, even though it’s more invasive for the cat.

Cystocentesis: This is the most common way a sterile urine sample is obtained from cats. The procedure involves inserting a needle in the bladder by way of the abdomen and withdrawing some urine.

“It sounds terribly invasive,” Dr. Ross says, “but for the most part it’s quick and non-painful, and usually doesn’t even require sedation.” Catheterization, which is commonly used in dogs, is rarely used in cats because it is far more painful and stressful than cystocentesis.

Analysis at the lab

Once the urine sample has been obtained, it’s sent to the lab for analysis. Here are the characteristics they look at:

Appearance: At first, the laboratory technician will simply look at the urine and note what color it is: pale yellow, yellow, dark yellow, or — if there’s blood in it — red or brown. (Older blood might look brown as the red blood cells will have broken down more.)

The tech will also look to see whether the urine sample is clear or cloudy, and whether she can see particles in it.

Specific Gravity: The connotation “U SG” stands for the urine’s specific gravity, which is a numeric way to tell how concentrated the urine is. For cats, says Dr. Ross, kidneys that function well can concentrate the urine to greater than 1035, which will appear as 1.035 on the urinalysis.

“If we get only a tiny bit of urine, the specific gravity is the single thing we’ll test for,” Dr. Ross says, “because it literally takes one drop of urine to do it.”

What follows in this section falls under the description of the dipstick analysis. “We literally take a little plastic strip that’s about one-quarter inch by three inches,” Dr. Ross says, “and dip it into the urine. Attached to the strip are little paper squares that are about one-quarter inch on each side. And each has a certain chemical in it that will change color depending on what’s being tested for and what is found.”

U pH: This tells the pH of the urine – how acidic or basic it is. Many cats have acidic urine (below 7), “and that doesn’t bother us very much,” Dr. Ross says. “But if it gets to 8 or 9, that can mean the cat has a urinary tract infection; the bacteria causing the infection can make the urine more basic.

Protein: The best amount of protein is none, or a trace. “When you get more than that,” Dr. Ross says, “it can signify certain types of kidney disease, or just kidney damage, or an infection. If we see a lot of protein in the urine – the highest number is 4+ – that will definitely lead us to do further evaluation.

Glucose: You don’t want any sugar in the urine, so the glucose level should be negative. If the vet sees any, that would lead to a check of blood sugar for diabetes. “You might also use a positive number to reassess the amount of insulin you’re giving a cat who already has been diagnosed with diabetes,” Dr. Ross points out.

Ketones: A by-product of glucose metabolism, ketone levels will also indicate whether a cat is diabetic. When a cat becomes severely ill with diabetes and his blood sugar is not under control, high levels of ketones in the urine may appear. Anything other than “negative” for a ketone value is not good.

Bilirubin: Since bilirubin is a breakdown product of the hemoglobin in red blood cells and is processed by the liver, any value other than “negative” can indicate (a) that the cat may be losing or breaking down too much blood and is anemic or (b) that he has liver disease.

Heme Protein: On some urinalysis write-ups, this is called “hemoglobin,” and it can mean that there’s too much red blood cell breakdown — not good — or that some red blood cells in the urine broke down after they were sitting there for a while. In such a case, it may not be significant if there’s only a small amount. There’s no specific cutoff that veterinarians looks for.”

Heme protein has to assessed in conjunction with blood tests,” says Dr. Ross. “If blood tests show there’s too much loss of red blood cells, it’s definitely something you want to investigate further.”

Sediment: Once the dipstick part of the urinalysis is complete, the urine sample is spun down in a centrifuge, and the liquid at the top is discarded. The material left at the bottom is called sediment. The veterinarian puts some on a slide and looks at it under a microscope. Here’s what she sees.

WBC: WBC stands for “white blood cells,” and if the vet sees any, it could be a sign of infection or inflammation The caveat is that if it’s a voided sample rather than one taken by the doctor, the presence of white blood cells is hard to interpret because they could have come from the prepuce or vagina. A second urinalysis performed on a urine sample obtained with needle may be necessary.

RBC: Red blood cells in the urine might indicate bleeding into the urinary tract, which can be the result of an infection or stones rubbing on the wall of the bladder or a urinary tract tumor. But there’s the same caveat with seeing red blood cells in the urine as with white. A few might be present because of the way the urine sample was obtained. A second urine sample may be necessary to help interpret the findings.

Bacteria: You likely know the drill on this category. Bacteria could indicate an infection, or, if the sample was voided rather than taken in the vet’s office, simply the presence of some bacteria in the prepuce or vaginal area.

Crystals: These are seen when minerals have precipitated out in the urine. Sometimes, in small numbers the presence of certain types such as struvite or calcium oxalate can be normal.

Fat: “Male cats in particular tend to have relatively large amounts of fat in their kidney cells,” Dr. Ross says. “It comes from the breakdown of cells in the kidney tubules. But it’s normal. We notice it, but it doesn’t really mean anything.”

A year and a half after his diagnosis with kidney disease, Buddy is doing great. His heart disease is under control, his oral hygiene needs have been taken care of, and although he had to have an eye removed because of a tumor, he is the same calm, people-loving cat as ever. That is, although he appears to have lost a few of his lives in one fell swoop, he still has plenty of them left.

Ms. Iuliano gives Buddy subcutaneous injections of fluid at home every few days; the hydration therapy is necessary to slow his kidney disease progression. But he takes it well.

“At first, Buddy went from 15 pounds to 9.6 pounds, and now he is all he way back to 13.29. He has really bounced back – better than expected. If his kidney disease hadn’t been picked up,” she emphasizes, “he would have died.” — Bob Barnett