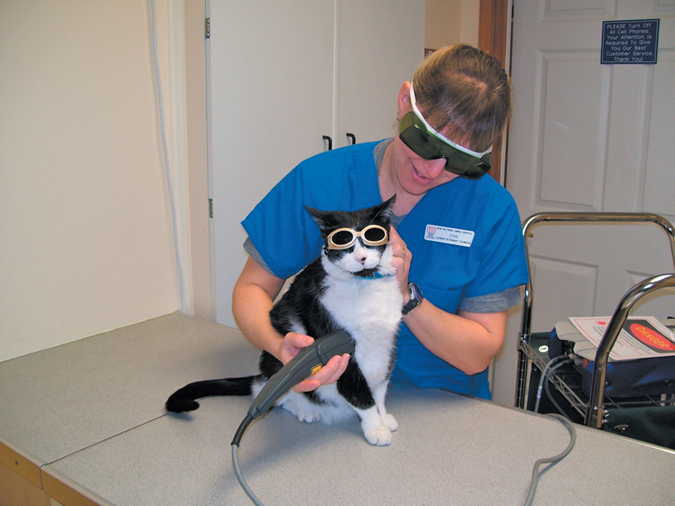 But despite all the claims for laser therapy’s power, pure scientific proof for its beneficial effects in cats is lacking. (The same is true for laser therapy in people, for whom the range of clinical applications is much wider and ranges from dental to dermatological pain and everything in between.) Why, then, are more and more veterinarians buying in, including Tufts’s own Alicia Karas, DVM, who has co-founded our veterinary school’s Patient-Centered Care Initiative to forge new ways of reducing the pain of cats (and other animals)?

One reason laser therapy is making its way into animal clinics is that it is very heavily marketed to veterinarians. Says Dr. Karas, “there will be two to three laser companies, at least, at every big veterinary conference. And there are big, full-page ads in veterinary magazines.”

It’s not all marketing, however. Preliminary evidence in lab animal models suggests that lasers may expedite wound repair. The thinking is that laser therapy induces a photochemical reaction in cells, increasing production of substances at the molecular level that bring more oxygen to tissues to reduce inflammation, and bring about other healing effects as well.

Veterinarians have seen benefits of laser therapy firsthand. Dr. Karas, for instance, has beamed specific spots with a laser wand for accelerated healing of wounds resistant to other treatments and has also seen improvements in inflamed tendons, arthritic joints, and spasmodic muscles that weren’t helped with more traditional therapies.

What’s missing from the anecdotal reports such as Dr. Karas’s is gold-standard scientific evidence: carefully designed studies that have been reviewed at arm’s length by veterinary researchers and then published in a journal that only accepts rigorously vetted investigative trials. As Dr. Karas puts it, there has been no “We divided 48 cats into two groups and found that those treated with x level of laser therapy directed at a specific spot on the body for y amount of time reduced pain from z condition 37 percent more than in cats treated with a laser wand that was not plugged in.”

If you’re considering laser therapy for your own cat

Let’s say you’re contemplating laser therapy for your own pet in pain, or your veterinarian recommends it. Given the intriguing anecdotal reports of its effectiveness juxtaposed against the lack of true scientific evidence, how do you decide?

First, “exhaust all the proven possibilities” for reducing pain, Dr. Karas advises — medications, surgeries, and lifestyle changes like weight management that might relieve pressure on vulnerable joints and other body parts.

In addition, she says, always make sure a problem involving pain is properly diagnosed before you embark on a pain management regimen. You need a diagnosis so you know where to opt for surgery, or perhaps chemo or radiation therapy for cancer, or an antibi-otic to deal with an infection.

Once you’ve done all the up-front work — having the cause of pain properly diagnosed and treated with tools from the veterinary healing arsenal that are known for a fact to take care of medical problems — then laser therapy becomes a can’t-hurt-might-help solution for taking down pain that other modalities haven’t been able to fully eliminate. That is, it becomes a possibility after proven therapies have been exhausted.

Low-level lasers come in four classes: 1, 2, 3, and 4. Most of those used in veterinary medicine are class 3 or 4. Once you reach that level, you have to wear protective goggles or glasses, and so does the cat. If you inadvertently shine the laser in an eye, you can damage it.

The mechanisms by which laser therapy produces its purported effects are poorly understood, not just by the veterinary community but by the research community at large. We know it exposes cells, or tissue, to low levels of red and near infrared light, and that exerts some kind of effect. But despite talk of increased oxygenation of cells and other influences, it can’t be said with confidence what’s actually happening that would reduce pain. And because there are so many confounding factors in researching laser therapy — wavelength, power, and the amount of time the beam is aimed at a spot — it’s hard to assess its effects.

Different cats will respond differently, too. A heavier cat, or a darker cat, is going to need a different setting on the machine than a trim or light cat. Dark skin absorbs more of the beam, for instance.

There might be a placebo effect, too, at least according to owner perceptions. Owners may feel they did something for their cat and spent money, and therefore the cat must feel better. In other words, there’s plenty of reason for healthy skepticism.

Still, says Tufts veterinary pain specialist Alicia Karas, DVM, “mysteriously, the body has ways to resolve injury and pain, and I think laser may be one of those ways. In alternative medicine we say, ‘the body wants to heal. We just need to figure out how to let it.'”