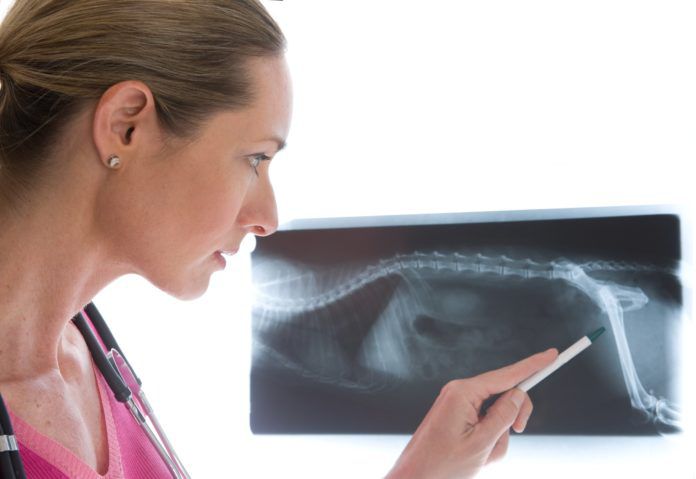 A healthy cat’s impressive physical traits — strength, agility and lightning-fast responses to external stimuli — are essentially attributable to the structure and versatility of her musculoskeletal system. However, this system is also subject to a variety of disorders that can seriously compromise a cat’s quality of life and agility. Even worse, such disorders often defy prompt recognition and treatment.

The prevalence of feline joint disorders is probably underestimated, according to Michael Kowaleski, DVM, a professor of orthopedic surgery at Tufts University’s Cummings Veterinary Center. “One of the distinctive characteristics of cats is that, compared to dogs, they are relatively sedentary,” explains Dr. Kowaleski. “A dog owner who routinely takes his animal for a walk or plays Frisbee with him will observe pretty quickly if the animal is limping. But a cat that is uncomfortable or in pain will tend to be less active. Instead of limping around, she will lie down and rest. And the owner is likely to think that the cat is just tired and needs more rest simply because she’s getting older.” Dr. Kowaleski notes that several scientific studies support the notion that the prevalence of joint disorders in cats is significantly greater than was previously believed.

Among all feline musculoskeletal disorders, the most commonly observed constitute a broad category of conditions that affect the joints, the areas in which the ends of two or more bones reside in close proximity.

Almost all lead to arthritis

Joint disorders exist in a variety of forms and can be precipitated by a wide range of factors, including genetically acquired predisposition; congenital malformation; degenerative disorders; physical trauma; immune system malfunction; and even infectious disease. Despite the extensive range of such afflictions, Dr. Kowaleski notes that virtually all feline joint disorders eventually lead to osteoarthritis, a condition characterized by tissue inflammation within the joints, changes in their anatomical makeup, and an eventual decline in the ability of associated bones, muscles, tendons and ligaments to function properly.

And all of these disorders are painfully exacerbated by the constant wear and tear that the joints experience during the course of a typically active cat’s daily life. Dr. Kowaleski identifies the following four joint disorders as those for which cats are most frequently treated at the Cummings facility: hip dysplasia; anterior cruciate ligament rupture; meniscal mineralization; and luxating patella.

u Hip dysplasia is a genetically inherited, developmental malformation of the ball-and socket joint that connects a cat’s rear thigh bone (femur) to the animal’s pelvis. The “ball” is the smooth, spherical top end (femoral head) of the thigh bone, while the “socket” is a cup-shaped cavity (acetabulum), which is located at the lower end of the hip bone. In a normally formed animal, the femoral head, while fitting snugly within the acetabulum, is free enough to glide and rotate, thus allowing a cat the mobility to lie down, stand up, climb trees, chase prey and so forth. In a cat with hip dysplasia, the ball and/or socket are misshapen, which prevents the femoral head from fitting properly and moving smoothly.

-Anterior (cranial) cruciate ligament (ACL) rupture affects either of the two bands of tissue that, when functioning properly, support the front and back of a cat’s knee and prevent the ends of the bones in that joint (femur and tibia) from sliding in a front-to-back motion. When the front (anterior) ligament is damaged or torn, the joint surfaces slide abnormally, which will eventually cause severe pain and lameness. A ruptured ligament may be treated surgically, and an injured cat is likely to recover full use of an affected knee joint.

Some cats do not require treatment of an ACL rupture, while other cats may have chronic lameness if surgery is not performed. In some cases, a cat with an ACL rupture may put excessive weight on the unaffected leg, which may promote the development of arthritis and eventual ACL rupture in the knee joint of that leg as well.

-Meniscal mineralization is marked by the gradual buildup of hard inorganic substances, such as calcium crystals, within a cat’s knee joints. The mineral is deposited in rubbery, C-shaped, cartilaginous structures called menisci, which in a normal cat provide joint strength and stability. But when the tissue becomes mineralized, the normally shock-absorbing menisci gradually lose their protective capability, and an affected knee joint will become increasingly dysfunctional and painful over time.

-Luxating patella is a disorder in which the kneecap (patella), which normally slides smoothly within a groove at the lower end of the thigh bone, gradually becomes loose and dislocated. As this phenomenon progresses, the patella becomes increasingly unstable and displaced, and the cartilage progressively wears away from the articular surface. Consequently, the cat’s gait becomes unsteady and the animal may become lame.

In addition, says Dr. Kowaleski, if a cat is hit by a car, falls out of a tree or is the victim of any other serious accident, the result can be a traumatic injury to the animal’s musculoskeletal system. Although the most frequently treated traumatic injuries are fractures of the long bones in a cat’s front limbs, hind limbs and pelvis, an animal’s joints can be seriously injured as well. He notes that one of the most common is a fracture of the ankle joint, the area that houses the ends of the tibia and the fibula, which provide strength and stability to a cat’s rear legs. “Fractures or ligament ruptures in this joint are among the traumatic injuries that we see most frequently in cats,” says Dr. Kowaleski.

According to Dr. Kowaleski, a host of other less commonly diagnosed feline joint disorders includes such severe conditions as synovial cell sarcoma, a malignant cancer of the soft tissue that lines the surfaces within the joints; immune-mediated joint disease, an inflammatory disorder in which a cat’s hyperactive immune system attacks the animal’s own tissues, including those within the joints; and various congenital abnormalities, such as a missing bone in a limb or an absent component within a joint. In addition, he points out, the integrity and efficiency of a joint can be compromised by the presence of an infection. “In cats, infections commonly occur as a result of bite wounds,” says Dr. Kowaleski. “If a bite penetrates into a joint, the skin over the joint will heal quickly but bacteria that have gathered beneath the skin will have nowhere to go — and the cat can end up with an abscess in that joint.”

Veterinary examination of a cat that seems to be experiencing joint discomfort will focus initially on excluding conditions that might account for the problem. This will entail a complete medical history and overall physical examination of the patient, a thorough orthopedic exam, radiographs (X-rays) of the cat’s joints, and possible analysis of the fluids in the joints. Subsequent treatment will depend on the diagnosis.

“A cat that has hip dysplasia can undergo a hip replacement, and the animal can return to normal. Surgical solutions may also be available for cats that have experienced trauma, such as an ACL tear or other ligamentous injury,” says Dr. Kowaleski.

In some cases, however, surgery is not an option. For a cat that has end-stage osteoarthritis and pain in an elbow or knee, joint replacement is not a reasonable option. “In that case,” he notes, “we have to rely on medical treatments, such as recommending that the cat lose weight and be given glucosamine, which can strengthen the cartilage in the animal’s joints.” — Tom Ewing