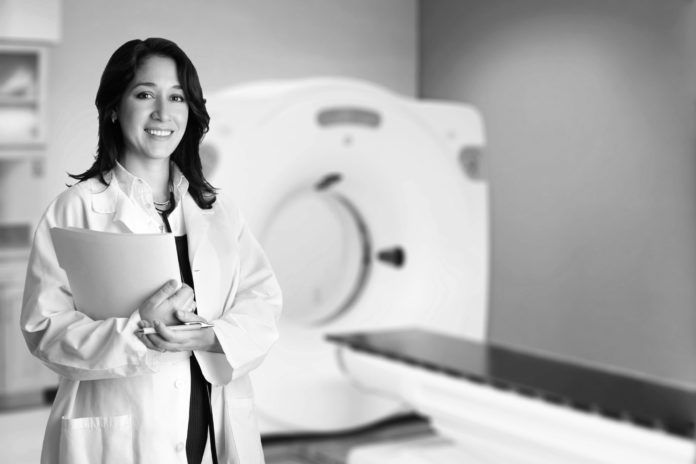 Over the past half-century, X-rays have become, by far, the most frequently relied upon radiologic means of diagnosing a wide variety of feline health problems, and they continue to play that leading role today. However, since the late 1980s the diagnostic value of X-rays has in many cases been superseded by a more complex, more revealing technology — computed tomography (CT) scanning.

In addition to this newer technology’s value in identifying various internal feline disorders, CT scanning — which combines X-ray imaging and computer technology — has also become increasingly useful in preparing animals for surgery and in pinpointing specific areas of the feline anatomy that are to be treated with radiation therapy.

From a clinician’s point of view, says James Sutherland-Smith, BVSc, an assistant professor of radiology at the Cummings School, CT scanning has two advantages over X-ray imaging. “The biggest advantage is that CT scanning yields three-dimensional, cross-sectional images, while X-rays produce only two-dimensional images. And with CT, we can get as many as 200 or 300 images of a region of a cat’s body during a single procedure. With X-rays, we can get only two or three images.”

When CT scanning made its debut as a diagnostic imaging technology for humans in the early 1970s, it was generally referred to as computerized axial tomography (CAT) scanning. (The term axial refers to the technology’s cross-sectional image capability, while the term tomography is derived from the Greek words for volume and measurement.)

In a conventional X-ray procedure, notes Dr. Sutherland-Smith, technicians direct a beam of the rays through a motionless patient’s body, focusing on the specific area that is to be examined. The X-rays pass through the body and onto a film, with different tissues absorbing varying amounts of the rays. If a tissue absorbs a large amount of the rays, fewer will reach the film, and that part of the resulting image will be white or a light shade of gray. If no rays are absorbed, that part of the film will be black.

But in CT, he points out, the X-ray device is mounted on a circular gantry, which, instead of remaining in a fixed location, rotates around a cat’s body as the animal, which must be anesthetized, lies motionless on a movable table that slides slowly into the machine’s donut-shaped portal. A continuous exposure is made as the tube spins rapidly around the patient’s body, sending narrowly focused X-rays through it to detectors located opposite the tube.

“A computer collects all the information as the X-ray tube circles the patient,” says Dr. Sutherland-Smith. “With each rotation, we can instantaneously record and reconstruct a single slice.” The patient is gradually moved through the gantry, and the machine yields additional slices, creating a three-dimensional representation of the region that is being examined. In order to avoid a blurred image, the patient must, of course, lie motionless throughout the examination, which typically lasts for several minutes or more.

In addition to its ability to produce cross-sectional images that can be reconstructed into three-dimensional images, CT has yet another advantage over X-ray technology, notes Dr. Sutherland-Smith. The contrast resolution in CT images, which can be manipulated by a technician, is superior to the gray scale characteristic of X-rays, thus providing a comparatively clear differentiation among tissues. In many cases, the animal will be injected with an intravenous contrast medium to further enhance the differentiation of tissues.

What it’s best suited for

CT imaging, says Dr. Sutherland-Smith, is especially well suited for diagnosing disorders affecting the nose and sinuses. The technology is also useful for examining brain lesions; assessing bone and muscle disorders; producing precise images of organs lying within the thoracic cavity; and examining and diagnosing specific disorders associated with the lungs, heart, and abdomen. In addition, veterinary surgeons will often rely on CT scans preoperatively to precisely identify the location of a tumor or to guide a needle to the exact area from which tissue is to be removed for a biopsy. Veterinary radiation oncologists use CT to specifically demarcate a cancerous growth that is to be treated with radiation therapy.

A veterinarian’s decision whether to use CT rather than other innovative imaging methods such as ultrasound and magnetic resonance imaging (MRI) depends on several factors. For example, an ultrasound examination, which uses sound waves to produce an image, is less expensive than CT and does not require the patient to be anesthetized. However, an ultrasound procedure takes longer to perform and is largely limited to evaluation of the heart and abdomen. And while MRI, like CT scans, produces valuable three-dimensional images, the procedure takes close to an hour, while a CT scan can be done in minutes.

Two significant drawbacks, however, are associated with CT scanning, says Dr. Sutherland-Smith. One has to do with the need for a cat to be motionless throughout the procedure. “As opposed to an X-ray, which requires that a cat be perfectly still for only a matter of milliseconds,” he points out, “a CT scan typically requires that the animal be motionless during the time it takes to set it up for the procedure plus the time — at least 15 to 30 seconds — that it will actually be in the CT device. Therefore, a CT scan typically calls for a cat to be anesthetized or at least heavily sedated. And there are some cats —those with serious heart conditions, for example — that would not be suitable for this.”

At the same time, however, he points out that even though CT involves a much higher dose of potentially cancer-causing X-ray radiation than other imaging techniques, most cats rarely undergo CT scanning in the course of their lives. “So,” he says, “we don’t feel that we’re exposing a cat that is undergoing a single CT scan to much additional risk.”

Cost needs to be justified

The other consideration that might discourage an owner from having a cat undergo CT scanning is its comparatively steep cost. These procedures are typically done at special CT clinics or referral hospitals, says Dr. Sutherland-Smith, and the cost can typically range “somewhere between $800 and $1,500, including anesthesia.” However, he notes, the cost can be even higher than that, depending on the clinic, the purposes of the scanning procedure, the complexity of the disorder being evaluated, the number of views that are required, and, where relevant, the cost of having an independent radiologist interpret the CT images.

“Obviously, it’s expensive,” he says, “so you definitely need a good reason for having a CT scan done. If you can get adequate information from X-rays or ultrasound, which are typically far less costly, then you might want to opt for one of those imaging methods instead.” — Tom Ewing