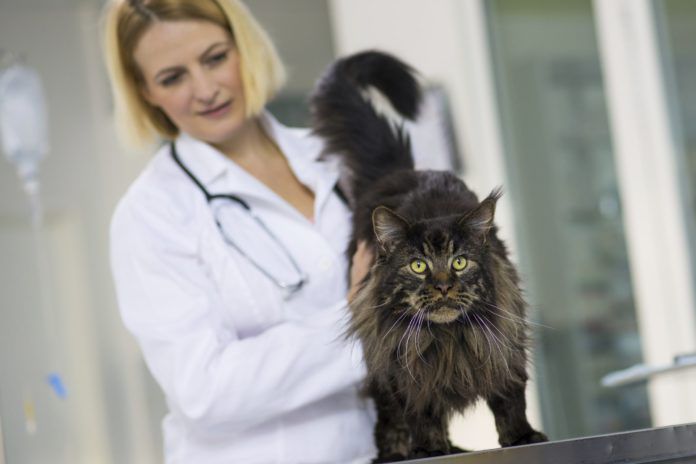 Chester is a 13-year-old diabetic orange tabby. When he first presented to my feline-only veterinary hospital five years ago, he had the classic signs of diabetes: excessive thirst, increased urination and weight loss despite an exceptionally good appetite. Making the diagnosis was easy. Chester’s blood sugar was greater than 400 mg/dl (normal is somewhere in the 80 to 150 range) and he had lots of sugar in his urine. Most diabetics are male, like him. Most are middle aged, like him. Most are overweight — also like him. In fact, it was a classic textbook case.

I prescribed insulin injections twice daily for Chester. After a couple of minor adjustments, we arrived at the insulin dose that controlled his diabetes: three units twice daily (a typical diabetic cat requires somewhere between one and four units twice daily). Finding Chester’s proper insulin dose was almost as easy as making the initial diagnosis. I examined Chester every six months, and my physical exam findings — coupled with a few simple blood tests — confirmed that Chester’s diabetes was very well regulated.

And then it wasn’t.

It started slowly. Chester’s owner noticed that the urine clumps in the litter box were getting bigger, and he was spending more time at the water bowl. A fructosamine test — which determines how well controlled his diabetes has been — indicated that he needed more insulin. We increased his dose to four units twice daily. Unfortunately, it didn’t seem to make much difference. The increased thirst and urination continued, and so did his appetite. In fact, he became absolutely ravenous. And increasing his insulin was having little effect. We reached eight units twice daily, and then nine, and finally 10 units twice daily. Clearly, Chester had developed resistance to his insulin. Most uncontrolled diabetics lose weight, but paradoxically, Chester began to gain weight. In fact, he became obese. There are many possible causes for insulin resistance, but Chester fit the bill for a condition called acromegaly.

Feline acromegaly is a disease caused by secretion of excessive growth hormone (GH). Fortunately, it is considered an uncommon disease (although experts feel that it is probably underdiagnosed). The source of the growth hormone is a tumor of the pituitary gland.

Cats with acromegaly are usually brought to the veterinary office for insulin-resistant diabetes with concurrent weight gain, rather than the classic weight loss. Other clinical signs may be present — but can vary greatly — due to the wide range of effects on the body. Some cats with acromegaly develop a broad face, large feet and a protruding lower jaw, with widened spaces between the lower incisors.

Growth hormone can have a wide array of effects on multiple organ systems. Growth hormone affects the liver, stimulating the secretion of insulin-like growth factor-1 (IGF-1). It is this hormone from the liver that is responsible for many of the clinical signs associated with acromegaly. Excessive GH can cause the internal organs to become enlarged, and this can often be felt during a physical examination. The heart may enlarge, and cats may develop abnormal heart rhythms and congestive heart failure.

The tissues of the soft palate may grow excessively, leading to noisy breathing, snoring and even upper airway obstruction. Most cats with acromegaly do not show neurologic signs. However, if the pituitary tumor grows excessively large, cats may show signs such as mental dullness, walking in circles and even blindness.

Making the diagnosis of acromegaly can be a challenge. It usually starts with the veterinarian having a clinical suspicion, based on the patient’s history and clinical signs, the age and sex and the physical examination findings. Blood and urine tests aren’t specific for diagnosing acromegaly per se; most of the abnormalities are referable to diabetes (high blood sugar, sugar in the urine), which is present in nearly all cats with acromegaly.

An excess of GH causes a state of insulin resistance, which eventually results in diabetes in nearly all cats. In humans, the diagnosis is made by measuring the level of GH in the bloodstream. Currently, there is no laboratory in the U.S. that offers testing to measure feline GH. And even if a GH test were readily available, this test alone is not 100 percent reliable in making the diagnosis because GH production is cyclic and the concentration of the hormone can vary throughout the day.

The test that is more commonly used in the U.S. is the measurement of serum IGF-1 levels. The liver secretes IGF-1 in response to stimulation by GH. If the IGF-1 levels are high, then presumably the GH levels are high, and the cat has acromegaly. Caution should be used in interpreting this test, however, because while most diabetic cats with acromegaly do have elevated IGF-1 levels, one study found that diabetics without acromegaly who have been treated long-term with insulin (longer than 14 months) have higher levels of IGF-1 in their blood compared with normal (non-diabetic) cats. The bottom line is that there is some overlap in IGF-1 levels between non-diabetic cats, diabetics without acromegaly and diabetics with acromegaly.

X-rays may provide additional support for the diagnosis of acromegaly, by confirming the presence of a protruding lower jaw, enlargement of the abdominal organs, enlargement of the heart and/or congestive heart failure, but these are non-specific findings. Advanced imaging techniques are needed to document the presence of a pituitary tumor. Both computed tomography (CT) and magnetic resonance imaging (MRI) are helpful in identifying pituitary tumors, but MRI is believed to be a more sensitive test.

Some hope for the future

A recent trial with the novel somatostatin analog pasireotide looks more promising; eight cats with acromegaly treated with this drug showed a significant decrease in IGF-1 levels and insulin requirements in all cats. Other drugs used to treat acromegalic humans — such as growth hormone receptor antagonists and dopamine-like drugs — have either not been evaluated in cats or have been evaluated in very few patients.

Surgical removal of the pituitary tumor is the treatment of choice in people, but this surgery is rarely performed in the U.S. It is a technically difficult surgery to perform in cats and requires a surgeon very experienced in the procedure. It is impossible to remove the tumor alone; instead, the entire pituitary must be removed. Because the pituitary gland produces several hormones, patients undergoing surgery will require medical treatment with cortisone and thyroid hormone to compensate for the loss of pituitary function. Therefore, cats that are known to be difficult to medicate tend to be poor candidates for the surgery.

The most common treatment

The most conservative — and most common — treatment for cats with acromegaly is simply to increase the dosage of insulin in an attempt to bring the diabetes under control. While this may help control the clinical signs of diabetes, raising the insulin dose has no effect on growth hormone secretion. The pituitary tumor will gradually enlarge, and the clinical signs of acromegaly will slowly progress.

The short-term prognosis for acromegaly is guarded. Insulin resistance may generally be controlled satisfactorily by giving larger doses of insulin, and mild heart disease may be managed by administering diuretics and other cardiac drugs. The long-term prognosis is poor, however, with most cats dying of congestive heart failure or of neurologic signs related to enlargement of the pituitary mass.