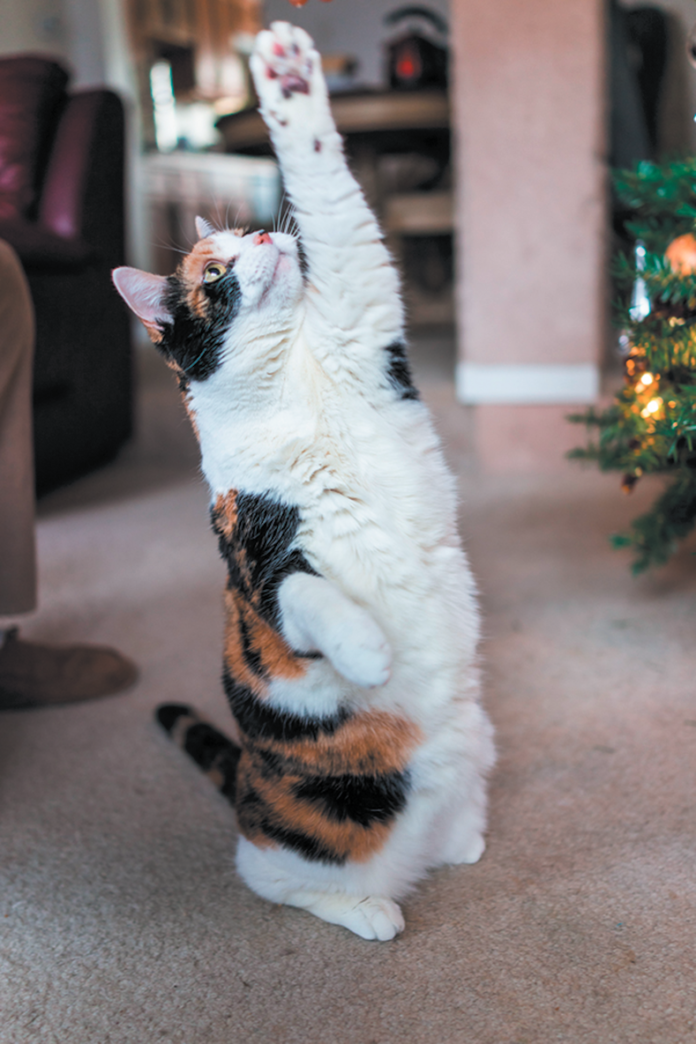 “When it comes to teaching tricks to a cat, it isn’t that they’re not smart or can’t learn,” says the head of the Tufts Animal Behavior Clinic, Stephanie Borns-Weil, DVM. “They actually can be quite good learners. But you have to teach them how to learn.”

Dogs learn to learn when they’re just a few weeks old, getting the hang of sitting for food, coming when their name is called, and so on. So they’re acclimated when it comes time for getting the hang of tricks, which are more complicated. A kitten can get “Sit” and “Come,” too, but “nobody ever does it for them,” Dr. Borns-Weil points out. “So you’re trying to train an adult cat to do tricks when it never learned the basics of learning while very young. They have no idea that they can operate on their environment to get a reward in response to cues from us.”

The other issue, the doctor says, is that cats are not as oriented toward people and toward working in partnership with us as dogs are. They didn’t evolve that way.

These barriers — not learning how to learn as kittens and not being selected by us for 10,000 years to form close relationships, as dogs have been — means that teaching tricks requires more patience. But it can be done. Dr. Borns-Weil’s assistant, veterinary technician and trainer Sandra Robbins, has even taught her cat to play dead (fall over to the side) when she points a finger and says “Bang.” Such efforts are worth it, because time with your pet means her life inside your house is more enriching, less boring, and also increases the bond between the two of you.

How to teach tricks

Dr. Borns-Weil recommends the clicker method for training cats. As soon as a cat does what you want, you click the clicker and then dispense a desired treat. The clicker lets him know the reward of a treat is coming.

That’s particularly important for cats, Dr. Borns-Weil says, because a cat might not get around to actually eating the treat and deriving pleasure from it for a while. A dog will scarf up a morsel of food, but “cats will sniff it first, push it around, nose it, see if you’re trying to poison them,” the behaviorist comments. They need the clicker to know the reward is there. “It’s like a notification by e-mail that your pay check has been deposited,” she says. “You might not have the money in your hand, but you can feel satisfied to know it’s available for you to pick up when you’re ready.”

Many cats do well learning to sit as a first “trick,” Dr. Borns-Weil says.

Step 1: Hold a piece of food in your hand and slowly move it in an arc over his head so that he leans back and lowers his bottom to the floor. As soon as his bottom touches the floor, click and reward. Repeat five or six times or until it appears that he knows what to do.

Note: If he does not sit all the way or stands on his hind legs and turns to get the treat then, you must shape the desired behavior. To do so, click gradually better and better approximations of the desired behavior until you obtain the right response. For example, if he will tip his head up and very slightly lower his back end when the treat is moved over his head, capture that behavior with a click and a treat. Repeat a few times until you get a slightly deeper bend of the back legs. At that point, only click and reward the new, better approximations and no longer click and reward shallower bends of the knee. Continue in this way until the full sit is achieved.

Step 2: Once a full sit is achieved with the “lure,” add the “sit” cue as he is lowering his backside. Click and reward. Repeat six to seven times.

Step 3: Repeat the above step but stop using the food to lure. Use just an empty hand to gesture as if you were holding a treat. Gradually fade out the hand motion and click and reward the sit only when he obeys in response to the verbal cue.

It will take trial and error. One day, your cat may stay with it for a few minutes. Another day, he’ll walk away in 30 seconds. “‘Nah, I’m done. It’s boring,'” as Dr. Borns-Weil puts it. Go with the flow. The idea isn’t to make him jump through hoops like a dolphin. It’s just to interact with him, to have some fun.

A cat can learn not only to sit with a clicker but also to come, give a high 5, and even stop fighting with a cat he doesn’t like and go to his own perch, the doctor says. If you stay calm and don’t expect too much too fast, he will make progress.