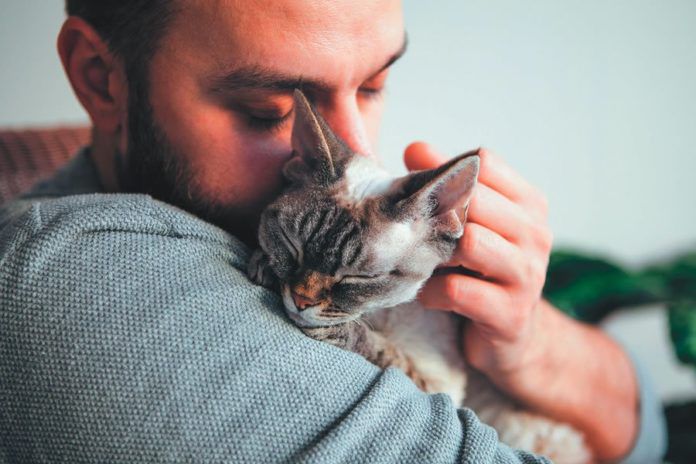 What cats need often doesn’t jibe with the way we live our lives. We’re gone all day, leaving them with no interaction, then come home and want to spend the evening petting and handling them.

“But that’s not how cats are wired,” says the head of the Tufts Animal Behavior Clinic, Stephanie Borns-Weil, DVM. “Cats are high-frequency, low-intensity interactors,” she explains. Most want a fair amount of together time — in small doses.

Think of how cats get along with each other and with people, she says. With either species, they often will do a bit of allorubbing [rubbing their body against another’s] and then move on. “Of course, there are exceptions,” she adds. But in the main, they want physical encounters with their owners to be brief.

The way to figure out just how much petting and caressing your cat desires is to let the choice remain hers. “I’m not a big fan of absent-minded petting when it comes to cats,” Dr. Borns-Weil says. “What I do is pet the cat and then stop. If she rubs my hand or nudges me with her head, I pet some more. And then stop again. If she wants more still, she’ll ask me. If she’s done, she’ll walk away.”

“Petting is a conversation,” the doctor says, and when you approach it as one, you’re not doing all the talking and drowning out what your cat has to tell you. You’ll also develop a sixth sense for the right amount of physical interaction between the two of you because not overstepping allows you to better learn and perceive your cat’s cues when she’s done.

Cats are very polite about saying “No thank you,” the doctor comments. “They’ll flick their tail a little bit, or their ears will go down, or their faces will go a little rigid.” It’s their way of saying they’re not enjoying the petting anymore. “And it’s better to get ahead of it.” If you’re going on what feels right to you rather than to your pet, you’ll miss what she’s trying to tell you. It’s at that point that cats lash out with biting or scratching. “Excuse me, I’m done now” becomes “Hey, cut it out!” In effect, she has to go from a soft voice to yelling.

“A cat may want to sit on your lap and not get petted,” the doctor says. “Or she’ll want to be petted just three times and then just sit on your lap.” If you keep stopping and waiting before she stops you, where she wants to draw the line becomes second nature.