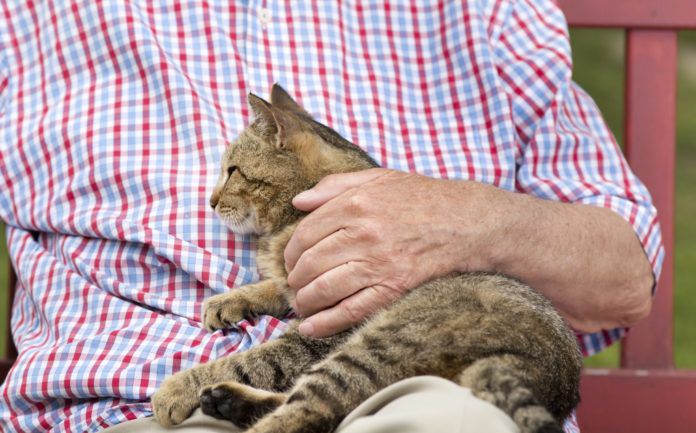 The phenomenon of purring has fascinated people for ages. Veterinarians and animal behaviorists agree on why cats purr, but the mechanics of purring and whether purring triggers self-healing continues to stir debate.

Cats purr for many reasons — when feeling contented as well as while under stress.

When feel-good hormones called endorphins are released, explains Dr. Dodman, the purring mechanism is activated and purring results. Endorphins are released as a result of pain and stress (they numb/attenuate it) or pleasure (they reward good/positive things cats do — exercise, eating delicious food, relaxing, being groomed/massaged). The chemical changes that initiate purring occur in the brain. Neural messages are then dispatched to the laryngeal muscles and diaphragm. Cats use their diaphragmatic muscles to push air back and forth across structures in the larynx called vocal cords, causing them to vibrate. As air passes across them, the vocal cords move and make sounds like a flag flapping in the breeze.

“Purring is uniquely feline, like the bark is to wolf-like animals and domesticated dogs,” says Dr. Dodman. “Cats can make purring sounds with their mouths open or shut and when they are inhaling or exhaling.”

Among all cats, animal experts suggest that those who purr can’t roar and those who roar can’t purr. So, bobcats and mountain lions purr, but tigers and lions roar because their larynxes are not stiff enough to produce the purr vibrations.

What about the notion that the low frequency of purrs increases bone density and hastens healing?

“NASA did some research on bone stress among astronauts who spent long periods of time at zero gravity,” says Dr. Dodman. “Musculoskeletal systems need some amount of stress in order to maintain their strength. Researchers reported that healing of bone is optimal at rates between 25 and 50 vibrations per second (hertz) — which just happen to be about the same hertz levels found in purring.”

He adds, “Too many have jumped to the conclusion that since cats purr at this low-frequency level, it must heal their bones. I’m not convinced. Scientific articles suggest purring may help healing, but so far, there hasn’t been a published report that I feel substantiates that claim.”

For now, this may remain one of purring’s unsolved mysteries. — Catnip staff