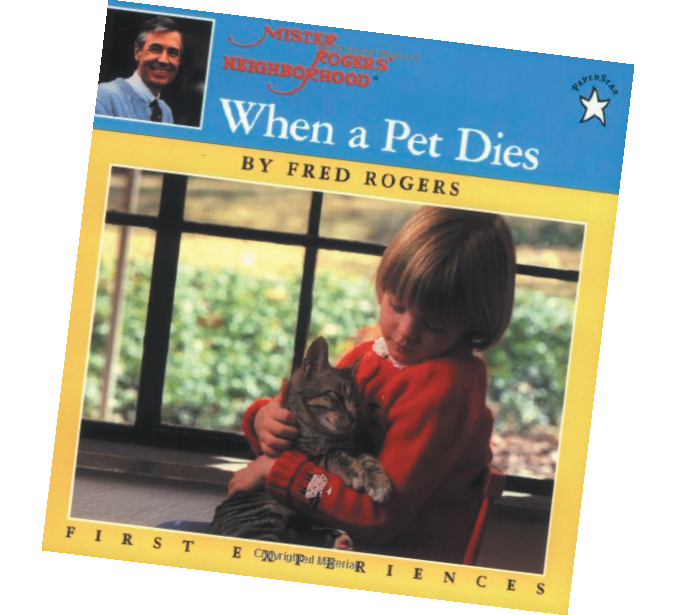 There are literally dozens of books about grieving over the loss of a pet. It’s an industry unto itself. But Fred Rogers’ book, When a Pet Dies, stands out among the others, even though it was first published more than 30 years ago. The book is meant for preschoolers as well as those in the early grades but, of course, also for their parents, who will go through the pages with their young ones.

It’s the simple language and straightforward messages in the slender paperback that make it so enduring. For instance, at the beginning of the book, Rogers says that when he was a youngster and his own pet died, “I was very sad, and so were my parents….My parents encouraged me to talk about how I felt, and they let me know that grieving was a natural, healing thing to do….I discovered it was all right to cry when somebody you love dies. I learned, too, that loss takes time to understand.”

The book also hits home because it expresses a multitude of truths that are universally felt by cat lovers but perhaps rarely expressed. And it expresses them clearly even though the book is more pictures than words, with just a line or two of copy on each beautifully photographed page. Among the truths that let a young child know grieving over the death of a pet is okay (while also teaching valuable lessons):

The book goes on to let children know it’s okay to feel angry and “wonder why such a sad thing had to happen.” It explains, too, the difference between dying and going to sleep and makes the point in an age-appropriate way that some people feel guilty that they didn’t do enough to keep their cat from dying even when there was nothing they could have done. Significantly, Rogers also articulates that at some point, the good memories will take over for the sad feelings.

Even though the book is for very young children, it doesn’t tell any white lies to gloss over difficult facts. It makes clear instead that “sad times are part of everyone’s life” and that it isn’t always easy to talk about sad and angry feelings. The book also suggests that parents share their own real feelings with their child about a family pet’s dying.

While a religious man himself, Rogers never refers to ideas about heaven or the afterlife or the “Pearly Gates,” as a number of other books on grieving over a pet do. Instead, he says that “as for what happens after death, I believe that’s best discussed in light of each family’s traditions and beliefs.”

Rogers also uses photos of children and their parents from different races and ethnicities. It would be hard for a child to look at the pictures in this book and feel, “it’s not about me.”

We highly recommend this book for helping a small child get through a cat’s (or even a person’s) death in an honest and straightforward yet age-appropriate way. Others do, too. The Bulletin of the Center for Children’s Books calls When a Pet Dies “a sensitive and sensible first book about death.” And Booklist says it is “filled with warmth and reassurance.”