You attached a feather to a string for your cat to chase as you dragged it along the floor, but she didn’t go for it. You bought her a squeaky toy that she sniffed and batted once and then paid no attention to. She also has a little grey fabric mouse with catnip that she “murdered” a few times but that now sits in a corner collecting dust. She’s just not a pet who gets much out of toys and is more into lying around than active engagement, right?

It’s not what it seems. Your cat would very much like some action. You’re just choosing the wrong toys — or not switching them around often enough, or not playing with your cat often enough.

It’s definitely a matter of trial and error. Don’t give up on getting your cat to play just because it didn’t work the first couple of tries. The trick is to find things that will pique your pet’s senses in addition to her predatory instinct — and to buy or make them on the order of once a month rather than once in a very long while. You need to rotate them, too. Put something away for a bit and reintroduce it another day, just like you would for a toddler.

Smell. Many, but not all, cats are turned on by the odor of catnip. Some like things scented by lavender. A toy that was boring unscented may get a lot of attention if it smells like lavender.

Touch. Maybe your cat would like a knobby toy that stands still so she can use it for face bunting (rubbing). In some cases, she might find
the feel of something gauzy or feathery very interesting as you pull it away from her.

Hearing. The same cat who is bored by having a feather pulled along for her might get more excited if it were a little bell that was “scuttling away.” The sound could potentially increase her interest in a chase.

Sight. What toy might intrigue your cat because of the way it looks? Is it a ball that sparkles or lights up when you toss it along the floor? Is it a flashlight that you shine on a wall for her?

Taste. Enriching your cat’s lifestyle with taste doesn’t have to mean feeding her more calories — or even different types of food. How about buying her some cat grass to nibble on? She may like the texture as well as the taste. And put some of her meals into food puzzles or other toys. Coaxing food out of those will help satisfy her hunting instinct.

Of course, the most important factor with all of these suggestions is you. Your cat would much rather play with someone than by herself. Even a chest full of novel toys is boring for a cat if she’s left by herself with them. That’s like an endless game of solitaire. 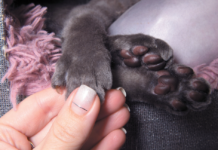 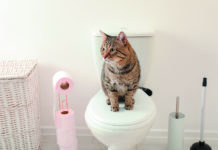 Yes, You Can Train Your Cat to Use the Toilet. But Should You?