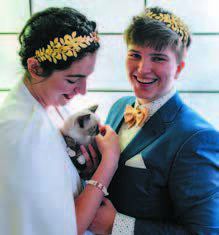 When the Quaker meeting house where a couple married wouldn’t allow a cocktail hour because of a no-alcohol rule, they decided on a kitten hour to keep the guests occupied while they had family pictures taken. Guests snuggled with six kittens from the Seattle Animal Shelter (with volunteers on the scene to make sure they weren’t over-handled) and were asked to donate to the shelter as wedding gifts.

You could say the idea came in tribute to the couple’s two cats left at home — Ladybird and Pangur — who were already well into adulthood and would not have liked to be removed from their environment to be handled by a bunch of strangers in a strange place. Very young kittens, on the other hand, benefit from gentle handling because it gets them comfortable with the idea of being held by people once they find homes.

The icing on the cake, so to speak, was a figurine of two cats on top of the actual wedding cake. And the happily ever after was that all the kittens ended up being adopted.