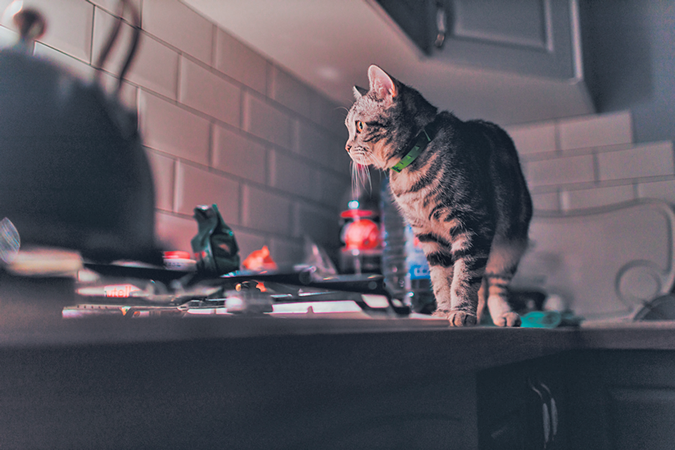 Does your 12-year-old cat seem, well, a little different than she did when she was younger — perhaps not seeming to recognize you or other familiar people, or unable to maneuver around obstacles she used to find easy to navigate? Is she less interested in interacting with you, or perhaps more clingy, or anxious? She may have feline cognitive dysfunction, the cat equivalent of Alzheimer’s disease. And if she does, she’s not alone.

Feline cognitive dysfunction afflicts more than 55 percent of cats ages 11 to 15 and more than 80 percent of cats who are at least 16 to 20, according to at least one estimate. The exact cause is unknown, but the signs can be myriad. They include:

Disorientation or confusion, exhibited by getting lost in familiar places, staring at nothing in particular, or aimless wandering.

Anxiety and restlessness, perhaps made clear by more vocalizations in a more urgent tone or more irritable behavior.

Decreased activity coupled with apathy, which you might notice as less interest in self-grooming and eating or in whatever’s going on around her.

Lessening of learned behavior, most notably eliminating outside the litter box she has used for years, eliminating in sleeping or eating areas, or seeming unable to recognize you.

Social behavior changes that could go in the direction of becoming clingy and needing constant reassurance or becoming less interested in being stroked or interacting in general.

Changes in sleeping cycles, indicated by more restless sleep and more nighttime awakenings (sometimes coupled with meowing in the wee hours) and/or more sleep during the day.

The thing is, cats are prone to all kinds of conditions as they age, and their signs often overlap with those of feline cognitive dysfunction. For instance, any illnesses that cause pain, like arthritis, could cause a cat to become less interactive and more apathetic. Pain also keeps cats up at night, just as it does people, and can make them much more irritable. And, of course, a cat in pain may not be able to hop into her litter box as easily as she once did. Furthermore, impaired sight or acquired deafness could result in what looks like disorientation but isn’t.

That’s why, if you suspect your older cat has developed feline cognitive dysfunction, you should take her to the veterinarian for a work-up. You might be surprised to find, for instance, that what seems like a loss of memory about the purpose of the litter box is simply the result of arthritis that makes it too hard to climb over the sides; or a urinary tract disease that affects her toileting habits. (Inappropriate elimination is the most common reason older cats are seen by behaviorists, says the ASPCA. But inappropriate elimination should first be evaluated for any possible medical causes.)

Once medical problems are ruled out, the cat’s doctor is in a better position to identify cognitive dysfunction as the culprit for changes in her behavior.

You can’t stop feline cognitive dysfunction in its tracks, nor can you reverse its course. But you can slow its progression, giving you more time with a cat that most resembles the one you originally fell in love with and also giving your cat more time to be herself and enjoy her life. How?

1|Provide plenty of mental stimulation and physical activity. Run that laser beam across the walls. Pull a string and see if she chases it. Give her food puzzles to work on if she’s aware enough that she can make use of them. The more a cat uses her brain, and her body directed by that brain, the more slowly she will lose her mental capacity. She also has a better chance of feeling tuckered out at night and sleeping more soundly.

2|Stick to the routine. Because memory is no longer nimble in a cat with cognitive decline, don’t start feeding her differently (with a food dispenser as opposed to your own hands), and don’t move her food or water bowl or litter box. Don’t rearrange the furniture, either.

3|Talk to your vet about feeding your cat a brain-nourishing diet. Some cat foods contain more antioxidants and omega-3 fatty acids than usual in the belief that they help keep memory intact. Evidence for their effectiveness is much more anecdotal than scientific, but they’re a can’t-hurt-might-help option.

4|Speak with the doctor about prescribing selegiline hydrochloride. A monoamine oxidase inhibitor, it has been approved only for use in dogs, but some people report that off-label use in cats has helped mitigate symptoms of cognitive loss.

5| If necessary, talk to the doctor about prescribing an anti-anxiety medication. If your cat’s old and at a point that she can’t be calmed down by you, exhibiting frequent fear and fretting, you can at least tamp down on that aspect of the cognitive loss she’s experiencing. A bonus: anti-anxiety drugs may help reduce excessive vocalizations.

If your cat is urinating or defecating outside her litter box as a result of feline cognitive dysfunction, consider taking the following steps. They’re simple but can sometimes prove effective.

➤ Make even more litter boxes available. You should have one more litter box in your home than the number of cats you have, but in this case, try putting one on every floor of the house. A disoriented cat may forget where the litter box is or how to get to it, but the closer she is to one, the more likely she will use it.

➤ While keeping your litter boxes where they have always been, add ones in spots that are easy to find. Many people, understandably, want litter boxes out of sight. But that might not be best for a cat with a fading memory.

➤ Use litter boxes with low sides. Anything perceived as an obstacle can keep a confused cat from doing what she’s supposed to.