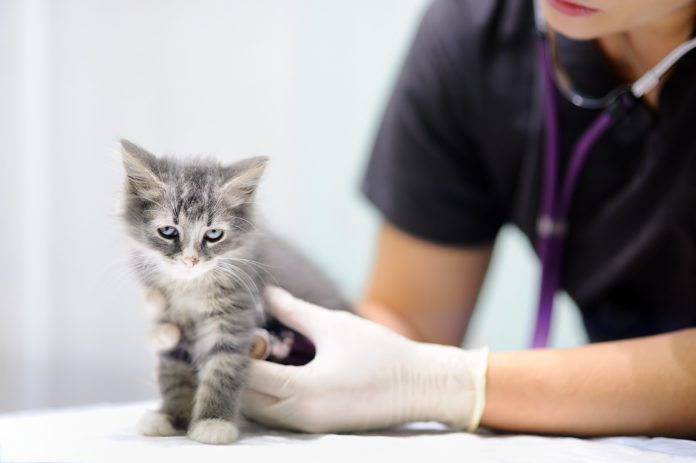 Perhaps the most troublesome of all feline parasites are various types of worms that inhabit a cat’s gastrointestinal tract — the stomach and intestines. Among these invaders, the most frequently found are roundworms, which are classified as nematodes — worms with distinctively cylindrical, unsegmented bodies.

The roundworm, typically about three to five inches long, is known to thrive throughout the United States and can survive in any climate. According to Michael Stone, DVM, a clinical professor of small animal medicine at Tufts, “Infection with roundworms is very common, approaching 100 percent of all kittens in the U.S.” In most cases of roundworm infection, a cat will host the larvae without harmful consequences, since the larvae can remain dormant for years.

“An infected cat may show no signs of illness, and the roundworm eggs will be discovered incidentally during the course of a veterinary fecal exam,” explains Dr. Stone. “In some instances, the worms are spotted in a cat’s feces or vomit.” And some infected cats, he adds, will take on “a pot-bellied appearance” caused by the accumulation of worms in the gut. If a large number of the larvae hatch inside an infected cat’s body and develop into mature worms, they can cause serious vomiting and diarrhea. And if 40 or 50 of them collect in an animal’s intestine, they can create a life-threatening blockage. Roundworm infection is especially dangerous for kittens and for older cats with other health problems.

How cats get infected

There are three ways a cat can get worms: by ingesting larvae in soil that has been contaminated by an infected cat’s feces; by eating the tissue of a rodent or other intermediate host; or by ingesting worm larvae that are present in the milk of an infected queen. In addition to roundworms, other types of parasitic worms that may affect cats include hookworms, whipworms, tapeworms, lungworms and heartworms.

Among these, hookworms pose a special threat to kittens, whose bodies and immune systems are undeveloped. These creatures cause blood to leak from the intestinal wall into the small bowel of their host; if not treated promptly, the resulting blood loss can lead to potentially fatal anemia. Fortunately, Dr. Stone points out, hookworm infections are comparatively rare in the United States.

Whipworm infections — also rare in the U.S. — typically occur in a cat’s lower intestine and will rarely pose a serious threat to an animal’s health. Indeed, a minor infection may not produce any clinical signs at all. Extensive infections, however, may cause acute inflammation, difficult bowel movements, severe diarrhea, anemia, and weight loss in an affected cat. The eggs produced by a whipworm can survive for a long period of time — as long as five years in cooler climates. And an infection is typically resistant to medical treatment; elimination of adult or larval whipworms may take several months of treatment, and reinfection from a contaminated environment is common.

Tapeworms, so named for their long, slender appearance, possess the ability to grab onto tissue (as do hookworms). Neither adults nor larvae have digestive systems. Instead, tapeworms absorb nutrients from their surroundings through the surfaces of their bodies. According to Dr. Stone, cats become infected with tapeworms mainly by ingesting fleas or the flesh of a larvae-hosting rodent. Tapeworms aren’t nearly as harmful to cats as other types of worms, but if a cat has a very serious infection, she can experience severe bouts of vomiting or diarrhea. Owners are likely to detect the presence of tapeworms by noticing small, white packets of eggs that are sloughed off by the worm and tend to be plainly visible in an animal’s stool.

Lungworms are especially tiny — adult females are about one-third of an inch long; males are considerably smaller. A cat will typically get them into her system by eating their larvae, which exist naturally in the tissues of snails, slugs or small rodents that habitually ingest these intermediate hosts. Once inside the cat, the larvae mature, migrate out of the gastrointestinal tract, and take up residence in the animal’s lungs, where they grow to adulthood, and proceed to lay eggs. Neither the lungworms nor their eggs obstruct the airways. However, an affected cat’s immune response to the presence of maturing larvae and the resulting inflammation and swelling of the airways may cause lung tissue damage and respiratory distress.

The danger of heartworm

Heartworms typically infect a cat through a mosquito bite, in which the mosquito deposits larvae that it has picked up from another animal into the bite victim’s bloodstream. Over time, these larvae thrive and develop in the bitten cat’s body, initially in the subcutaneous tissues directly beneath the skin and eventually in the right ventricle of the animal’s heart, in her lungs and in the arteries associated with those organs.

The mature parasite eventually resides, for the most part, in the pulmonary arteries, which carry blood from the heart to the lungs. In an advanced infection, the worms damage the walls of these arteries and impede the passage of blood through them, which results in excessive strain on the heart as it attempts to pump blood through the packed vessels.

Blood tests are required to reveal a heartworm infection; to confirm or rule out the suspected presence of another type of worm infection in the intestinal tract, says Dr. Stone, a veterinarian will typically conduct a fecal flotation test.

Numerous medications are available that are both safe and effective in preventing — and getting rid of — worms. The frequency with which a cat should be dewormed will be determined by a veterinarian and will depend largely on an animal’s age, the apparent severity of worm infection and the animal’s general health.

For adult cats, the American Association of Veterinary Parasitologists (AAVP) and other organizations recommend the following:

-All adult cats should be tested and dewormed periodically;

-Females should be dewormed prior to giving birth and nursing;

-Nursing queens should be tested and dewormed routinely;

-All newly acquired cats should be dewormed immediately.

Additionally, the AAVP notes that the milk of a nursing mother cat can contain the larvae of intestinal worms, which — if nothing is done to stem their proliferation — may cause life-threatening illness in her kittens.

For this reason, AAVP strongly recommends that all newborn kittens be tested for intestinal worms at three weeks of age and be given medications that will kill the parasites. Additionally, Dr. Stone advises, “Kittens should be routinely dewormed at six, eight and 10 weeks of age.” — Tom Ewing