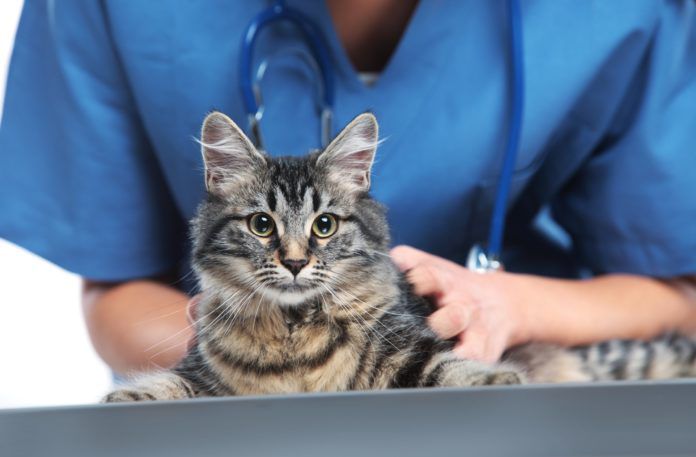 Although the pancreas is a comparatively small organ, typically weighing only an ounce or so, your cat’s health relies on its smooth functioning. Indeed, inflammation of this vital organ — a disorder referred to as pancreatitis — can imperil a cat’s life.

According to Michael Stone, DVM, specialist in internal medicine at Tufts, the pancreas performs two crucially important roles, one of which — the endocrine function — involves the production of certain hormones needed to manage levels of blood sugar. The other role that the pancreas plays is the exocrine function. The major activity associated with this function is the production and secretion of a potent liquid rich in enzymes that eventually pass out of the pancreas and into the small intestine to assist in the digestion of fats, proteins and carbohydrates.

Normally, these digestive enzymes are sequestered in tiny droplets that prevent their coming into direct contact with pancreatic tissue. In pancreatitis, however, these enzymes start working while still inside the pancreas and begin feeding on the tissues of the organ itself, since that tissue is also made of fat, protein and carbohydrate.

Although pancreatitis is the most common disorder associated with the feline pancreas, studies have indicated that the affliction occurs in less than two percent of the general cat population. Cats of both sexes and of all ages and breeds appear to be similarly vulnerable. According to Dr. Stone: “All cats, unfortunately, are at risk, regardless of age, breed or body condition. We see pancreatitis in thin and overweight cats, both young and old.”

Some research suggests that this disorder may be caused by the ingestion of insecticides or other toxins or by the presence of too much fat in a cat’s diet. In some cases, physical trauma — being hit by a car, for example, or falling from a great height —has been associated with onset of the disease. Various infectious disorders, such as feline herpesvirus, have also been cited as possible causes of pancreatitis, as have such factors as adverse drug reactions, inflammatory bowel disease and parasitic infections.

However, according to Dr. Stone, “We honestly don’t know why the feline pancreas becomes inflamed in the majority of cases. This is incredibly frustrating for veterinarians because we don’t know what to recommend in order to prevent recurrences.”

Signs to look for

The most common clinical signs of feline pancreatitis include lethargy, anorexia, dehydration and low body temperature. “The primary presentations,” notes Dr. Stone, “are listless behavior and not eating.” Cats with suspected pancreatitis may appear to have high levels of abdominal fluid and may be have a yellowish tinge to their gums and the whites of their eyes. Such signs, however, are common in other disorders as well, such as liver disease.

According to Dr. Stone, “The majority of cats with pancreatitis present with loss of appetite and lethargy. These signs are typically sudden in onset, with illness developing in less than 24 hours. About a third of affected cats will vomit, and some will have tense, painful abdomens.”

Disease progression can take any of various paths. A cat can have a perfectly normal pancreas, but then suddenly develop — for no apparent reason — a severe case of the disease that proves fatal. Or the cat may recover from the acute episode and never again experience a pancreatic problem. Sometimes, however, a cat will recover from an initial acute attack and then experience intermittent bouts of the illness in the future. With each occurrence, gradual scarring of the pancreatic tissue will become increasingly apparent over time.

Eventually these recurring episodes will take their toll on the organ’s ability to function efficiently. To be on the safe side, Dr. Stone advises, owners should seek veterinary counsel if a cat with a typically healthy appetite is lethargic and refuses to eat — even for just a very brief period of time. The standard diagnostic procedures might include a medical history of the animal, a thorough physical examination, blood tests and abdominal ultrasound.

Radiography tends to be of little value, he notes, since pancreatic abnormalities are not clearly visible on X-rays. But X-rays might be done in an effort to rule out other disorders, such as an intestinal obstruction, which can have symptoms identical to those of pancreatitis. “In most cases,” says Dr. Stone, “a diagnosis of pancreatitis is made by excluding other conditions — such as dietary indiscretion, kidney failure or intestinal blockage — and by seeing inflammation in the area of the pancreas on ultrasound.”

Unfortunately, the only way a definite diagnosis of pancreatitis can be made is through a biopsy, but this involves a surgical or laproscopic procedure that may not be advisable for a seriously ailing, physically debilitated animal.

In many cases, an assumption of pancreatitis has to be made on the basis of physical exam, bloodwork and ultrasound, at which point treatment can be initiated. This can present a challenge, since a definitive, uniformly effective treatment for feline pancreatitis has yet to be developed.

“Currently, supportive care — making sure that the patient is comfortable and is eating properly — is our treatment of choice,” says Dr. Stone. “For cats who refuse to eat, a feeding tube will be used. With supportive care, most affected cats will improve within one to four weeks.”

In most cases, an affected cat will require hospitalization. “This disease is a mystery in many respects,” says Dr. Stone, “and we look forward to new developments in its diagnosis and management.” — Tom Ewing