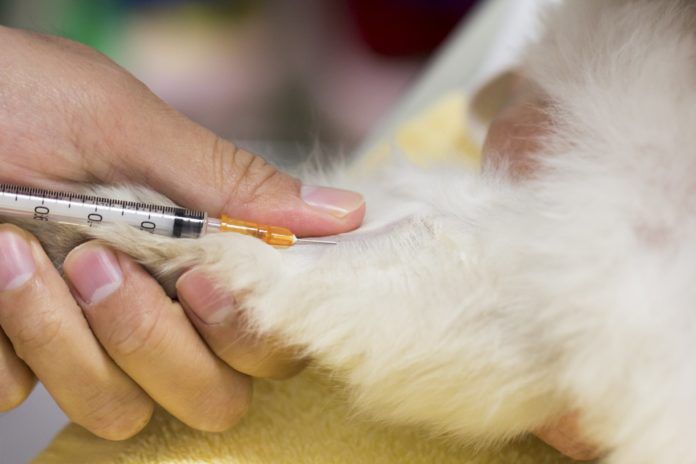 The main function of your cat’s blood is to transport oxygen and nutrients to the tissues throughout her body and to carry carbon dioxide and wastes away from those tissues. But her blood plays many other roles as well, contributing to such diverse processes as cell development, tissue repair and the warding off of infection.

In light of the life-sustaining activities routinely carried out by this fluid, few veterinarians would dispute the wisdom of having your cat’s blood periodically evaluated. Indeed, some veterinarians believe that a thorough blood test should be done yearly as a component of a cat’s annual physical exam.

However, says Mary Labato, DVM, DACVIM, a clinical professor in the department of clinical sciences at the Foster Hospital, annual blood testing would be excessive and unnecessary for most cats. “An annual test is certainly in order for all elderly cats — those older than 10 or 12 years of age,” explains Dr. Labato. Moreover, she advises, blood testing is needed for any cat who is about to undergo surgery.

Certain blood tests are advisable for a kitten who will be receiving her first vaccination series as well as for a newly adopted cat — especially if her medical history is unknown — in order to check on her feline immunodeficiency virus (FIV) and feline leukemia virus (FeLV) status. Dr. Labato also recommends that a complete blood evaluation be done for any cat showing signs of illness such as fever, weight loss, vomiting, diarrhea, increased thirst or frequent urination.

Like human blood, feline blood is made up of red cells (erythrocytes); white blood cells (leukocytes); platelets; and a fluid (plasma) in which the cells and other life-supporting blood components — such as hormones, proteins and salts — are suspended. All of these components, in their proper balance, are required to maintain a cat’s physical well-being.

A thorough blood test requires the drawing of about one-twentieth of an ounce of an animal’s blood, usually from one of the two jugular veins, which run down either side of a cat’s neck, or from a vein in one of her back legs. Such a test evaluates the blood sample in two separates processes — a complete blood count (CBC) and a blood chemistry panel.

What the CBC provides

The CBC (also known as a hemogram) includes the following measurements and evaluations:

A red blood cell count measures the actual number of red cells in a given amount of blood and discerns any abnormalities in their shape, size, or color. The amount of hemoglobin — a substance that carries oxygen throughout the bloodstream — is also assessed.

A white blood cell count evaluates and counts the number of leukocytes (including lymphocytes, neutrophils, monocytes, eosinophils and basophils), all of which are produced in the bone marrow or other tissues and play various roles in attacking and destroying disease-causing organisms. A high white cell count may indicate, for example, that an animal is harboring an infection, is under extraordinary stress, or is affected by a serious and chronic illness, such as leukemia.

A packed cell volume assessment (hematocrit) reveals the proportion (percentage) of the blood volume that is composed of red blood cells. A low PCV might indicate that the animal is anemic, Dr. Labato points out; either her bone marrow isn’t producing the cells in sufficient number or they are somehow being lost or destroyed. A high concentration could mean that the cat is dehydrated.

A platelet count measures the concentration of the disk-shaped blood cells, that promote blood clotting (thrombocytes).

The CBC also measures the protein levels in blood plasma. Low levels of these proteins suggest the possibility of liver, kidney or gastrointestinal malfunction, while high levels may indicate the presence of infection, chronic inflammation or some types of cancer.

The other process — the chemistry panel — focuses on the chemical components suspended in the clear, watery content (serum) of the blood after it has been separated from the cells and from certain proteins that are needed for clotting. These tests measure the presence in circulating blood of a dozen or more substances, such as blood urea nitrogen (BUN) and creatinine — chemicals that are normally found in excreted urine.

Therefore, the chemistry panel a valuable tool for assessing the health of a wide range of body systems. It can, for example, reveal problems in an animal’s organ function. It can measure the levels of vitally important hormones. And it can determine whether the blood is sufficiently rich in electrolytes — chemical compounds that regulate the exchange of electrical charges across cell membranes.

Abnormal (or subnormal) blood levels of various substances may indicate damage or disease involving the kidneys, liver, muscles or glands. For instance:

High blood levels of BUN and creatinine can indicate that an animal’s kidneys are not adequately filtering metabolic wastes.

Abnormal calcium levels may indicate the presence of tumors, kidney disease and other disorders.

Low levels of potassium may explain an animal’s chronic lethargy or lack of muscle control.

In addition, a blood chemistry panel measures total protein content, which is composed of albumin and globulins. High or low blood levels of these proteins can influence many bodily processes, including the ability to retain water and to defend against infection.

Why it is so important

The value of basic bloodwork is indisputable, stresses Dr. Labato. Along with patient history, a thorough physical exam, and urinalysis, the test is well established as a fundamental element of modern veterinary practice. Animals who are about to have serious surgery, for example, will almost always undergo a CBC and chemistry panel to make sure that they can tolerate anesthesia.

In some cases, a routine CBC or blood chemistry panel may not be adequate for a specific purpose, such as looking for infection in a specific organ or gauging an animal’s endocrine (hormone) function. These and other comparatively complex tests may require that a cat’s blood sample be shipped to a lab that specializes in such tests, in which case the results may not be available for days or weeks, while a local veterinary clinic may have the findings of a routine CBC or blood chemistry panel within a matter of hours.

A routine blood test is likely to cost about $100. But it is money well spent, says Dr. Labato, since it is far better to spot a feline health problem early and to prevent it from getting worse than to try to deal with the condition after it has progressed. — Tom Ewing