Home CAT HEALTH & MEDICINE What is IBD and How Is It Treated in Cats?
Print
Email
Facebook
Twitter 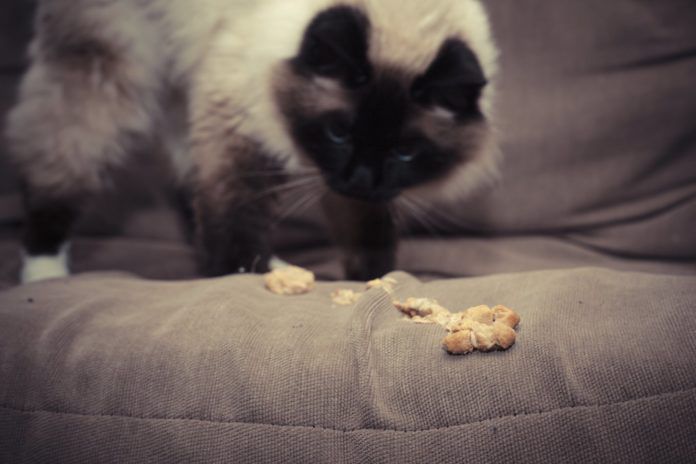 Your cat’s appetite seems to be robust, and she apparently likes the food you put in her bowl each morning and evening. Since you brought her into your home as a kitten six years ago, she has never been outdoors, so she’s had no exposure to diseases that might be carried by other cats in the neighborhood. And you’ve always made sure that she gets her semi-annual veterinary checkups and required vaccinations.

But for the past month or so, she has been experiencing repeated bouts of vomiting and diarrhea — sometimes once or twice during a single day. And she appears to be losing a bit of weight.

IBD Is Common In Cats

It’s quite possible that your cat is suffering from inflammatory bowel disease (IBD), an uncomfortable and frustrating intestinal disorder that is common among middle-aged cats. According to Dr. Linda Ross, associate professor of small animal medicine at the Cummings School, “Gastrointestinal tract problems in general are very common in cats. We see a lot of them — weekly, if not several times a week — in our referral practice. I would guess that veterinarians at a primary care facility see multiple cats each week with one type of intestinal disease or another, and IBD is one of the most frequently diagnosed.”

The condition, mainly characterized by chronic vomiting and diarrhea, is widely thought to be the consequence of a disorder involving the feline immune system. For example, microscopic analysis reveals that abundant immune system cells are consistently found in the lining (mucosa) of an affected cat’s intestines. This suggests that IBD may be the result of an abnormal immune system response to the normal bacterial flora that are present in the gut, since this host response, mounted over time, can eventually damage the intestinal lining and cause inflammation.

However, intestinal inflammation may also be caused by parasites or other infectious agents, such as fungal organisms. Another possibility is that certain dietary substances may act as antigens that stimulate aberrant host immune responses. Therefore, says Dr. Ross, “We think the cause of IBD involves some kind of immune reaction, but we don’t know that for certain at this point.”

For now, she adds, feline IBD can best be described as “some kind of immune reaction that occurs in the intestinal tract as a reaction to antigens in a cat’s food or to the bacteria that are present in the intestinal tract.” Unfortunately, the epidemiology of the IBD — its patterns of incidence and prevalence — has not been well identified at this point. Although the disorder is most frequently diagnosed in middle-aged cats, age in itself has not yet been identified as a risk factor for the condition. The disorder seems to be distributed about equally between males and female, and all breeds appear to be similarly vulnerable.

Most Common Signs of Inflammatory Bowel Disease in Cats

Frequent vomiting and diarrhea — often accompanied by noticeable weight loss — are the most common clinical signs of IBD, although other indications that a cat may have the condition include a decline in appetite, frequent passing of gas, and an audible rumbling from the abdominal area. The signs tend to vary depending on which part of the gastrointestinal tract is affected. (Vomiting, for example, is more apt to occur when both the stomach and small intestine are involved, while diarrhea is more common when the inflammation is primarily confined to the intestine.)

In the early stages of the disorder, the vomiting may be infrequent. “An owner may think that the cat is trying to bring up a hairball,” says Dr. Ross. “Over time, however, the vomiting will become much more frequent.” If the cat has diarrhea, she notes, the source is apt to be the small intestine, in which case the bowel movements will occur at normal frequency but the stool will be “soft and liquid in consistency.” If the large intestine is involved, the frequency of bowel movements will increase, the cat may strain while defecating, and there may be blood in the stool.

Overall, IBD is a disease in which the incidence of illness (morbidity) is relatively high but the rate of death caused by it (mortality) is relatively low. In all cases, prompt veterinary diagnosis is extremely important, since the clinical signs of IBD are similar to those associated with a wide variety of other diseases that may be life-threatening, such as cancer of the intestinal tract. To exclude other possible causes of the clinical signs, a veterinarian is likely to perform a complete blood cell count and chemistry panel, fecal examination, and tests to rule out the presence of cancer and viral microorganisms such as the feline immunodeficiency virus (FIV) and feline leukemia virus (FeLV).

Efforts will also be made to rule out the presence of other disorders of the feline bowel, especially infections with intestinal parasites such as roundworms, hookworms and giardia. (In most cases, a cat will be dewormed in order to rule out that possibility.)

If nothing is revealed by these tests, says Dr. Ross, an ultrasound exam is likely to be recommended, which can detect signs of cancer and other diseases. If other bowel disorders are excluded, the veterinarian is likely to assess the patient’s eating habits by placing her on an elimination diet for several weeks to see whether she might be harboring an allergy to or intolerance of an ingredient in the food that she habitually consumes. (In an elimination diet, the animal eats nothing but novel proteins that her system can process without adverse reactions — a regimen known as a hypoallergenic diet.) “This may require several diets,” says Dr. Ross, “before we can be sure that the intestinal problem persists despite changes in diet.”

If no food allergy or intolerance is identified, the patient will then undergo a procedure that is indispensable to a definitive IBD diagnosis — a microscopic evaluation (biopsy) of a small piece of gastrointestinal tract tissue that is obtained from an animal either surgically or by means of an endoscope, a flexible tube that is passed into the tract. (For both procedures — biopsy and endoscopy — the patient must be placed under general anesthesia.)

How To Treat Your Cat’s Inflammatory Bowel Disease

If IBD is definitively diagnosed, she says, the disorder will be treated with a combination of diet and drugs. “Diet is a treatment component,” she points out, “so the patient may be put on a novel protein diet, which may relieve the problem. And the drugs that we’ll use — a steroid, usually prednisolone — will work to suppress the inflammatory reaction. This drug usually works quite quickly to reduce inflammation, within a week or so, and then we’ll try to taper off so that the cat doesn’t have to take the drug for a long time.”

Overall, says Dr. Ross, “The prognosis is pretty good for a cat diagnosed with IBD as far as controlling the disease. But it’s not something that we usually can cure. So even if we get the signs under control, the cat is likely to need dietary management and periodic treatment with immunosuppressant drugs, possibly for life. This will vary from cat to cat.”

She advises owners as follows: “If your cat is vomiting or having diarrhea with increasing frequency — especially if the animal is losing weight — she should be seen and treated by a veterinarian without delay.”