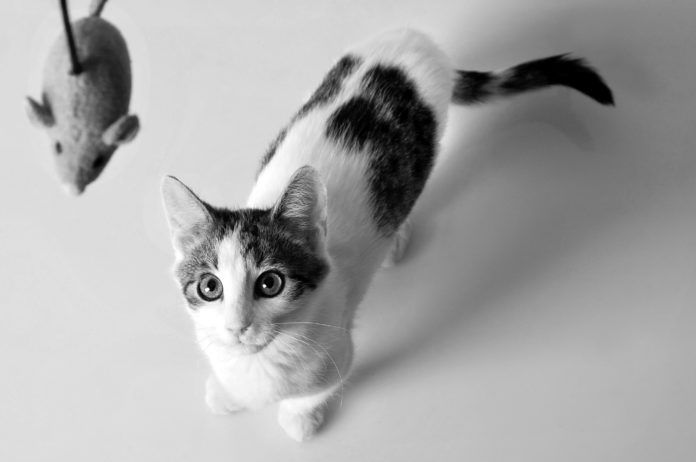 Has your cat suddenly started urinating outside the litter box? Before you scold him for making a mistake, promptly make an appointment with his veterinarian to make sure he doesn’t have a condition called feline idiopathic cystitis.

This painful inflammation of the bladder — which occurs equally often in male and female cats — is sometimes mistaken for a behavioral problem, explains Mary Labato, DVM, clinical professor of small animal medicine at Tufts Cummings School of Veterinary Medicine. Cats associate the pain of urination with the litter box and try to relieve it by urinating elsewhere.

The signs of FIC are frequent urination, urinating outside the litter box and straining to urinate. The latter behavior is sometimes misinterpreted as constipation, according to Dr. Labato, who is board-certified by the American College of Veterinary Internal Medicine. The cat may also vocalize because of the pain caused by urination.

Cats Most at Risk for Feline Idiopathic Cystitis

It’s unknown what causes FIC (hence the term “idiopathic”). Overweight cats that live indoors seem to be most commonly affected. Tony Buffington, DVM, MS, PhD, from Ohio State University’s College of Veterinary Medicine, has studied urinary tract disease extensively, and explains that FIC is a disease of the central nervous system that affects the bladder as well as other organs.

The first step in determining whether a cat has FIC is to rule out other problems such as a urinary tract infection or a urinary stone. Those problems can be diagnosed through radiographs, ultrasound and urinalysis.

Dr. Buffington, who is board-certified by the American College of Veterinary Nutrition, believes the primary therapy for FIC is environmental enrichment — especially if the cat is also obese, has other diseases such as diabetes mellitus, or shows signs of anxiety like hiding, startling frequently or even hacking up a hairball. That’s because eliminating or reducing stress appears to help resolve the signs of FIC.

The theory is somewhat controversial, but the suggestions for managing FIC fall into the category of “it can’t hurt to try.” They include giving the cat access to plenty of fresh water, providing multiple litter boxes that are all kept scrupulously clean, playing with the cat regularly, and making sure he has interactive puzzle toys to stimulate his brain.

Getting the cat to drink plenty of fresh water is probably the primary key to management of recurrent FIC, says India F. Lane, DVM, a University of Tennessee internal medicine specialist speaking at the 2012 Western Veterinary Conference in Las Vegas. This step is important because it helps to dilute the urine and causes the cat to urinate more often. This means the urine spends less time in contact with the walls of the bladder and is less likely to irritate the bladder wall.

“To encourage your cat to drink more water, you might try to empty, clean and refill the water dish twice a day,” says Dr. Buffington. “Some cats enjoy drinking running water, so providing a pet fountain may interest them in drinking more often. Some cats don’t like to push their whiskers into water, so try using a very flat water dish or one with very high sides that’s filled all the way to the top.”

Another way to sneak water into your cat is to switch him to a canned diet. Canned food is approximately 70 percent water, so cats that eat it automatically increase their water intake. Choose any high-quality canned food that is AFFCO-approved.

“If your cat isn’t used to eating canned food, let him gradually adapt to it by offering it in a separate dish next to his usual food at his regular mealtime and then adding a little more every day over a 10-day-or-so period,” suggests Dr. Buffington.

A Clean Litter Box is Crucial

Experts recommend that cat owners scoop the litter boxes at least twice daily. Every week or two, dump out the litter, clean the box with warm water and a mild, unscented dish detergent, and fill with fresh litter.

Environmental enrichment, better known to most of us as play and entertainment, is essential. It can help improve your cat’s mental and physical state, and thereby reduces stress. Some people think cats are happy to just lie around and sleep all day, with occasional breaks for meals, but they are highly intelligent animals that need the stimulation of activity that challenges their brains and bodies. Providing them with food puzzles is a great way to do this, says Dr. Buffington.

Provide a tall cat tree for scratching and climbing, hiding places that he can pop in and out of, and maybe a nice viewing spot in front of a window. Pull a large peacock feather or fishing-pole toy for him to chase. One of the important factors in managing stress and by extension FIC is to give a cat options.

Rather than making changes arbitrarily — especially those that involve food or the litter box — give the cat an opportunity to express preferences by offering choices, says Dr. Buffington. Examples include offering canned food next to the cat’s dry food instead of mixing them together, or providing one litter box with the cat’s usual type of litter and one containing a new type of litter.

“Control and predictability are as important to cats as they are to us, and it’s not unusual for people with chaotic schedules to have cats with FIC,” Dr. Buffington explains.