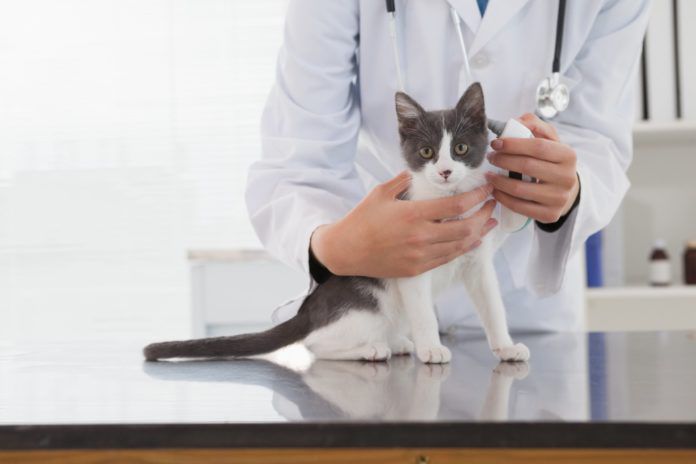 Your four-year-old cat Elton seems to be in perfect health. But about twice a year, he comes down with what appears to be a bad cold, complete with sneezing, coughing, lethargy, nasal congestion and watery eyes. These upper respiratory signs persist for a week or 10 days and then suddenly disappear, much to your relief. But then, five or six months later, the very same symptoms will pay a return visit, linger for a week or two, and repeat their vanishing act — a frustrating cycle that is bound to recur until you seek out proper veterinary guidance and treatment.

A thorough examination of Elton will most likely indicate that he is suffering from an upper respiratory infection (URI) affecting his nose, sinuses, pharynx and larynx. In your cat’s case, the sneezing, wheezing and so forth are probably attributable to the herpes virus, which has been lying dormant in Elton’s system. Every once in a while, after months or even years, the virus becomes temporarily active, which results in the fleeting resurgence of the unpleasant clinical signs — after which the virus goes back to sleep. Once present in a cat’s system, no medication can make such a virus simply disappear.

“The clinical signs of infection are almost always in the nose — sneezing, nasal discharge and the like — similar to cold symptoms in a human,” says Elizabeth Rozanski, DVM, a specialist in respiratory disease; hematology; and emergency and critical care at Tufts. “These signs tend to come on fairly quickly, typically over the course of a half-day or so.” The common signs, which can vary from mild to severe, are usually self-limiting and ultimately harmless. However, secondary diseases may occur that can have long-lasting and potentially severe consequences. These diseases — which most frequently affect kittens — include pneumonia, conjunctivitis and a host of other virus- and bacteria-borne illnesses resulting from the entry of infectious microorganisms into the cat’s system.

The two viruses to blame

According to Dr. Rozanski, the “vast majority” of feline upper respiratory infections are caused by one of two viruses: the feline herpesvirus (FHV), which is also known as the feline rhinotracheitis virus (FRV); and the feline calicivirus (FCV). Bacterial agents such as Chlamydia and Bordatella, which are commonly found in animal shelters, are also known to cause such infections, but far less frequently. Fortunately, none of these disease agents is transmissible to humans. Once present in a cat’s system, no medication can make certain viral agents simply disappear. Over time — many months or perhaps years — some viruses will spontaneously vanish from an infected cat’s body; however, the herpesvirus, once present in the feline system, will remain forever.

Recovered cats will intermittently shed small quantities of the herpesvirus from the throat or nose for the remainder of their lives. These eruptions can be brought on by such factors as stress, the outbreak of some other illness or medications that suppress the immune system.

Upper respiratory infections are, in general, rarely fatal; nevertheless, they can be especially threatening to some cats. Although any cat can become infected, notes Dr. Rozanski, kittens are particularly at risk. Especially vulnerable are kittens born to queens who have not been inoculated and are left to fend for themselves in periods of wet, cold weather, when their resistance is impaired.

“It is uncommon for cats of any age to die as the result of an upper respiratory infection, although the infection can certainly be fatal for a kitten whose health is very compromised,” says Dr. Rozanski. “Usually, an infected cat will eventually get better with or without treatment, like people with colds.”

For the past several decades, vaccines have been available that help protect cats against herpesvirus and calicivirus, as well as panleukopenia, an intestinal virus. Over the years, these vaccines have proven successful in significantly reducing the occurrence and severity of feline respiratory infections. However, outbreaks of these infections continue to threaten unvaccinated kittens and feral cat populations. Moreover, since the vaccines only provide partial protection, some domestic cats can become ill despite being properly vaccinated; and others may fail to receive their shots according to a recommended schedule.

Nevertheless, Dr. Rozanski advises owners to make sure that their cats are vaccinated on schedule, that they are kept indoors as much as possible, and that their environments are clean, dry and warm, which is especially important for the health of kittens.

To significantly reduce the spread of feline upper respiratory infections, owners should make sure that all cats are vaccinated according to schedules recommended by experts. In general, a single vaccine designed to protect against both herpesvirus and calicivirus should be administered when a kitten is between six and eight weeks of age — the period in which the natural immunity that the kitten has been receiving through antibody-rich mother’s milk is diminishing.

Follow-up shots are recommended at three- to four-week intervals until a kitten is 16 weeks old, after which a single booster vaccination should be given one year later, and every three years thereafter. (A vaccine is available to protect against the Chlamydia organism as well, although it is not as urgently recommended because these bacterial infections are less common and can be treated with antibiotics.)

Although all existing vaccines are apt to reduce the severity of viral infection, none can be guaranteed to immunize all cats against the organisms that cause upper respiratory disease. Also, new viral strains are continually developing and, therefore, the efficacy of a current vaccine may diminish as time goes by. However, says Dr. Rozanski, “Vaccinations may not be 100 percent effective, but they’re pretty good. They definitely help prevent infection in most cats. And if they don’t prevent infection, they make an infection less severe.” — Tom Ewing