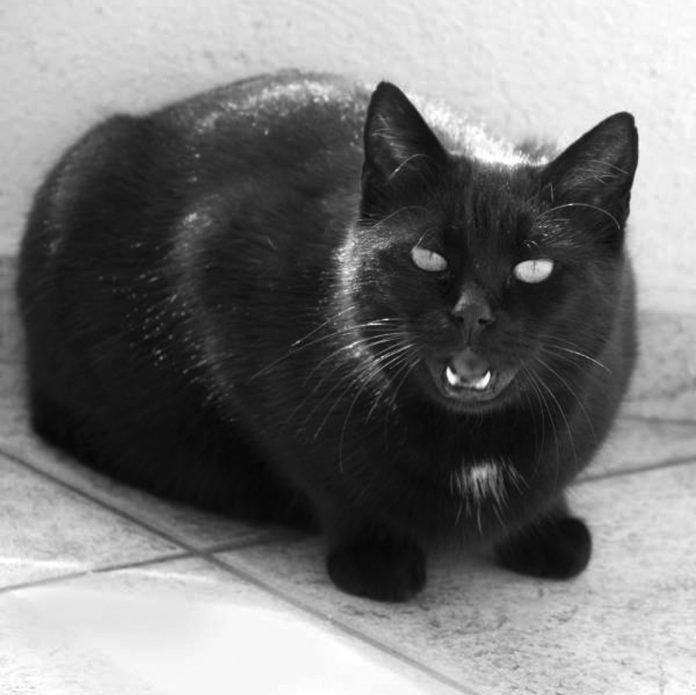 Editor’s note: This is the second of a two-part series looking at managing pain in cats. The first part covered how pain is assessed and featured the Pain Clinic at Tufts University. This second part focuses on pain medications for cats with arthritis.

According to the American Association of Feline Practitioners’ new life-stage guidelines, a 20-year-old cat is approximately equivalent to a 96-year-old person. This would make Brian and Valerie Sciarra’s cat, Odaat, at age 20, nearly a centenarian.

Despite Odaat’s advanced age, he is in remarkably good health, except for mild renal insufficiency and arthritis in his front legs. Arthritis is a well recognized problem in dogs, but is often overlooked or unrecognized in cats for many reasons. Cats with arthritis are less likely than dogs to show true lameness because cats are adept at redistributing weight-bearing to unaffected limbs.

The feline lifestyle is also a factor. When an arthritic dog can no longer jump into the back of the van or has to stop and rest during long walks, it is easily recognized. When a cat can no longer jump onto the windowsill or bed, he merely chooses a new favorite place to sleep or meditate and the owner simply thinks the cat has discovered a novel preferred location. Many cat owners don’t consider that their cat might be suffering from arthritis.

Arthritis common in senior cats
Although arthritis can be present in cats of any age, it is more common in older cats. In one published study, more than 90 percent of cats age 12 years and older had radiographic signs of arthritis. The elbows and hips are the most commonly affected joints. Many cats have multiple affected joints.

Odaat’s problem began when he was around 14 years old. At that time, he showed stiffness in his front legs, especially his elbows and right paw. Although lameness was Odaat’s primary clinical sign, lameness is not a typical clinical sign of arthritis in cats. Cats with arthritis will often show signs such as inappropriate elimination (urinating and/or defecating outside the litter box) because their usually flexible spine becomes stiffer as they develop spinal arthritis, making it difficult to squat in the litter box. Often, the cat will urinate or defecate immediately outside the box instead.

“Odaat would fall when crouching in the litter box,” notes Valerie Sciarra. “His arthritis got so bad at one point that he needed to lean himself against the wall when walking down the hallway, to hold himself upright.”

Decreased grooming, matting of hair or an unkempt coat may be seen because stiffness of the spine can make it difficult to twist the torso properly to groom the rear parts of the body. You may also see reluctance to jump up or down, inability to jump as high as before, sitting down and standing up more slowly than in the past, hiding, becoming annoyed about being combed or groomed and sleeping more. These signs are often incorrectly attributed to simple aging, leading cat owners to delay or avoid seeking veterinary advice.

Treatment of arthritis may involve lifestyle changes and pharmacological and non-pharmacological therapies. Food bowls should be placed in areas that do not require jumping for access, and litter boxes with high sides may need to be replaced with low-sided boxes for easier entry. Steps or ramps can be constructed to allow cats to continue to enjoy their favorite spots.

Obesity contributes to the development and clinical signs of arthritis, therefore, overweight cats should be placed on a diet. Exercise using toys (a laser pointer and other interactive toys) can encourage weight loss and keep joints limber.

Initially, non-pharmacological management was attempted for Odaat. He was prescribed Dasuquin, a nutraceutical whose primary ingredients include glucosamine and chondroitin sulfate. These supplements are believed to slow the progression of cartilage degradation and promote cartilage health by providing the necessary ingredients to repair and maintain cartilage.

For two years, he was comfortable. At age 16, however, Odaat’s arthritis got markedly worse. More potent medication was necessary.

Drug of choice: Meloxicam
The cornerstone of pharmacological management of arthritis has been the use of non-steroidal anti-inflammatory drugs (NSAIDs). Cats, however, often have trouble metabolizing drugs of this class, and some can be toxic. Meloxicam (brand name: Metacam) is currently the only NSAID approved for use in cats in the United States, but the approved form is the injectable form. The oral liquid formulation is approved for use in cats in the European Union, but not in the United States.

Meloxicam appears to be very effective in controlling feline arthritis, however, there is some concern about potential adverse effects, most notably involving the kidneys. With Odaat’s quality of life deteriorating as a result of his arthritis, and with few options available for long-term pain management in cats, the decision was made to administer meloxicam to Odaat.

“Recently, I was moving some delivery boxes, and he jumped into one of the boxes, like a kitten. He realized that the only way out of the box was the way he got in, so he actually sprang off of his rear legs and jumped out!” says Valerie Sciarra.

“He fell afterward, of course,” she says. “But he got right back up and walked off.”

He gets the meloxicam as three drops in his food every other day. On the days he gets the medication, he’s noticeably more spry and able to jump up on the bed. In fact, when he’s stiff, his owner says he won’t eat his food unless the medicine is on it.

Late last year, the U.S. Food and Drug Administration (FDA) required the makers of Metacam to print on the package a warning that states that “Repeated use of meloxicam in cats has been associated with acute renal failure and death. Do not administer additional injectable or oral meloxicam to cats.” Although the number of cats experiencing adverse reactions to meloxicam is small, when given the drug carefully and appropriately, the majority of cats do well and experience no side effects. Clearly, Odaat falls into this category.

Arthritis is an irreversible, progressive disease. Although it cannot be cured, a cat’s quality of life can be improved through medical and non-medical interventions. Arthritis may not be as well documented in cats as it is in dogs, but it is essential that cat owners recognize the clinical signs of the condition, particularly now that cats are enjoying longer life spans.