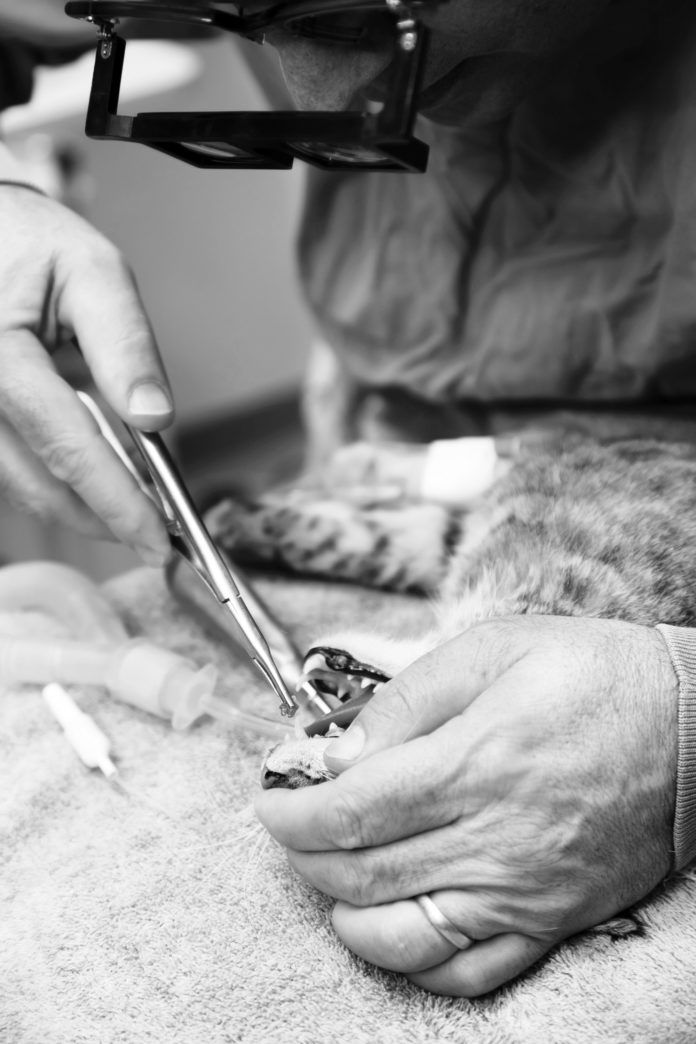 Regardless of breed or gender, all cats have a number of things in common, including their dentition — the number, size, shape, arrangement and function of their teeth. They also share an unfortunate tendency to lose some or all of these teeth over the course of their lives. In some cases, the missing teeth have been knocked out during a traumatic event — the animal has been struck by a car, for example, or has fallen from a tree.

In other cases, a cat’s teeth may drop out as an inevitable consequence of periodontal disease (the most frequently seen among all feline oral disorders), which is most notably characterized by the accumulation and hardening of a bacterial film (plaque) that accumulates on a tooth’s surface.

In most cases, however, a cat’s loss of one, two, or possibly all of her teeth will occur as the result of tooth resorption, the progressive development of destructive lesions on an animal’s teeth and gum tissue. Also referred to as feline odontoclastic resorptive lesions (FORLs), this dental disease is characterized by the gradual erosion of an affected tooth or teeth, most often below the gum line and along the roots. These lesions, whose precise causes are unknown, progress over time and result in irreparable dental damage. An estimated nine out of 10 domestic cats in the U.S. will experience a significant dental problem at some point in their lives, with two-thirds or more of these cats experiencing tooth resorption.

According to veterinary dental specialist William Rosenblad, DVM, a Tufts graduate who is chief of dentistry, oral medicine, and surgery at Angell Animal Medical Center in Boston, “Extraction is the only treatment for tooth resorption that we’ve come up with to date. It’s the only way we can remove the source of pain and infection.”

“We’re not doing our cats any favors by leaving diseased teeth in place,” says Dr. Rosenblad. “In fact, an extraction — whether it involves two teeth or 20 teeth — is usually more of a psychological stressor for an owner than it is for the patient. But when the procedure is over, the owner is apt to say ‘She’s like a new cat!'” After a diseased tooth is pulled, he points out, a cat is likely to be friendlier, have a better appetite, groom herself more enthusiastically and be more active.

The duration of a dental extraction procedure, Dr. Rosenblad says, depends on several factors: the number of teeth involved, which teeth, the length of time that the causative disease has been present and the extent to which it has progressed. He describes a typical procedure as follows: “We first put the cat under general anesthesia, conduct a complete oral exam, and take X-rays. We will then use a local anesthetic in the area that needs attention. And in most cases, we’ll also give the patient antibiotics intravenously during the course of the procedure. Then, depending on which tooth we’re working on, we most often lift up the gum line a little bit and take a small piece of bone from around the outside of the tooth. This makes it easier to remove the tooth — sideways rather than straight out. If multi-rooted teeth are involved, which is usually the case with teeth in the rear of the mouth, we separate the roots, so that we can remove them individually, one root at a time. We then smooth off any rough edges of bone, make sure that we see a nice blood clot forming, and close the incisions with dissolvable sutures.”

If only one tooth is involved, says Dr. Rosenblad, the procedure will typically take a half-hour or 45 minutes. “But if it’s a full-mouth extraction,” he notes, “the procedure can take three hours or more, especially if the teeth are severely damaged or the gum tissue is in really bad shape.”

Shortly after the extraction procedure has been completed, the patient will awaken and be ready to be taken home. “There’s usually very little bleeding or none at all,” says Dr. Rosenblad, “and the cat is typically a lot healthier overall than she was before the procedure. She won’t need antibiotics during her recovery unless there are other health issues involved — if the animal is being treated with chemotherapy, for example, or if she has kidney or heart disease.”

In most cases, full recovery is speedy. “The cat may be very quiet for a day or two, catching up on her sleep and trying to get over the stress of the dental procedure,” says Dr. Rosenblad. “A day in the hospital is never a good day for a cat. But after a day or two, she should be back to normal.” Dr. Rosenblad uses only dissolvable stitches, he adds, which will disappear entirely within two to four weeks.

As for feeding the recovering patient, Dr. Rosenblad says: “Most cats will be able to get back to their routine food as soon as they return home. And we’re not too concerned about the animal’s water intake, since she was on intravenous fluids during the entire procedure. Chewing might cause pain in the sutured areas, so we might suggest canned food or softened dry food for a week or so.”

And for cats who have had all of their teeth extracted, he adds: “They do great! When the gum tissue is healed, it’s very tough stuff. They might not chew as efficiently as do cats with a complete set of healthy teeth, but they certainly chew better with fewer or no teeth than they do with any number of diseased teeth.”

Depending on the extent of the surgery, he adds, tooth brushing in the sensitive areas of the cat’s mouth should be avoided during the healing process. “So we’ll often recommend the use of an antiseptic mouth rinse during the first week or two of healing,” he says. All cats who have had dental extractions should undergo a follow-up veterinary examination two weeks or so after the procedure, he advises.

The cost of a feline dental extraction procedure will vary according to several factors. Says Dr. Rosenblad: “Including the initial examination, X-rays, anesthesia, and post-op monitoring of the patient, a procedure for a single extraction will probably cost several hundred dollars. But if the treatment lasts two or three hours and involves many teeth, the cost can certainly go up into the $1,500 to $2,000 range.”