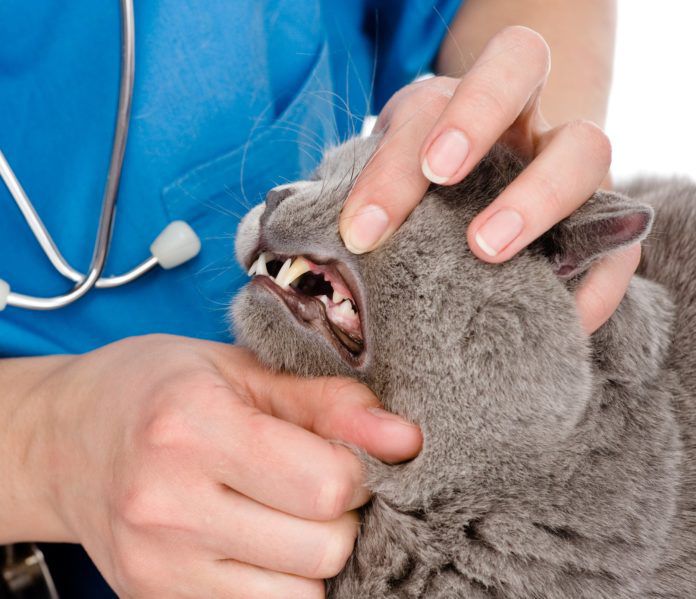 Inflamed and swollen gums, bad breath, a decline in appetite, noticeable weight loss — these are among the most common indications that your cat is suffering from a disorder centered in her oral cavity, most likely in her teeth and gums. She may not behave as if she’s in pain, but that’s because cats are very good at concealing health issues; after all, she doesn’t want to signal to a potential predator that she’s in a weakened condition and therefore vulnerable to attack.

However, you can presume that — if affected with significant dental disease — your cat will be experiencing considerable discomfort because the sensory nerves that cause humans to experience dental pain are also present in cats.

Unfortunately, feline dental disorders are extremely common. Indeed, an estimated 90 percent of all domestic cats will experience some type of dental disease during their lives. “Dental problems are the most common disorders that we see in cats,” says William Rosenblad, DVM, a Tufts graduate and specialist in dentistry.

Born toothless, cats grow two sets of teeth during their lifetimes. The first set comprises 26 deciduous teeth, otherwise known as milk teeth. They start to appear when a kitten is about four weeks old, and by six weeks of age or so, the full complement is present.

By the time the kitten is about six months old, the deciduous teeth will have fallen out and been replaced by 30 permanent teeth — 16 upper and 14 lower. Collectively, the permanent teeth are shaped and arranged in the mouth to accommodate a cat’s naturally carnivorous habit — catching and eating small prey.

Four types of teeth reside in a cat’s mouth: incisors, canines, premolars and molars. Each type is distinct in shape and size according to its principal predatory function. The incisors, located at the front of the mouth (six upper and six lower) perform the nipping function. Next in line are the canines (two upper and two lower), which are well suited for grasping and puncturing.

Inside each tooth is a chamber containing a soft tissue that is made up of blood vessels, lymphatic vessels and nerves. This tissue is surrounded by a bone-like substance, called dentin, which accounts for the bulk of a tooth’s structure.

And covering the crown of the tooth (its exterior surface outside the gumline) is a layer of enamel, which protects the dentin. All of the tissues that constitute a cat’s teeth are vulnerable to disease, injury, and routine wear and tear.

According to Dr. Rosenblad, two categories of feline dental disease account for the vast majority of serious conditions affecting the teeth and/or the supporting tissues around the teeth. Most commonly diagnosed is periodontal disease, which is believed to affect more than 80 percent of domestic cats. In this disease, layers of plaque — accumulations of bacterial microorganisms — harden on a tooth’s surface.

Bacterial poisons and enzymes from the plaque eventually prompt an inflammatory response in the gums (gingiva) that, if untreated, will lead to severe gum inflammation (gingivitis). In cats, advanced periodontal disease can quickly progress to an end-stage condition for which extraction is the only reasonable treatment option.

The other comparatively common dental disorder in cats is feline odontoclastic resorptive lesions (FORLs), which is estimated to affect at least 60 percent of domestic cats, according to Dr. Rosenblad. This disease is characterized by plaque-caused lesions that originate in the dentin — a tooth’s hard tissue — and can progress rapidly, potentially causing irreparable damage to a tooth and its root.

To determine the source of a cat’s dental problems, a veterinarian will place the animal under general anesthesia and, if necessary, take X-rays. The cat will be anesthetized for as long as it takes the veterinarian to clean her teeth, do the examination and perform treatment as needed.

Treatment will vary, says Dr. Rosenblad, depending on which disorder is diagnosed. “At present,” he says, “extraction is the only treatment for advanced resorptive lesions. (Such a procedure, he notes, will typically take about 45 minutes to an hour.) But for periodontal disease, if it’s not too advanced, we’ll do scaling and polishing. After that, we’ll have to tell the cats’ owner how to go into prevention mode, which relies primarily on a proper diet and daily brushing.”

According to Dr. Rosenblad, some cats might have a specific health problem requiring their being fed specially constituted canned food. For the great majority of cats, however, dental health is likely to benefit significantly from a diet of hard food or, at least, by a diet of canned food that is routinely supplemented with a generous amount of hard food.

“Because of a cat’s dental anatomy, a diet of hard food and crunchy treats, along with a ready supply of water, is definitely helpful,” says Dr. Rosenblad. “Dry food is effective because it needs to be chewed, and the chewing results in increased saliva release. The saliva rinses the mouth and also has some antibacterial value.”

In addition to being fed a diet of hard food, a cat’s dental health requires daily tooth brushing. “What you want to do is to concentrate on brushing the outer side of the upper and lower teeth,” says Dr. Rosenblad. “The goal is to remove the plaque, which can build up and harden into tartar — or calculus — within 24 to 36 hours or so. To do a good job of brushing shouldn’t require more than a minute or so.”

Use a finger brush designed for pets or a soft-bristled toothbrush that is about “the size of your little finger,” he advises. And be sure to use a tooth paste that is specially formulated for cats.

“The brushing should be done with the cat’s mouth gently held closed,” says Dr. Rosenblad. “Try to sneak the toothbrush in between the cat’s lips and into the cheek, right on the outside of the upper teeth. Circle the brush around for a few seconds, and then do the same on the other side of the mouth. That’s about it.”

Dr. Rosenblad recommends that thorough oral exams be done beginning when a kitten is two months old or so, again at the age of six months or a year, and annually thereafter. “You want to make sure during the first appointment that all of the kitten’s baby teeth are there and healthy. You don’t need to have to have X-rays taken. You just want the veterinarian to lift the animal’s lip to see that what teeth should be there are there.”

A qualified veterinarian will be experienced in performing detailed investigations of a patient’s teeth above and below the gumline, in taking appropriate X-rays when they are needed, and in the thorough cleaning, scaling and polishing of a patient’s teeth.

If a veterinarian is not experienced in performing any necessary tooth extractions, referral to another practitioner should be pursued. — Tom Ewing