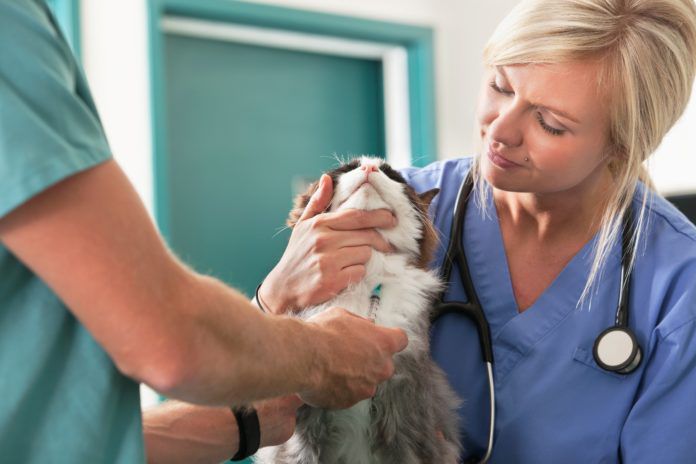 The average cat has about two ounces of blood coursing through her arteries, veins and capillaries for every two pounds of body weight. Like human blood, feline blood is a blend of red cells (erythrocytes); white cells (leukocytes); tiny disk-shaped bodies called platelets; and a colorless fluid (plasma) in which these components and other life-supporting ingredients — such as hormones, proteins and salts — are suspended.

The primary function of this normally rich, red fluid is to transport oxygen and nutrients to the tissues throughout a cat’s body and to carry carbon dioxide and wastes away from those tissues. In addition, however, circulating blood in cats as well as in humans plays an indispensable role in such life-sustaining processes as cell development, tissue repair and the warding off of infection.

Why evaluation is important
Considering the various roles performed by this life-sustaining fluid, few veterinarians would dispute the wisdom of having your cat’s blood periodically evaluated to make sure that all of its components are present and that it is functioning properly. Veterinarians generally agree that young and apparently healthy cats do not need to have their blood routinely tested.

However, says Elizabeth Rozanski, DVM, associate professor of emergency and critical care in the department of clinical sciences at Tufts, “When a cat reaches middle age — seven or eight years old — it’s a good idea to have a baseline test done. After that, it depends to an extent on how the cat is feeling.”

Yearly for the aging cat
Nevertheless, most veterinarians agree that an annual test should be considered for all elderly cats — those older than 10 or 11 years of age — and for any cat who is about to be anesthetized for surgery of any kind. (“For example, a 12-year-old cat with significant dental disease is a cat that should absolutely have a blood test done before surgery,” notes Dr. Rozanski.)

A thorough blood evaluation is also advisable for a kitten who will be receiving her first vaccination series, as well for any cat showing such signs of illness as fever, weight loss, vomiting, diarrhea, increased thirst or unusually frequent urination.

A blood test entails the withdrawal of a half-teaspoon or so of an animal’s blood, usually from one of the two jugular veins, which run down the underside of a cat’s neck, or from a vein in one of her legs. “Taking the blood doesn’t hurt a cat very much, although it may be uncomfortable,” says Dr. Rozanski. “Some cats will wiggle a lot; others will just sit there quietly. It depends on their personalities.”

The test that is most commonly done evaluates the blood sample in two separate processes: a complete blood count (CBC) and a blood chemistry panel. According to Dr. Rozanski, this component of a blood test can reveal a wide array of disorders. “Leukemia, anemia, the presence of red blood parasites — we can detect all of that with a CBC,” she notes.

What the CBC will show
The CBC (also known as a hemogram) includes the following measurements and evaluations:

The role of chemistry panels
The other blood test component — the chemistry panel — focuses on the chemicals that are suspended in the clear, watery content (serum) of the blood after it has been separated from the blood cells and clotting proteins.

In these tests, the presence of a dozen or more substances — including blood urea nitrogen (BUN) and creatinine, chemicals that are normally found in excreted urine — are measured. The chemistry panel is valuable in assessing a wide range of health-determining factors.

For example, it can reveal problems in an animal’s organ function and can determine whether the blood is appropriately stocked with electrolytes — chemical compounds that regulate the exchange of electrical charges across cell membranes.

Abnormally low or high blood levels of various substances may indicate damage or disease involving the kidneys, liver, muscles or glands. For example:

An abundance of information
The value of basic bloodwork is indisputable and — along with patient history, a thorough physical exam and urinalysis — is well established as a fundamental element of modern veterinary practice. Most veterinarians, therefore, will start the evaluation of any sick cat with the basic screen because the procedure is noninvasive and provides an abundance of information.

In some cases, a routine CBC or blood chemistry panel may be inadequate for a specific purpose, such as looking for infection in a specific organ, gauging an animal’s endocrine function, or testing for systemic infection with FIV (feline immunodeficiency virus), FeLV (feline leukemia virus) and other specific disease agents.

These and other such specialized tests may require a cat’s blood sample to be shipped to a specialized lab, in which case the results may not come back for days or weeks, while the findings of a routine CBC or blood chemistry panel can be available almost immediately. According to Dr. Rozanski, a routine blood test will typically cost between $100 and $150, although this price may vary regionally. — Tom Ewing