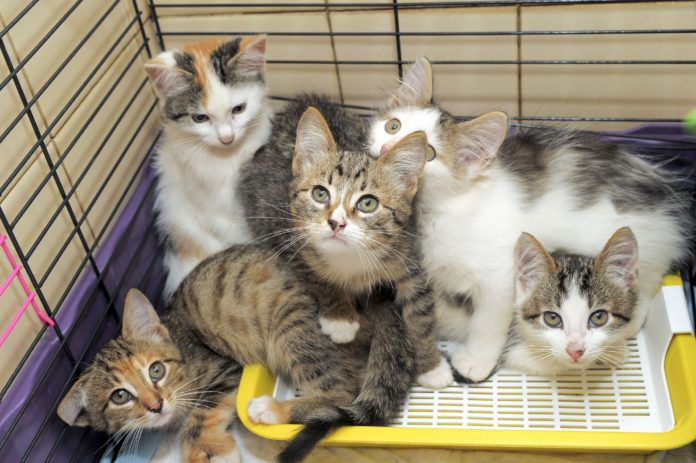 Vomiting, severe diarrhea, diminished appetite, fever, listlessness, progressive weight loss and general weakness are among the signs of a deadly feline illness called parvovirus. This potentially fatal disorder — also known as panleukopenia or distemper — is an illness for which there is no specific treatment. Fortunately, a highly effective vaccine is available to provide cats with long-lasting immunity against the feline parvovirus (FPV) — the organism that is responsible for spreading the disease.

Due to panleukopenia’s deadly potential, the American Association of Feline Practitioners regards the vaccine that protects cats against FPV as a “core vaccine” — one with which all kittens should be vaccinated in a series of shots beginning when they are six weeks old.

Fortunately, according to Elizabeth Rozanski, DVM, panleukopenia is “not very common” these days. “It used to kill a tremendous number of cats,” says Dr. Rozanski, an associate professor of emergency and critical care in the department of clinical science at Tufts. “But the vaccine that is available now to protect against it is very, very good, and we only see panleukopenia in cats that have never been vaccinated or have been vaccinated very recently — within the past two weeks or so.”

In addition to its comparatively small size, the parvovirus that causes panleukopenia has the distinctive characteristic of primarily infecting very young cats who have not been given the vaccine. Indeed, it is estimated that more than 90 percent of cats diagnosed with panleukopenia are kittens, most of them between two and four months of age. In fact, the disease is now extremely rare in older cats living in areas where the vaccine is readily available.

The parvovirus does its damage by attacking and destroying blood cells, especially white cells. (The term panleukopenia is derived from Greek words that essentially mean “a general lack of white blood cells.”)

The disorder can manifest itself in the gastrointestinal tract, where the cells that line the intestines are attacked; in the circulatory and lymphatic systems, where the destruction of white cells can seriously impair the immune system; or — in feline fetuses or newborn kittens — the nervous system, where the disease affects brain cells in the cerebellum.

“Some patients will be able to pull through, if they aren’t super-infected,” says Dr. Rozanski. “Within a week or so, their white cell count will rebound and the clinical signs of panleukopenia will go away. But most cats with the disorder are likely to die of dehydration or sepsis if they remain untreated.”

A problem in crowded areas

While panleukopenia may be present anywhere in the environment, the disease is especially threatening in such places as crowded animal shelters and breeding facilities where unvaccinated kittens may be carrying the causative parvovirus. In close quarters, the parvovirus is spread from one cat to another via fecal-oral ingestion.

The initial signs of infection vary. An affected kitten may, for example, appear to be just a bit ill or may have a touch of diarrhea but will soon recover uneventfully, thanks either to her innate immune system — the one she was born with — or to her adaptive immune system, passed to her during nursing, which produces appropriate antibodies.

But in a significant percentage of infected animals, the disease and its clinical signs will develop very rapidly. “These signs include lethargy, not eating, really bad vomiting and diarrhea, and severe dehydration,” says Dr. Rozanski. “The signs usually appear within four to seven days following infection — sometimes sooner, sometimes later than that.”

Sadly, many kittens that develop FPV infection and do not receive immediate supportive care will die as the result of the infection and its effects within a day or two. However, a kitten that survives for 48 hours after the emergence of the clinical signs has a fairly good chance of full recovery. And if it survives for five to seven days, the kitten will probably recover, given that she receives timely and proper veterinary attention.

To diagnose suspected panleukopenia, according to Dr. Rozanski, a veterinarian will routinely review a cat’s medical history and vaccination status, do a complete blood count and blood chemistry panel, and order a fecal examination. In some instances, laboratory tests might be done to confirm the presence of FPV and to rule out other serious viral diseases, such as those caused by the feline leukemia and feline immunodeficiency viruses.

Since there is no specific treatment for a panleukopenia infection, treatment will be basically supportive — a matter of keeping an affected animal warm and hydrated. When delivering fluid intravenously into the animal’s system and providing her with injectible nutritional support, special care must be taken to protect her from secondary bacterial infections.

Drugs to control vomiting may be advisable, and transfusions may be required if an affected cat is very anemic. For a cat that survives the ordeal, subsequent home care will entail feeding her a bland diet at first and reintroducing her normal diet gradually. If a cat survives the disease, she should be immune for life.

In their earliest weeks of life, kittens may be protected against FPV infection and panleukopenia by immunity that has been passed along to them by their mothers (if, of course, the mother has been vaccinated). However, that immunity will only last until a kitten reaches the age of six or eight weeks — at which time her owner should be sure to have the animal vaccinated against FPV according to a schedule that will entail periodic revaccinations.

Once a deadly threat

In the distant past — the 18th and 19th centuries — outbreaks of panleukopenia nearly wiped out certain feline populations. Indeed, until effective vaccines for the disease were created in the late 1960s, more than half of all cats in shelters developed panleukopenia, with an estimated 25 percent to 50 percent of those animals dying of the disease. Currently the American Association of Feline Practitioners strongly recommends that all kittens be initially vaccinated at six weeks of age and subsequently receive booster shots every three to four weeks after that until they are about 12 weeks old.

To safeguard a cat’s health over time, most current protocols call for revaccination every three years, which is adequate to protect an animal from getting this disease. The efficacy of this vaccination regimen, Dr. Rozanski points out, “is close to 100 percent. We don’t want to over-vaccinate, but panleukopenia is a devastating disease, and we don’t want to lose an animal to it when it’s so preventable.”

Owners are also advised that good hygiene practices can help to limit the spread of the virus in areas and climates in which it is known to thrive. This can be achieved by routinely using a bleach solution to deactivate the virus on surfaces in the cat’s environment — including a cat’s eating bowls and litter box — that may have been somehow contaminated by the virus. — Tom Ewing