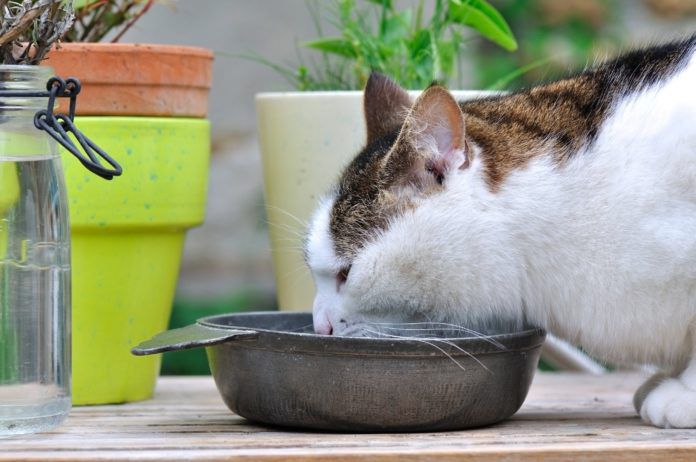 Diabetes mellitus is a frequently diagnosed disease of the feline pancreas, a relatively small, thin organ nestled in the front portion of a cat’s abdomen.

The pancreas plays two vital roles — exocrine and endocrine. In carrying out its exocrine function, a healthy pancreas generates a variety of enzymes that enable the digestion of nutrients in the intestinal tract. In performing its endocrine function, the pancreas manufactures the hormone insulin, which helps a sugar called glucose (also referred to as “blood sugar”) to enter the cells of the body. Glucose is a crucially necessary chemical compound that is the source of the energy needed to sustain an animal’s life.

In diabetes mellitus, the endocrine function is impaired and a cat’s pancreas is unable to produce sufficient insulin, which consequently diminishes a cat’s ability to utilize glucose. (Diabetes mellitus is not the same as diabetes insipidus, a far less common disease characterized by persistent thirst and excessive urine production.)

According to Michael Stone, DVM, a specialist in internal medicine at Tufts, “The earliest warning signs of feline diabetes mellitus include increased thirst — polydipsia — and increased urination — polyuria, along with excessive appetite and weight loss. These four signs, which generally occur in combination, are the hallmarks of diabetes mellitus.” However, some patients seem to skip past the early warning signs and head straight toward diabetic ketoacidosis, an advanced stage of diabetes mellitus marked by lethargy, vomiting and loss of appetite. “In such a case,” notes Dr. Stone, “we wonder if the pets owners simply missed the early warning signs of diabetes. Or has the cat moved directly into the disorder’s ketoacidotic stage?”

Diabetes mellitus results from an insufficient production of insulin by the pancreas. There are two kinds of diabetes — Type I and Type II.

In Type I diabetes, the body produces little or no insulin due to an insufficient number of cells capable of producing the hormone. Treatment for the condition entails daily injections of the hormone. “The condition is irreversible, and insulin administration will be required for the rest of an affected animal’s life,” explains Dr. Stone.

In Type II diabetes, the pancreas may produce insulin but the body’s cells have difficulty making efficient use of it — a phenomenon called insulin resistance, the most common cause of which is obesity. Many cats diagnosed with diabetes mellitus are thought to have Type II; it is estimated that as many as one half of them may go into remission. That is, an affected cat will experience periods during which insulin therapy is not necessary.

In general, a combination of gradual weight loss, polydipsia and polyuria suggests the presence of diabetes. Cats of both genders are susceptible to diabetes, although some studies have suggested that males are more commonly affected than females. Obese cats are at elevated risk, and while diabetes can occur in cats of any breed, studies indicate that Burmese cats are especially predisposed.

And although diabetes can affect cats of any age, older cats — those over age 10 or so — are most susceptible. A cat’s lifestyle may also increase susceptibility to diabetes, because inactive indoor cats are more prone to obesity than those who spend most or all of their time outdoors.

Owners who notice the signs of diabetes in their cats should seek veterinary care as soon as possible because severe complications may emerge if the condition is allowed to progress. One such complication is peripheral neuropathy, which results from diabetes-related nerve damage affecting an animal’s feet and legs. A cat with this condition is likely to show signs of weakness in her limbs, may drag her backside low to the ground and may eventually be unable to stand on all fours.

A more perilous condition is diabetic ketoacidosis, which is caused by excessively high levels of blood sugar and the consequent buildup of certain acids in the blood. Signs of this condition include vomiting, loss of appetite and lethargy. Without the prompt infusion of fluids and insulin, an animal with this condition could die.

When diabetes is suspected, veterinary examination will aim to confirm the diagnosis and rule out other possible causes for the typical clinical signs. The diagnostic procedure will involve a thorough medical history and physical exam; a urinalysis to check for the presence of glucose and ketones in the urine; a search for signs of possible urinary infection; blood tests to determine the concentration of blood glucose; and various procedures to exclude other possible conditions, such as hyperthyroidism. In some cases, abdominal X-rays or ultrasound imaging will be done to evaluate the health of the pancreas and other internal organs.

Treatment for a confirmed case of feline diabetes will rely largely on dietary therapy aimed toward maintaining a cat’s proper weight and minimizing the consumption of food that might increase blood glucose levels. “The treatment of diabetic cats who don’t eat is complicated,” says Dr. Stone. “It requires frequent monitoring of their blood sugar, so hospitalization is often recommended. But home monitoring can bring costs down significantly, and as long as the patient is eating, home care is appropriate.”

The same can be said of insulin injections: Most diabetic cats will require injections of insulin, administered twice a day — and owners can be taught how to properly administer an injection by a veterinarian or veterinary technician. “Although it may sound scary, administration of insulin is very easy — easier than giving a pill — and is completely painless for a cat. The needle is very thin, and most cats won’t even react to the injection at all. In most cases the insulin will be administered twice daily, and we recommend that the cat be fed at the same time.” Regarding diet, “Most veterinarians believe that a low-carbohydrate, high-protein regimen is most appropriate for diabetic cats,” says Dr. Stone.

A cat undergoing prompt treatment will typically begin to show improvement within a few days. It is estimated that between 10 percent and 50 percent of affected cats will do well enough to eventually stop receiving insulin shots, although they will be predisposed to relapse and must be carefully monitored for the rest of their lives. Overall, notes Dr. Stone, “With proper home care, most diabetic cats can live long and happy lives.”— Tom Ewing