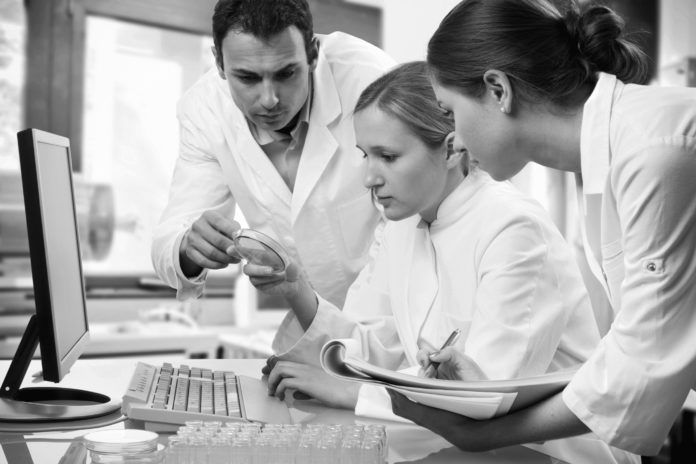 Lymphoma is the most common malignancy in cats, accounting for approximately 33 percent of all diagnosed cancers in cats. Diagnosis is usually achieved either via cytology, in which a needle is inserted into the affected tumor or lymph node and cells are removed and evaluated on a microscope slide; or via biopsy, in which a small piece of the tumor or lymph node is removed and then examined by a pathologist.

Lymphoma is Hard to Diagnose in Cats

In some instances, however, a diagnosis can remain elusive. For example, some cytology samples end up being non-diagnostic; the cytologist may indicate that the cells look suspicious for — but cannot be conclusively identified — as lymphoma, and that a biopsy specimen is needed to be certain. In some cats, obtaining a biopsy specimen can be problematic, since procuring one requires anesthesia, which may entail unacceptable risk if the cat is in frail health or has a cardiac condition that precludes anesthesia. Performing a surgical biopsy can be expensive, and may be cost-prohibitive for some cat owners.

Here is a common, real-life scenario that veterinarians frequently encounter. A cat owner is concerned that his or her middle-aged to older cat has been losing weight for the past few weeks. A physical examination is performed, which unfortunately fails to reveal the cause of the weight loss. The cat owner is informed that the top three common metabolic causes for weight loss are diabetes, hyperthyroidism and chronic kidney disease — and that a few basic blood and urine tests should be able to determine whether the cat is afflicted with any of these three conditions.

The test results come back normal. At this point, the most likely cause of the weight loss is some type of gastrointestinal disorder. Usually, an abdominal ultrasound will be recommended to assess the gastrointestinal tract for abnormalities. The ultrasound reveals that the intestinal walls are thicker than normal. This suggests that there is some kind of cellular infiltration going on in the walls of the intestines.

If the cells that are infiltrating the intestine turn out to be inflammatory cells, the diagnosis is inflammatory bowel disease (IBD). If the cells are cancerous lymphocytes, the diagnosis is lymphoma. The only way to distinguish between these two conditions is to biopsy the intestinal tract. Cat owners are told that the veterinarian can perform a biopsy in two ways — either by exploratory surgery or by endoscopy. Both procedures are costly and require anesthesia.

Invariably, the client will ask, “Can’t you tell if it’s cancer from the blood tests you ran?” Previously, the veterinarian’s answer to this question has always been no. However, a new blood test on the horizon may change that answer to “yes” very soon.

When cells divide, they produce DNA. Thymidine kinase (TK) is an enzyme that plays a role in the synthesis of DNA. Cells that are rapidly dividing produce lots of DNA, and will therefore have high TK activity. Cancer cells divide more rapidly than normal cells, and this proliferation is especially prominent in lymphoma. Measurement of serum TK levels has been shown to be useful in human oncology and in canine oncology. Except for a small pilot study in 2008 which indicated the potential for TK to be a useful test, no large study had been done to truly assess this enzyme in cats.

A recent study in the Journal of Feline Medicine and Surgery (February 2013), however, further characterizes this exciting new test in cats. The study evaluated samples from 49 healthy cats, 33 cats with lymphoma, 55 cats with inflammatory diseases and 34 cats with cancer other than lymphoma. Cats with lymphoma had significantly higher levels of TK in their serum than those in the other three groups.

A closer look at the data, however, reveals some limitations of the test. Although the mean serum TK level was much higher in cats with lymphoma, there was wide variation within each group, and a fair amount of overlap was noted between groups. A significant number of cats with lymphoma (60 percent) did not have elevated serum TK levels. In addition, eight cats with inflammatory disease (including the five cats with pancreatitis) had TK levels above the reference range (i.e. they were in the lymphoma range). The fact that many cats with lymphoma had TK levels within the normal range means the test has low sensitivity: it will call a cat “normal” even though the cat truly has lymphoma.

The test has high specificity, however. In other words, if the serum TK level is high, it is very likely (94 percent probability) that the cat has lymphoma. Yet another way of saying this is: A normal TK level doesn’t mean that the cat does not have lymphoma; it still might. However, a high TK level means the cat almost certainly has lymphoma. For any test, the ideal scenario would be for the test to have 100 percent sensitivity and 100 percent specificity, meaning that a cat that tests “normal” definitely doesn’t have the disease, and a cat that tests “high” definitely does. Unfortunately, no test is 100 percent sensitive and 100 percent specific, and that includes the serum TK test.

The fact that a fair proportion of cats with lymphoma will be missed using the serum TK test illustrates that biomarkers like TK should not be relied upon as the sole test for diagnosing lymphoma, but rather should be used as just one tool to confirm the diagnosis. Perhaps a more practical application would be the use of TK as a marker for monitoring the response to chemotherapy.

Referring back to the cat with unexplained weight loss in the scenario described earlier, let’s say that endoscopy was performed, biopsies were obtained and a diagnosis of lymphoma was confirmed. Once chemotherapy is started, how can we be certain that the cat has responded to the chemotherapy and has gone into remission? Certainly, regaining of most of the weight that was lost suggests a good response to the chemo.

One way to determine the effectiveness of the chemotherapy would be to perform endoscopy again, obtain new biopsies, and compare these to the original samples, to look for the presence of lymphoma cells. This is impractical, owing to the risks of anesthesia, and the invasiveness and cost of the procedure. If, however, the cat had high serum TK levels at the time of diagnosis, a dramatic drop in the serum TK level would be expected if the cancer was responding to the chemotherapy. In humans, close monitoring of the levels of TK allows for early detection of relapse. Perhaps the same holds true for cats. Further studies are necessary to determine this.

If the serum TK test lives up to its potential, our ability to achieve a diagnosis, monitor the response to chemotherapy, and predict the outcome of treatment will improve markedly, allowing for increased survival time for cats afflicted with this common malignancy.