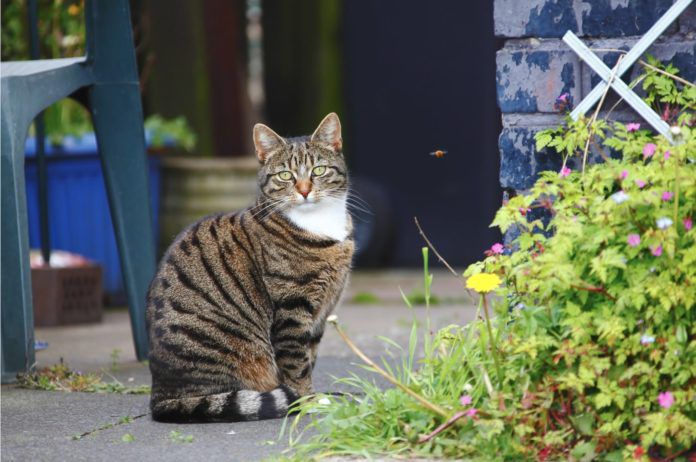 Spring and summer are on the way, and a lot of people are rejoicing. The weather may be extremely enjoyable for many of us — but it can be miserable for cats because warm and humid weather is paradise for fleas. The truth is that few creatures have had as much impact on world history as the common flea. From the black plague during the 14th century to the present, fleas have been the cause of much grief.

To better understand how fleas torment cats and humans — and how best to combat them — it is important to understand the life cycle of the flea. Once a flea jumps on a cat, it stays there for its entire life. Contrary to popular belief, fleas do not jump from one cat to another. Although the flea spends its entire life on the cat, the majority of the flea’s life cycle occurs while off the cat.

When a female flea hops on a cat, it begins feeding on blood within minutes. Ingestion of blood is required for the flea to be fertile and reproduce. Approximately 24 hours later, the flea begins to lay eggs — about 40-50 per day! As the cat moves around the house, it acts like a living saltshaker, disbursing the flea eggs in the environment, mainly in the areas where the cat sleeps or rests.

Within a week, larvae hatch from flea eggs. The larvae try to avoid light and burrow into carpets, cracks in hardwood floors, and other humid areas such as concrete floors in damp basements.

Five to twelve days after that, larvae spin a cocoon in which they develop into pupae. One to three weeks later, baby fleas emerge from pupae. These newly-hatched fleas wait for the cat to pass by, and then they hop on, and the life cycle starts all over again. The entire flea life cycle takes a mere three to six weeks. And if you were to assess all of the life stages of the flea as a population, adult fleas comprise only about five per cent. Eggs make up 50 percent of the population, with larvae at 35 percent and pupae at 10 percent. In other words, if you’re seeing adult fleas on your cat, you can be sure that there is a veritable flea factory looming nearby.

Indoor Cats Are At Risk, Too

And even if a cat spends its entire life indoors, she is not immune from these pesky critters. Fleas are hitchhikers — they can jump onto your clothing, and when you unknowingly bring them back home, they hop onto your cat.

At best, fleas can make your cat itchy and uncomfortable. At worst, they can transmit dangerous diseases. While dogs usually bite or scratch at fleas, cats use their barbed tongues to remove them — often abrading the skin in the process. The most prevalent skin disorder in small animals is flea allergic dermatitis (FAD). This is more than just a mechanical irritation from the flea. When fleas bite the cat, they deposit their saliva into the skin before ingesting blood. Proteins in the flea saliva can induce a hypersensitivity reaction in some cats. This allergic reaction causes severe itching, and cats often develop small crusty papules and hair loss on their neck and face, and most notably down their back, in the classic “racing stripe” pattern.

Fleas are also responsible for transmitting tapeworms to cats. Heavily parasitized cats — especially kittens — can develop anemia due to blood loss from flea bites. Fleas also transmit Bartonella, the organism responsible for cat-scratch disease in humans (see related article on page 12 of this issue). Luckily, most cases of cat-scratch disease are self-limiting, but Bartonella infections can cause very serious illnesses in people with immune deficiency disorders. Fleas can also pass Bartonella from one cat to another. Most cats infected with Bartonella are clinically normal, but infection in cats can sometimes lead to fever, lethargy, lymph node enlargement, eye inflammation and other disorders.

Because some of the infectious agents transmitted by fleas may affect humans, the American Association of Feline Practitioners recommends year-round flea control. Historically, the most effective approach was the three-step method: treatment of the yard, home and cat. The newer flea and tick control products, however, are so effective that treatment of the premises is rarely necessary, especially if the cat resides totally indoors.

Flea sprays, flea dips and flea shampoos have become obsolete. Flea control is now achieved through the use of products that are either given orally or topically once a month. Some of these products are effective not only against fleas, but other parasites as well, including ticks, heartworms, ear mites, hookworms and roundworms.

A variety of flea control products are available to cat owners. Common products include those that contain imidacloprid (Advantage), fipronil (Frontline), dinotefuran (Vectra), spinetoram (Cheristin) or selamectin (Revolution). These products are applied to the skin on the back of the neck. They sink into, and then spread through, the layer of fat beneath the skin, killing any adult fleas that are present on the cat. The advantage of these products is their residual activity; they continue to kill fleas for at least thirty days.

After 30 days, a new dose is applied. These products are very safe, and very effective. Oral flea control products are also available. Nitenpyram (Capstar) is an oral medication that is good for heavy flea infestation. A single oral dose of nitenpyram will kill all of the adult fleas on a cat, starting to work within 30 minutes of administration. However, Nitempyram has no residual effect, so if the cat gets re-infested with fleas, an additional dose may be required. Nitenpyram can also be used together with other flea products.

Spinosad (Comfortis) is an oral formulation that kills 100 percent of adult fleas on a cat by 24 hours after administration. Spinosad has residual effect; it continues to kill adult fleas for 30 days before the next oral dose is required. Lufenuron (Program) is an insect growth regulator — a product that works by interfering with the growth and development of fleas, but has no effect on adult fleas. It is given orally once a month, however, an injectable form is available that is effective for six months.

When a female flea ingests blood from a cat treated with lufenuron, the eggs she produces will be infertile. Because lufenuron does not kill adult fleas, it is better suited to prevent a continual flea problem. It does not stop a flea from biting, so it is not ideal for cats with flea allergic dermatitis. If quicker results are needed, a product that kills adult fleas should be used.

For cat owners who prefer to use flea collars, there is a collar (Seresto) that contains a sustained release formulation of the flea-killing compound imidacloprid, in combination with flumethrin, which kills ticks. The collar kills fleas and ticks for eight months, reducing the need for monthly application of topical products. The collar also has a “break-away” mechanism, so if it gets caught on something, it will release and not cause injury to the cat.

Cat owners should be aware that in an effort to tap into the lucrative flea-control market, some manufacturers have produced flea control products with packaging similar to the veterinary products, i.e. in small, single dose tubes for topical application. These products contain permethrin, an insecticide commonly found in low concentrations in a variety of canine and feline flea sprays and shampoos.

In low concentrations, cats tolerate these products with minimal adverse effects. These small single-dose tubes, however, usually contain concentrated permethrin (45 percent to 65 percent) as the active ingredient. Concentrated permethrin spot-on products are labeled for use in dogs only, and may cause severe and often fatal toxicosis if applied to cats.

Fully understanding the flea life cycle is critical in formulating a comprehensive flea-and-tick control strategy. Talk to your veterinarian about which products are right for your specific pet and her lifestyle because different products offer different benefits. Be aware, however, that improper use of these products can result in treatment failure, and use of unsuitable or mislabeled products can have dire health consequences.