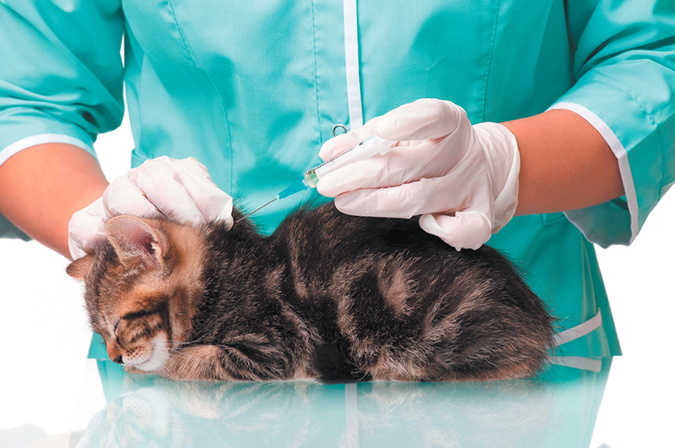 Say “needle,” and some people go weak at the knees. Tell them they have to inject their cat with a needle regularly, and they may feel they just won’t be able to, especially because they fear they will hurt their pet. They won’t. If you’re among the needle phobic and are told you need to administer injections yet still don’t feel convinced, keep in mind that you love your cat and want her to stay as healthy as possible for as long as possible. You can do this.

There are generally two reasons you may have to give your cat injections at home on a regular basis: diabetes or advanced kidney disease. In the case of diabetes, she will require twice-daily shots of insulin. In the case of advanced kidney disease, she will need daily or near daily injections of fluid because she will no longer be able to drink enough water to replace the fluid she loses in urination. Many cats develop this condition. Research suggests that half of all cats between the ages of 10 and 15 develop chronic kidney disease, and almost 70 percent of cats over the age of 15.

Whatever the reason for the injections, keep in mind that cats don’t have needle phobia. Your pet is not going to fear the shots. Also, the injections are not intramuscular, and they don’t go into a vein. They’re given just under the skin — subcutaneously — which makes them much less painful. In fact, a lot of cats don’t find injections painful at all. It’s often a lot easier to get a needle into a cat than a pill, in fact.

If the injections are for diabetes

The easiest way to get insulin into a cat is to make a “tent” out of the somewhat loose, floppy skin just behind the scruff of the neck (between the shoulder blades) and inject the needle there. The needle is tiny, and giving the shot takes only a second. Many cats don’t even notice that it’s happening. There’s no flinching.

Some people practice giving injections on an orange before trying it on their cat, says Elizabeth Rozanski, DVM, emergency and critical care veterinarian at Tufts. “That kind of eases them into the procedure,” she says.

If the injections are for kidney disease

The fluid you administer to a cat with kidney disease will also contain electrolytes like sodium and potassium. You can give the shot pretty much anywhere on the cat’s body, but like with insulin, making a tent between the shoulder blades just at the back of the neck will work well.

Put the needle through the base of the tent’s “front flap.” It will be larger than the needle for giving insulin injections, and if you go too near the top, you could potentially send the needle out through the other side instead of keeping it in the body.

You’ll want to help your cat settle in for a few minutes to a half hour after inserting the needle. A tube connects the needle to a fluid-filled bag that hangs from a hook above your pet, and it takes some time for gravity to allow the fluid to make its way through the tube to the needle and then into your pet.

Some cats prefer the procedure while lying down on the couch or perhaps a favorite perch. Your pet may even want to sit right in your lap. She likely won’t have much energy in the later stages of kidney disease and might enjoy the bonding time.