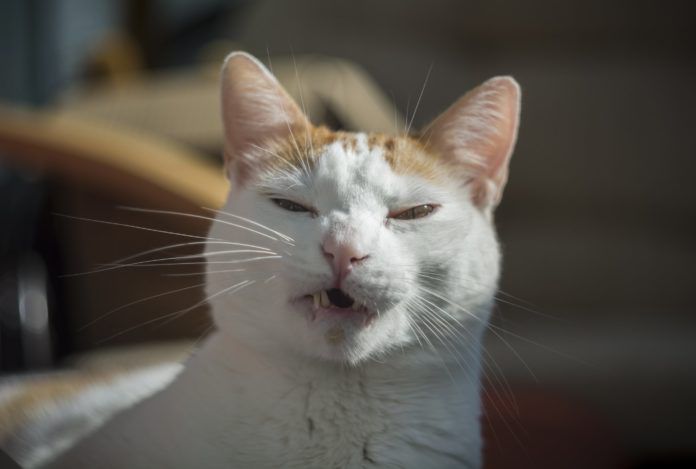 Wheezing, sneezing, teary eyes, nasal discharge and the sound of labored breathing are among the clear indications that a cat is experiencing an upper respiratory disorder of one kind or another. These signs usually indicate a transient viral infection that will resolve within a week or 10 days.

In some cases, however, the signs will persist for longer than that, which will lead an affected cat’s veterinarian to suspect an inflammatory polyp in the nasopharyngeal area. This is a benign (noncancerous) mass of tissue that can develop at the back of a cat’s mouth above the soft palate, partially obstruct breathing.

Inflammatory polyps typically form in the middle ear, the area immediately behind a cat’s ear drum. From there, they may either grow down the eustachean tube and into the nasopharyngeal area, or into the external ear canal. While these growths are benign in themselves, they can cause either breathing difficulty or chronic ear canal infections, depending on their location.

The specific cause of nasopharyngeal polyps is something of a mystery, according to Michael Stone, DVM, an internal medicine specialist at Tufts. Chronic inflammation resulting from viral respiratory infections early in life has been suggested to be the cause. A cat with a viral respiratory infection will show the classic signs of upper respiratory distress, which will soon resolve; but months or years later, the cat will develop rough, noisy breathing, suggesting that a polyp has developed.

Although nasopharyngeal polyps can develop in cats of all ages and are occasionally diagnosed in elderly cats, Dr. Stone points out that they are almost always observed in young adults and occasionally kittens. “The signs will typically include noisy breathing, sneezing and gagging,” says Dr. Stone. “If ear involvement is present, you’re apt to see frequent head shaking and pawing at the ears.”

Other indications that a polyp or several polyps are present include head tilting, snoring, unsteady gait and a change in the cat’s voice. “If untreated,” he adds, “the clinical signs will persist and are likely to worsen as the polyp enlarges. Involvement of the inner ear may lead to head tilt and balance difficulties that will affect the cat’s quality of life.”

The presence of a nasopharyngeal polyp can almost never be made through the physical examination of a conscious animal. “In most instances,” he says, “the tentative diagnosis can be confirmed by means of an oral examination of the patient under general anesthesia. But in some cases, X-rays or even an advanced imaging technique such as a CT scan or a rhinoscopy will be needed.”

According to Dr. Stone, two main options are available for the removal of nasopharyngeal polyps: traction avulsion and surgery. “Traction avulsion is the removal of a polyp from an anesthetized cat by gently and steadily pulling on the growth with a small forceps,” explains Dr. Stone. “This will cure many cats, although some sources estimate that the growths will redevelop in 25 percent or more of patients.”

Treatment following traction removal relies primarily on the short-term administration of antibiotics and, perhaps, oral steroids or ear drops to reduce the chances of recurrence. Surgery, he notes, is recommended for cats with advanced signs of problems associated with the presence of a polyp — such as a severe head tilt — or with the regrowth of a polyp following traction removal.

The surgery involves opening the middle ear to allow removal of the polyp at its origin. “Surgery of this type should only be performed by a board-certified veterinary specialist,” he advises. With appropriate treatment, the overwhelming majority of nasopharyngeal polyps can be permanently cured. — Tom Ewing