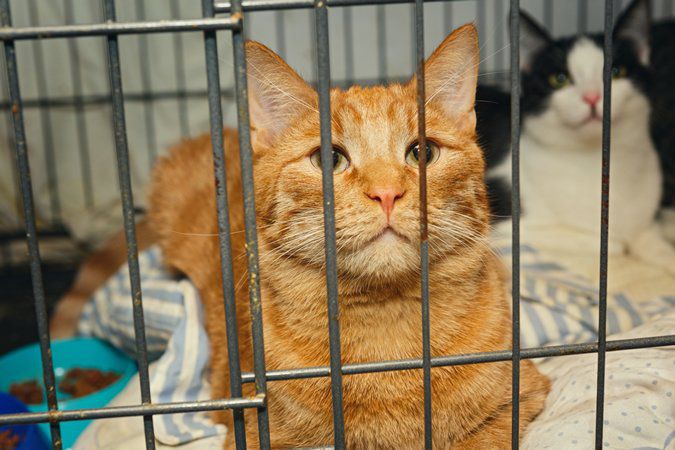 Researchers recently discovered that upper respiratory infections in shelter cats can be dramatically decreased by doubling cage sizes and providing the cats with two compartments. Funded by the Morris Animal Foundation, the UC Davis team of researchers published their findings in the journal PLoS One.

This research is especially important because upper respiratory infection (URI) decreases the likelihood of adoption and is a leading cause of illness and euthanasia in shelter cat populations.

“Shelters can take immediate, practical action based on the results of this study,” said Dr. Kelly Diehl, Senior Scientific Programs and Communications Advisor at the Morris Animal Foundation. “These changes can improve the cats’ well being and ultimately save lives.”

Feline URI resembles the common cold in humans, with typical symptoms of sneezing, nasal congestion and ocular discharge. In cats, the disease is often caused by feline herpesvirus Type-1, which frequently emerges during times of stress. Studies show that a substantial number of cats develop URIs within their first two weeks of coming to a shelter, and many shelters invest a considerable amount of their resources for cat care dealing with this one disease.

The UC Davis team worked with nine animal shelters around North America. The shelter staff recorded data on a daily basis that included how many of their cats had a URI and how long these cats had been at the shelter. Staff also provided information about cage size, places for hiding, disinfection practices and vaccinations.

The UC Davis team discovered that to minimize stress and cases of URI, each cat needed about eight square feet of floor space in their cages (as opposed to the common average of four square feet). Cats were less likely to get sick in double-compartment cages that allowed each cat to remain comfortable on one side of the cage while the other side was cleaned. This configuration also allows for separation of litter box from food, water and bed, which may help to further lower stress.

“Our study demonstrated that a disease we thought was almost inevitable in shelters is absolutely preventable, and prevention could be as simple as just giving the cat enough space,” said Dr. Kate Hurley, Director of the UC Davis Koret Shelter Medicine Program. “The benefits go far beyond just preventing URI. By making these changes, shelters can also make cats happier, lower staff stress by making their jobs easier, and increase adoptions and shelter success in saving lives.”

Dr. Hurley and her colleagues are now assisting shelters in remodeling their existing cages. Obviously, these efforts come with an initial cost, but Dr. Hurley believes that the shelters will ultimately save a significant amount on medical care required for sick cats. — Catnip staff