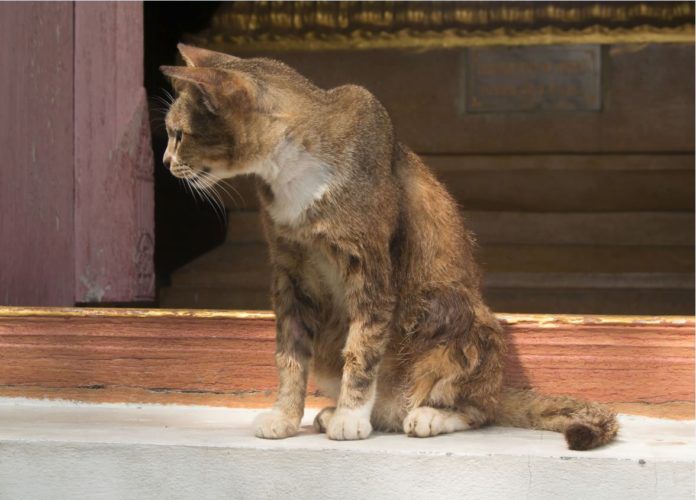 We all know that many cats are finicky, but a distinction must be made between normal, choosy cats as opposed to the cats that are losing or have entirely lost their appetite. Poor or decreasing appetite is one of the most frequent motivations for a cat owner to seek veterinary advice.

The medical term for a lack of appetite for food is anorexia, and we usually qualify it further as being ‘partial anorexia’ (still eating, but much less) versus ‘complete anorexia’ (not eating anything at all). True anorexia must be distinguished from pseudo-anorexia, in which the appetite is normal, but there is a decreased intake of food due to secondary factors, such as a painful tooth, fractured jaw, tongue injury or impaired sense of smell due to an upper respiratory infection.

Anorexia in cats is a very common manifestation of disease. Cats that are eating ravenously present less of a diagnostic dilemma, as there is a shorter list of illnesses that result in increased appetite (diabetes, hyperthyroidism, pancreatic insufficiency and a few others). On the other hand, the list of illnesses that result in decreased appetite is enormous, presenting a far greater diagnostic challenge (as a result, addressing the specific illnesses that could lead to anorexia is beyond the scope of this article).

Instead, we’ll focus on the harm that can result from anorexia, how to know when inadequate food intake reaches a point where it might impinge on the patient’s health and what remedies are available through your veterinarian.

A critical need for protein

As carnivores, cats have a higher protein and amino acid requirement than most other animals. When cats become anorexic, they rapidly become protein-malnourished. Failure to provide adequate nutrition may ultimately be more detrimental than the primary disease that is causing the anorexia. When cats have been anorexic for longer than three to five days, bodily fats are broken down into triglyerides, which the body intends to use for energy. Sometimes these good intentions go awry, and cats may abnormally accumulate triglycerides within their liver cells. This excessive accumulation of fat in the liver is called hepatic lipidosis, and it is a serious liver disorder.

It is always preferable to induce voluntary eating rather than to force cats to eat against their will. The use of appetite stimulants can play a valuable role in this regard. It is very important for veterinarians and owners to acknowledge that appetite stimulation should not be used as a substitute for obtaining an accurate diagnosis and then treating the underlying condition. Nor should appetite stimulants be used in very ill patients, as they are often ineffective.

The most common scenarios for considering appetite stimulants are:

A variety of drugs have been used in cats in an attempt to get them to eat. For years, our best option was the drug cyproheptadine. However, successful use of the drug mirtazapine was first reported in 2006, and subsequent studies report a significant increase in food consumed after mirtazapine was given to healthy cats. As a result, mirtazapine has now replaced cyproheptadine as the most popular drug option for many veterinarians.

Pharmacologically, mirtazapine is classified as a serotonin receptor antagonist, and different articles recommend different dosing schedules. Some veterinarians administer a small amount every 24 hours. Cats with kidney disease have reduced ability to metabolize the drug, so the drug should be given every 48 hours to these animals (and there are some veterinarians who have demonstrated success with dosing every third day). Adverse effects are uncommon, but they may include muscle twitching, hyperactivity, increased vocalization and acting “jittery” in general. These side effects are less likely at lower doses.

The previously-popular cypro-heptadine is an antihistamine that antagonizes serotonin directly. It may take a few days to reach effective blood levels, and it needs to be administered more frequently (every eight hours) as compared to mirtazapine. The drug is metabolized by the liver and kidneys, so cats with liver disease or kidney disease need to have their dosage adjusted downward.

The benzodiazepines are a class of drug that stimulates appetite in cats, with diazepam (Valium) being the best known in this group. It works dramatically when given intravenously, but less consistently when given orally. The effects are short-lived, however, and the amount of food eaten usually falls short of the cat’s nutritional requirements. Side effects include sedation and uncoordinated gait. Multiple reports of a serious, often fatal adverse reaction resulting in severe liver damage have made the use of the benzodiazepines controversial, especially since better alternatives now exist.

The glucocorticoids are a class of drugs commonly prescribed for numerous disorders. Increased appetite is a well-documented side effect, although dogs experience more hunger from these drugs as compared to cats. The appetite-stimulating effect tends to last only a few weeks, and there are many potential side effects (diabetes, congestive heart failure, immunosuppression), making these drugs a poor choice for long-term use as appetite stimulants.

In my feline practice, we often diagnose cats with inflammatory bowel disease (IBD). Poor appetite is a common clinical sign of IBD. Prednisolone, a glucocorticoid, is the drug of choice for treatment. When initially administered at relatively high doses for IBD, the increase in appetite is likely due to the appetite stimulating effect of the drug. As the dosage is gradually tapered to every other day therapy, the continued good appetite is likely due to resolution of the IBD.

Megestrol acetate is a synthetic progestin hormone. Occasionally it will stimulate a cat’s appetite, but risk of serious side effects precludes its use for this purpose.

Most cats presenting with anorexia have an underlying systemic disease, and pharmacological enhancement of appetite should never take the place of a thorough diagnostic work-up to determine the cause of the anorexia. Appetite stimulants, if used properly, may help revive a cat’s waning appetite. However, if the cat doesn’t respond to appetite stimulants, assisted feeding through the use of feeding tubes, or even intravenous feeding, may be warranted. — Arnold Plotnick, DVM, DACVIM