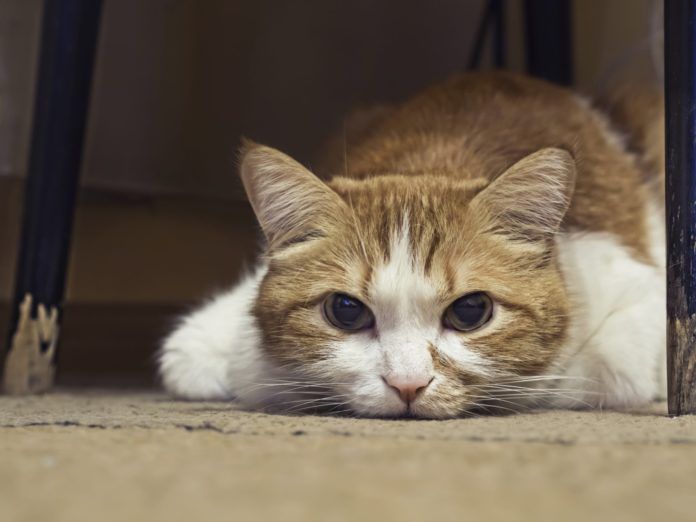 Unfortunately, cats don’t do a good job of telling us when they’re sick,” says Tufts emergency and critical care veterinarian Armelle de Laforcade, DVM. “Their signs can be subtle. Sometimes, their response to illness is just to be quieter, and that can be easy to miss.” To help you know when to make an appointment for your cat at the vet’s office — and when to jump in the car and get him there as soon as possible — Dr. de Laforcade goes over some common signs, and how seriously to take them.

Vomiting. “This is the most common clinical sign that makes people bring their cats to the veterinarian’s office,” explains Dr. de Laforcade. “It’s hard to tease out the cause because it’s so non-specific. If it’s a young cat, we’re suspecting he might have eaten something he shouldn’t — any form of string, dental floss, small bits of plastic, toys. In older cats, vomiting might be a sign of underlying liver or kidney problems. Cats tend to be less ‘naughty’ by middle and old age and don’t get into things they shouldn’t.”

Should vomiting trigger an immediate visit to the veterinarian? Occasional vomiting of hairballs is not serious, and can often be prevented by frequent brushing. Sometimes what looks like vomiting can just be coughing up hairballs. If a cat vomits a few times, watch his overall demeanor and see if it remains okay or if he becomes lethargic. If he doesn’t seem like himself, if he vomits many times, and especially if he stops eating, bring him to a vet within 24 to 48 hours.

In the case of a young cat, the doctor will palpate the abdomen to feel for a foreign object and probably also take an X-ray to investigate further for obstructions. An older cat who has been vomiting will elicit a lot of questions regarding any recent weight loss and behavior changes, and will also prompt diagnostic tests to check for illnesses such as kidney disease, cancer and liver disease.

Labored breathing. If your cat has shortness of breath or is breathing hard, go to the vet’s office pronto. The first thing the doctor will probably do is put him in a cage with an oxygen-rich environment so he can breathe a little more easily, then wait until he is feeling less stressed from the ordeal and work him up to see whether it’s asthma or congestive heart failure that’s causing the problem. Those are the two most common causes of difficulty breathing (aside from trauma, such as being hit by a car).

“Asthma tends to be a slightly younger cat disease,” says Dr. de Laforcade, “and may be associated with a history of a cough. Heart disease is more common in the older population, although it can start earlier.”

Fortunately, both illnesses are very treatable. Cats with asthma will be given corticosteroids, just like people with that condition. Cats with heart failure will receive a diuretic to clear the fluid build-up in or around their lungs that makes breathing difficult. Other medications may be prescribed as well. A cat with heart failure can have a good quality of life once his disease is brought under control.

Difficulty urinating. Male cats, much more often than females, develop obstructions that make it difficult to urinate. They can end up with an accumulation of mucus and grit in the bladder that plugs the urethra — the tube that passes urine from the bladder to the outside. An owner may see the cat making frequent trips to the litter box — going in and out but not voiding much urine. Sometimes the cat will meow because he’s not comfortable.

If the cat is managing to get out a moderate amount of urine, make an appointment to see the vet within 24 to 48 hours. If the cat is not able to urinate at all or just stains and produces a few drops, his life may be in danger, so it is best to get him to the vet immediately.

Once at the doctor’s office, he will be sedated and have a catheter passed into his bladder to relieve the obstruction. “In many cases,” Dr. de Laforcade says, “we’ll leave the catheter for a day or two to flush out the bladder and let any inflammation subside. Owners should then consider a urinary-friendly diet” — a therapeutic diet you can buy only from a veterinarian that will reduce production of the materials that cause obstructions. If that doesn’t work and the cat has more episodes of difficulty urinating, there are surgical options that can take care of the problem permanently.

Increased thirst. “There are three main diseases that make cats drink more,” explains Dr. de Laforcade: “kidney disease, overactive thyroid (also called hyperthyroidism) and diabetes. All tend to be associated with somewhat advanced age, although diabetes can occur from middle age on.” Excessive drinking should be checked out. “It doesn’t have to be tomorrow,” Dr. de Laforcade says, “but give a call and make an appointment to have some tests done. ” All three conditions are very treatable, if diagnosed early.

Note: Increased thirst often is accompanied by increased urination. In the case of kidney disease, increased urination is often the earliest sign, detectable even before blood work will show anything’s amiss. “It’s not an emergency,” stresses Dr. de Laforcade. “It’s a reasonable compensation for the kidneys’ decreased ability to conserve water. Just make sure your cat who is drinking more than he used to always has plenty of fresh water available. And bring him to the vet for a diagnosis.”

Marked change in appetite. If a cat stops eating and drinking altogether, do not delay getting him to the veterinarian’s office by more than a day. He may have kidney disease, and the sooner it’s managed, the more comfortable your pet will be — and the longer he will live.

Trauma. This is going to tend to be more of an issue for the cat who is allowed to roam outdoors. He’s at risk of being hit by a car, attacked by another animal, getting caught in a fence — not to mention being exposed to various diseases.

Not all signs of trauma are cause for an immediate visit to the veterinarian. For instance, if a cat comes home with scuffed or frayed toenails, he has obviously gotten into some kind of tangle. But if there are no evident wounds and he is breathing and eating right, you can wait to see how he does overnight before deciding whether to bring him in. To check for wounds, run your hands all over your cat’s body. If you find superficial scrapes, don’t feel compelled to bring him in immediately, but remain extra-vigilant about your cat’s overall mien over the next several hours.

If, on the other hand, you come across small puncture wounds, say, from another animal’s sharp canine teeth, consider having your cat examined at the next available opportunity. The wounds may not seem bad, but sometimes, there can be internal bleeding or torn muscles, and the cat won’t seem in bad shape till the next day.

Of course, if your cat comes in from outside and has a gaping wound or difficulty breathing or will not eat or drink, take him to the emergency room right away.

It might seem that taking a cat’s vital signs can help you determine whether he’s in a state of emergency. “However, I worry a little about people trying to determine the seriousness of a situation by themselves because it can be tricky,” emphasizes Dr. de Laforcade. For instance, you may find upon taking a cat’s temperature that he doesn’t have a fever, but a cat can still be quite sick in the absence of an elevated temperature — especially if he’s not eating or urinating.

That said, here are a couple of vital numbers:

Temperature: Normal: 100 – 102.5 degrees F (taken with a rectal thermometer made for cats). Note: A sick cat’s temperature can be too low as well as too high.

Pulse rate: About 160 – 180 beats per minute. Take a cat’s pulse by cupping your hand over his chest. Feel for the heartbeat, count how many beats there are in 15 seconds, then multiply by four.

Another way to check a cat’s health is to look at his gums. Make sure they’re pink. If they’re white, make an appointment with your veterinarian. It means the cat’s tissues aren’t getting as much oxygen as they should.

But the best thing an owner can do to assess her cat’s health is simply to be in tune with her pet. You know your animal better than anyone else, emphasizes Dr. de Laforcade. “If you feel like something’s wrong, you’re probably right.” — Catnip staff