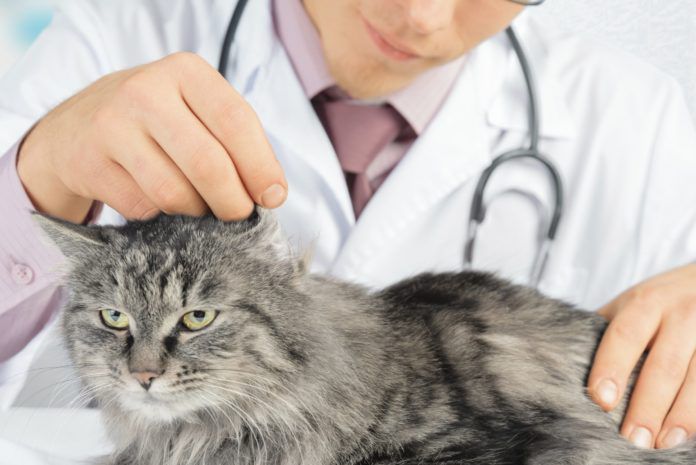 A few months ago, a client brought her four-month-old female kitten, Squeegee, to my feline-only veterinary hospital for an exam. The kitten had been doing great, eating well, growing nicely and playing like a maniac — until two days before when she began to vomit. She became lethargic, the vomiting progressed and her appetite abruptly disappeared.

My physical examination revealed a markedly subdued, dehydrated little orange tabby. Her body temperature was normal, and she was an appropriate weight for her age. The exam was fairly unremarkable, until I got to the abdomen. As I gently pressed on her belly with my fingers, I could feel a tubular, sausage-like structure. She squirmed and tried to get away. I gave her a little break, and then I softly pressed again to be sure of my findings.

It was unmistakable; there was something seriously amiss in Squeegee’s belly. She was too young for cancer or inflammatory bowel disease. A discreetly thickened loop of bowel in a kitten is highly suspicious for a condition called intestinal intussusception, so I recommended abdominal ultrasound to corroborate the diagnosis. My suspicions were quickly confirmed, and preparations for immediate surgery were made.

Intussusceptions have been well-described in dogs. They are most common in young dogs, with German Shepherds being the most commonly reported breed, but experts feel it’s debatable whether there is a true breed predisposition. Less information is available regarding intussusceptions in cats.

In 1994, a study consisting of 12 feline cases was reported. Similar to dogs, the majority occurred in cats that were under one year of age. Most cases involved the domestic shorthaired breed, although Siamese and Burmese cats were overrepresented, suggesting that these breeds might be more susceptible. However, this was a small study. A few years ago (2009), a larger case series was published (20 cats) that shed additional light on the subject.

A more recent study
In this more recent study, there was a bi-modal age distribution: 10 of the 20 cats were under a year of age when the intussusception occurred. Interestingly, nine of the cats were older than six years of age. (The remaining cat was two years old.) The most common clinical signs reported were the same signs that I saw in the kitten Squeegee: poor appetite, lethargy and vomiting. Weight loss and diarrhea were also commonly reported.

Most of the cats examined had some degree of dehydration. Nearly all of the cats had some abdominal abnormality that could be discerned during the physical exam, including abdominal pain, an abdominal mass or a discreetly thickened segment of intestine.

How a diagnosis is made
Once there’s a suspicion of intussusception, the diagnosis needs to be confirmed. X-rays usually reveal a vague abnormality of the intestinal tract. However, a definitive diagnosis cannot usually be made on X-rays alone. Ultrasound is a better test for making the diagnosis. In the study from 2009, seven cats underwent abdominal ultrasound, and in all seven cats, a definite diagnosis was made based on the ultrasound findings. It was ultrasound that confirmed the diagnosis in Squeegee, as well.

In some cases, however adhesions have formed between the two pieces, and they cannot be separated from each other. In these cases, the entire intussusception needs to be surgically removed from the intestine, and the two normal ends of the intestine sutured to each other.

What is enteroplication?
Recurrence of intussusception after surgery has been reported in dogs. Interestingly — in dogs and people — if recurrence occurs, it is usually in an anatomic location other than the original site. In an attempt to reduce the risk of recurrence, a surgeon may elect to perform a procedure at surgery called “enteroplication.” This technique creates permanent attachments between adjacent loops of intestine.

Although this procedure is said to reduce the incidence of recurrence, it can sometimes lead to complications. Thus, the decision whether or not to perform enteroplication is at the discretion of the individual surgeon.

Recurrence of intussusception appears to be less of a problem in cats than in dogs, although data to confirm the actual incidence are lacking. In the study from 2009, 13 cats underwent surgery. One cat was euthanized at the time of surgery. Three of the 12 cats that underwent surgery also had enteroplication performed. Two of those three cats experienced significant complications from the enteroplication; one cat died and one had to be euthanized. The other 10 cats were discharged from the hospital. Five of them were lost to follow-up, but the other five did well and never experienced a recurrence of intussusception.

Owing to the small number of cats in the 2009 study that underwent enteroplication, we aren’t able to draw any conclusions as to whether this technique is beneficial or not in preventing recurrence, compared to the potential risks.

How Squeegee is doing now
Squeegee’s intussusception was easily reduced at the time of surgery, and enteroplication was not performed. She was spayed at the same time. Her owner brought her in for a wellness checkup recently, just before her first birthday. She is doing well and weighs approximately twice as much as when she came in to my hospital feeling sick. Because recurrence is a possibility, we will always remain on guard, but for now it seems that she’s made a total recovery. — Arnold Plotnick, DVM, DACVIM