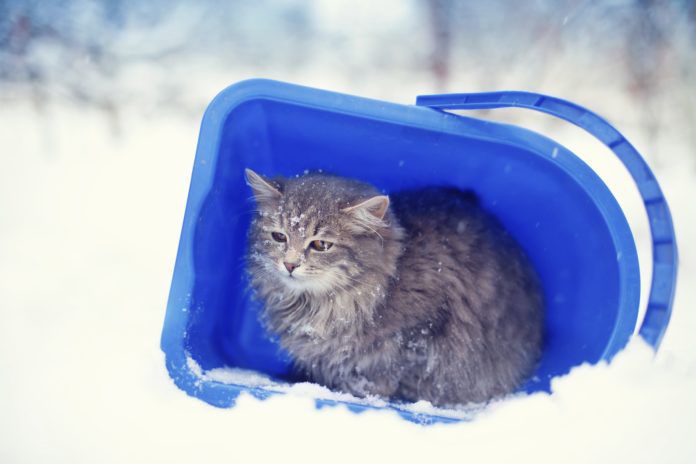 With the arrival of winter, you’ll want to take the necessary measures to protect your cat against the health hazards that cold, inclement weather can create — especially if you live in those areas of the U.S. where plummeting temperatures, harsh winds and heavy snowfalls commonly occur. Most vulnerable to various cold-weather disorders, of course, are those cats who spend all or the bulk of their time outdoors.

Cats who are allowed to go outside even for brief periods of time during the winter months are also at significantly greater risk than those who never put a paw beyond the front door. Most susceptible are kittens younger than three months of age or so and geriatric cats, especially those with cancer, arthritis or other debilitating disorders.

“In general, we recommend that cats be kept indoors all of the time when it’s very cold outside,” says Elizabeth Rozanski, DVM, associate professor of emergency and critical care in the Department of Clinical Sciences at Tufts. “If they are allowed to go outside, they should be provided with some sort of shelter — like a garage or barn — where they can get out of direct wind.”

The danger of hypothermia

Among the most serious of cold-weather threats to feline health is hypothermia, a potentially deadly drop in body temperature. A cat’s normal temperature ranges between 100F and 102F. Hypothermia may be defined as any sustained decrease in body temperature below 100F. Most cats can tolerate a temperature drop of five or six degrees for a short period of time without severe or lasting damage.

If the decline persists, however, the animal’s oxygen requirements will decrease and, as a result, her blood circulation will decline correspondingly. If untreated, the decreased flow of oxygenated blood will eventually inhibit the cat’s metabolic functioning and will result in progressively severe and widespread damage to the tissues of her internal organs. Meanwhile, the cat’s blood pressure will continue to drop, her heart rate will slow down, and she may experience cardiac arrest.

The major clinical sign of hypothermia, according to Dr. Rozanski, is lethargy. “The cat will become weak and collapse,” she says. “A veterinary exam and laboratory tests will reveal some biochemical changes, such as a low pulse rate and high blood sugar. But what the owner will notice is that the cat will be listless and unresponsive.”

Also, the surface of a hypothermic cat’s skin will be noticeably cold to the touch; if low body temperature is suspected — which can be confirmed by taking the cat’s temperature with a rectal thermometer — treatment to warm the animal’s system must begin immediately.

What you should do

If mild hypothermia (97F to 99F) is apparent, the owner should simply confine the animal to a warm indoor area and cover her loosely with warm blankets. This will stop further heat loss and allow the animal’s body to reheat naturally and gradually.

However, if the animal’s rectal temperature falls below 97F, the rewarming process could be considerably more complicated, in which case she should be wrapped in warm towels and rushed to a veterinary clinic. Emergency treatment may require internal as well as external warming techniques, such as warm-water enemas, intravenous fluid therapy, oxygen support, and constant monitoring of heart rate, blood pressure and respiration.

The treatment’s success will depend on a wide variety of factors, such as the length of time that the cat has been exposed to frigid temperatures and her general health status and ability to naturally compensate for the hypothermia. All cases of suspected hypothermia warrant prompt treatment, regardless of whether the condition is thought to be mild, moderate or severe.

The danger of antifreeze

Another severe health threat that most often occurs during bouts of cold weather is antifreeze poisoning, which affects cats who spend much or all of their time outdoors. The active ingredient in most brands of antifreeze is ethylene glycol, a sweet-smelling and sweet-tasting liquid that may attract a cat who lacks ready access to her water bowl.

“A cat doesn’t have to drink very much of it,” stresses Dr. Rozanski, “to become seriously ill — just a teaspoon or two, which she can lap up in a few seconds and become very sick very quickly.” The most likely candidate for ethylene glycol poisoning is an animal who has been inadvertently locked in a garage with no source of refreshment other than an overlooked puddle of antifreeze on the floor. Predictably, many cases of such poisoning occur during cold winter months when people — including cat owners — routinely top-off the supply of antifreeze in their car radiators.

Antifreeze poisoning occurs in two phases. In the first phase, a cat who has just ingested the liquid will appear to be intoxicated — staggering and stumbling drunkenly as the chemical is being absorbed from her gastrointestinal system into her bloodstream. After an hour or so, this behavior will abruptly cease as the second phase of the poisoning progresses, during which the ethylene glycol starts to be metabolized in the liver, a process that produces toxic substances. Within a matter of hours, the proliferation of these substances can lead to a dramatic increase in the level of acidity in the animal’s body fluids. If the cat has consumed a very large amount of antifreeze, this process will yield calcium oxalate, a compound that eventually becomes deposited as crystals in the kidneys. And in most cases, these crystals will cause life-threatening renal failure in an untreated cat within 20 or 30 hours after antifreeze ingestion. Without complex emergency care, the prognosis is poor in a case of feline antifreeze poisoning that has reached the kidney phase.

Some manufacturers in the United States have voluntarily begun to add a bitter-tasting agent to antifreeze and engine coolant products to discourage children and animals from drinking it (when buying antifreeze or engine coolant, check the ingredient list for denatonium benzoate). Being “safer” doesn’t mean that anti-freeze will ever be “safe” — so take precautions with any brand you purchase.

Other dangers to consider

In addition to hypothermia and antifreeze poisoning, Dr. Rozanski points out, several other serious threats to a cat’s overall good health can be brought on either directly or indirectly by unusually cold weather. Frostbite, for example, is a condition in which an animal’s tissues — especially those on her paws, tail, and the tips of her ears — are exposed to freezing conditions. When the temperature drops below freezing, the blood flow to the outer surfaces of a cat’s body diminishes — a natural response that ensures an adequate flow of blood to her vitally important internal organs. Unfortunately, prolonged exposure to a sub-freezing temperature can cause tissue death. An affected area will become brittle and discolored — turning white, red or gray — and is likely to peel off.

“Owners probably aren’t going to notice frostbite right away,” says Dr. Rozanski. “What they’ll find is a cat who has collapsed and then notice the frostbite on her paws or ear.” While not life-threatening in itself, frostbite will typically be extremely painful to an affected cat, and veterinary attention should be pursued without delay. Expert cleansing of the damaged area will be necessary, and careful removal of the damaged skin tissue will be required.

To an extent, Dr. Rozanski points out, common sense should dictate some measures that owners should take to safeguard their cats well-being during cold weather. For example, dry your cat’s fur thoroughly after she has been outdoors in rain or snow; if you use a fireplace, be sure that it is properly screened so that a flying spark doesn’t strike her as she naps comfortably on the hearth; shovel deep snow off the walkways in front of your home so that she doesn’t get stuck in it; if you live on a heavily trafficked street, keep your indoor-outdoor cat confined to your property so that she won’t be struck by a passing automobile.

Regarding a cat’s diet, Dr. Rozanski adds: “If she’s going to be indoors all the time, she can eat the same kind and same amount of food she’s used to eating in warmer weather. But if she’s in the habit of going outside, she’ll be burning more calories in order to stay warm. So make sure she has access to larger servings of her food.” — Tom Ewing