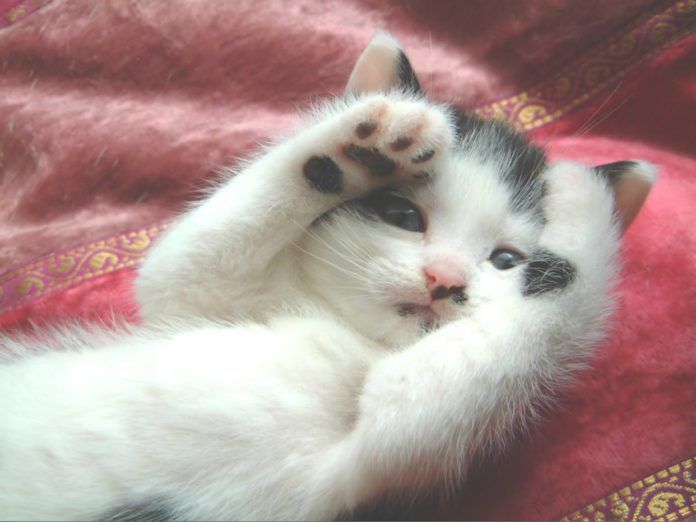 A normal kitten weighs three or four ounces at birth, and after consuming only her mother’s milk, will typically gain as much as a half-ounce per day. She will double her birth weight during her first week out of the womb. By the time she is three weeks old, she will have tripled her birth weight. And while this rapid growth rate will soon taper off, the kitten will quickly blossom into feline adulthood.

“Most kittens will be full-grown and have developed their adult physical characteristics by the time they reach 12 months of age,” explains Michael Stone, DVM, a faculty member in small animal medicine at Tufts. At that point, they will have transitioned from total dependency on their mothers’ milk to the cutting of their baby teeth and their introduction to an adult diet.

“When a healthy young cat reaches that stage of development,” says Dr. Stone, “she should have a normal appetite, her body condition should be good — neither noticeably thin nor overweight — and she should have a high energy level.”

While most kittens will progress successfully into healthy adulthood, owners should be aware of the disorders that can threaten the health of a young cat during her formative months. “A healthy kitten will show no signs of illness such as limping, coughing, sneezing, vomiting or excessive thirst or urination,” explains Dr. Stone.

“If the kitten is very young and unable to eat without her owner’s assistance, a veterinarian should be consulted without delay,” stresses Dr. Stone. “Because their immune systems are immature, kittens are far more susceptible to disease than mature cats are. They simply haven’t been exposed to bacteria and viruses in the environment, and if they haven’t been appropriately vaccinated, they are naturally going to be susceptible to a host of common contagious diseases.”

The most common threats

Dr. Stone identifies the following health problems as being among the most frequently observed in kittens:

Roundworms: Classified as nematodes, owing to their distinctively cylindrical, unsegmented bodies, these spaghetti-like creatures enter a kitten’s body when the animal ingests larvae that are present in the milk of an infected queen.

Over time, the larvae will hatch, develop into mature worms, and migrate through the kitten’s gastrointestinal system. Roundworms can cause vomiting and diarrhea in a kitten, and if enough of them collect in the intestine, they can create a life-threatening blockage. Due to the serious — and potentially deadly —health threat posed by roundworms, veterinarians agree that all kittens be routinely tested and dewormed.

Ear Mites: Although these spiderlike little creatures are about the size of a very small pinhead and almost invisible to the naked eye, their accumulation within the ear of a host can lead to discomfort unless promptly recognized and removed.

Their presence, says Dr. Stone, can be suspected in a kitten who relentlessly scratches at her ears, the interiors of which are likely to be caked with a dark discharge resembling coffee grounds.

If ear mite infestation is suspected, a kitten’s owner should seek veterinary care without delay. Aside from relieving the kitten’s considerable discomfort, veterinary attention can also prevent a more serious ear disease called otitis externa — an infection of the outer ear that can on occasion be difficult to treat.

Fleas: Obsessive and aggressive scratching is a clear indication that a kitten’s hair coat has become infested with fleas, especially if the air inside her home is warm and humid. On close inspection, the insects can be seen with the naked eye, usually on the cat’s belly, back or near the tail. (See related article on page 5 of this issue.) A veterinarian can usually confirm suspected flea infestation by means of a thorough physical examination and possible skin testing.

If a definitive diagnosis of flea allergy is established, the veterinarian may prescribe any of several effective systemic medications designed to either kill the fleas or moderate an affected kitten’s immune response and thereby reduce inflammation. However, owners must be aware that no such product should ever be used without the specific advice of a veterinarian — especially on kittens younger than six weeks of age.

Upper respiratory infections: These highly contagious disorders affect a kitten’s nasal cavity, sinuses, pharynx and larynx. The clinical signs are usually obvious: sneezing, wheezing and nasal discharge; lethargy; and fever. In most cases, the signs will persist for a week or 10 days before fading away without causing lasting harm. Owners should be aware, however, that some respiratory infections can progress to secondary complications such as pneumonia. Most such infections are caused by either the feline rhinotracheitis virus (FRV) or the feline calicivirus (FCV).

Eye Infections: At birth, a kitten’s upper and lower eyelids are closed. When the kitten is 10 days to two weeks old, the lids separate. At that point, or at any time during the following weeks and months, it may become apparent that the kitten is harboring a vision-impairing eye disorder. Among the most common of these eye conditions is a highly contagious disease called conjunctivitis, otherwise known as “pink eye.” This disease is usually caused by infection of the membrane on the surface of the eyeball and eyelids with certain bacteria or with the feline herpesvirus (FHV). If untreated, conjunctivitis can eventually lead to permanent blindness.

Another eye disorder that is frequently diagnosed in kittens is ulceration of the cornea, the transparent surface covering and protecting the front components of a kitten’s eyes — the iris, the pupil and the fluid-filled anterior chamber.

Dr. Stone identifies two additional health problems that are especially common in kittens: malnutrition, resulting from either a lack of food or from a kitten being fed exclusively a diet of inappropriate food, such as chicken or cow’s milk; and physical damage — deep wounds, broken limbs, and so forth — sustained in falling from a high perch, being attacked by another animal, being struck by a car, or any other type of traumatic experience.

To promote good health, veterinarians recommend that every kitten be dewormed initially at two or three weeks of age. The deworming should then be repeated every two or three weeks until the animal has matured and is ready to be put on an adult schedule. And, of course, all kittens should be vaccinated to protect them against FHV and FCV — as well as the feline panleukopenia virus (FPV), the feline leukemia virus (FeLV), and rabies — according to guidelines set forth by the American Association of Feline Practitioners.

In addition, Dr. Stone recommends the following: “If the kitten appears to be healthy, you should schedule veterinary examinations for her at eight, 12 and 16 weeks. If you suspect that she might be ill, however, you should have her examined immediately.”

Regarding spaying or neutering, he contends that these procedures are advisable for the great majority of cats for health, behavioral and ethical reasons . However, he adds: “Although they may be safely performed as early as eight weeks of age, I typically recommend that it be done at five or six months of age.” — Catnip staff