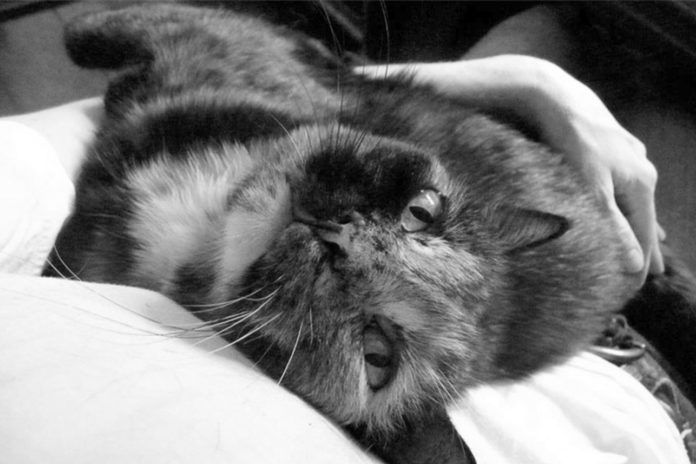 Jo Miller wasn’t too worried initially when her 15-year-old tortie, Zilpha, stopped eating and became lethargic. The Emmy award-winning writer for “The Daily Show” had been through this scenario a year earlier — when Zilpha was diagnosed with chronic pancreatitis — and she suspected that this was another flare-up.

I examined Zilpha, and her clinical signs were indeed compatible with pancreatitis — but more worrisome to me was the observation that Zilpha was breathing hard. I knew that Zilpha was asthmatic, but she had always been well-controlled on her medication. I asked Jo how long Zilpha’s breathing had been labored like this. She told me at least a few days.

Intravenous fluid therapy is an important aspect of the therapy for feline pancreatitis, so I admitted Zilpha to our hospital to begin treatment. However, I was concerned about fluid administration, because if Zilpha’s heavy breathing was due to heart disease rather than lung disease (i.e. the asthma), aggressive fluid therapy could actually make things worse. To gather more information, I took X-rays of Zilpha’s chest.

The images were not challenging to interpret. The radiographic pattern in the lungs fit with asthma — but pulmonary edema (accumulation of fluid within the lungs, a cardinal sign of heart failure) can have a similar appearance. The changes in the lungs caused the silhouette of the heart to be obscured, preventing an accurate assessment of the size of the heart. Cardiac ultrasound is the most informative test to determine if heart disease is present. Unfortunately, this procedure requires the expertise of a veterinary cardiologist. With no clear-cut diagnosis — and Zilpha’s breathing getting a little worse — I had no choice but to send Jo and Zilpha to a nearby referral center for cardiac ultrasound.

If there was a quick and simple blood test to distinguish lung disease from heart disease, I could have begun treating Zilpha promptly. Is such a test even a possibility?

There is a hormone that is synthesized in certain heart muscle cells. The hormone is called B-type natriuretic peptide (which we abbreviate as BNP). It is stored in the cardiac cells in the inactive or “pro” form, as proBNP. When the heart muscle is stretched or distended, the hormone proBNP is cleaved into two smaller molecules and is released into the blood stream.

One of the molecules is called “N-terminal” proBNP, which we abbreviate NT-proBNP. (Some people ask: Why can’t they give it a simple name, like the hormones insulin or cortisol?) The principle behind the test is simple: The more severe the heart disease that is present, the more stretch or distention will occur on the heart muscle, and the more NT-proBNP will be released into the blood.

In humans, the main reason for running this test is to distinguish labored breathing due to heart disease from labored breathing due to non-cardiac causes. In people, the level of this hormone is also used to predict prognosis; the higher the level of the hormone, the worse the survival time. The test has been shown to be useful in dogs. Could the test be helpful in assessing illness in cats?

As noted with Zilpha, it can be a diagnostic challenge to determine if a cat with signs of respiratory distress is afflicted with cardiac disease or pulmonary disease. This determination is vital in order to select the appropriate treatment. Cardiac ultrasound is an excellent means of determining whether a cat has cardiac disease; however, this procedure is not available in every hospital, and cats with severe clinical signs may require stabilization first in an oxygen cage prior to any diagnostic testing.

These challenges have been the driving force for finding a test that can differentiate cardiac vs. pulmonary causes of respiratory distress in cats. So far, three studies of NT-proBNP have been performed in cats, and all three studies revealed that cats with congestive heart failure display elevated levels of NT-proBNP — to a degree that distinguishes them from cats with labored breathing from non-cardiac causes, with a high degree of accuracy.

When used in conjunction with conventional tests like X-rays and thorough physical examination, the accuracy improved further, demonstrating the usefulness of the test when cardiac ultrasound was not immediately available, as in Zilpha’s case. (If cardiac ultrasound is available, the NT-proBNP test is not necessary, since ultrasound is certain to determine whether heart disease is present.)

Another potential use of this test is to detect “occult” cardiomyopathy in cats, i.e. heart muscle disease that is subclinical. These cats may have indications that a heart disorder is present, such as a heart murmur heard on physical examination, or a larger than normal heart silhouette seen on X-rays, but no clinical signs of illness. Detecting heart disease before clinical signs develop with a simple blood test would be a major advantage, since hypertrophic cardiomyopathy (HCM), the most prevalent feline heart disease, is a significant cause of death in cats.

As noted above, cardiac ultrasound would detect early heart disease; however, this test is not always available and may be cost-prohibitive for some cat owners. A blood test would make this determination much easier. As it happens, numerous studies have confirmed that the NT-proBNP assay can indeed differentiate normal cats from those with occult cardiomyopathy, again with a high degree of accuracy. Granted, the test is better suited for distinguishing cats with moderate-to-severe cardiac disease from those with healthy hearts, but it will detect cats with occult disease as well.

Limitations of the NT-proBNP Test for Cats

The NT-proBNP test in not without limitations. One issue is that the molecule is unstable at room temperature, and thus requires cumbersome sample handling. Blood has to be drawn into an EDTA tube, centrifuged to obtain plasma, and then the plasma transferred into a special tube (supplied by the lab that runs the test) and shipped to the lab on the same day. If the sample cannot be sent immediately, it needs to be stored in a freezer to prevent degradation of the NT-proBNP molecule.

The major stumbling block, however, is the long turnaround time. By the time the sample is received and the test is run and results reported, days have passed. The NT-proBNP test is only likely to be truly useful if the test can be run immediately, in the veterinary hospital, similar to the way feline leukemia virus tests are run. Can these kinks in the testing be ironed out? A pilot study was performed on a rapid, cage-side NT-proBNP test, and the results looked promising. Whether this test can be produced commercially remains to be seen.

The NT-proBNP test is a fairly accurate test, if used wisely and appropriately. Indiscriminate testing, for example, employing the test to screen for heart disease in a population that is unlikely to have it, such as young healthy cats about to be spayed, will decrease the accuracy (i.e., there’s a greater likelihood that a positive test may be a “false” positive”) than if you run the test on a population of cats more likely to have heart disease (for example, cats with heart murmurs), where a positive test is very likely to be a “true” positive.

Currently, it remains to be determined whether or not to use the NT-proBNP test as a screening test, for example, as part of a geriatric profile in otherwise healthy cats. Current recommendations are to run the test only in cats suspected to have heart disease, for example, cats with a heart murmur, abnormal rhythm, radiographic evidence of heart enlargement, labored breathing or a history of heart disease in a related littermate.

At the referral center, Zilpha was determined to have pancreatitis, asthma and heart disease. For two days, things were touch-and-go, with Zilpha struggling to breathe even in the oxygen cage. On day three, however, Zilpha’s condition improved dramatically, and she was able to be weaned off of oxygen and taken out of the oxygen cage. She soon began eating again. And purring. And demanding to be taken home, a demand to which Jo Miller happily complied.

I have since performed several housecalls to check up on Zilpha (housecalls are best for Zilpha, because she rapidly transforms from angel to devil when she arrives at the office), and her condition continues to improve. If not for the multitude of medications she requires, you would never know Zilpha was ill.