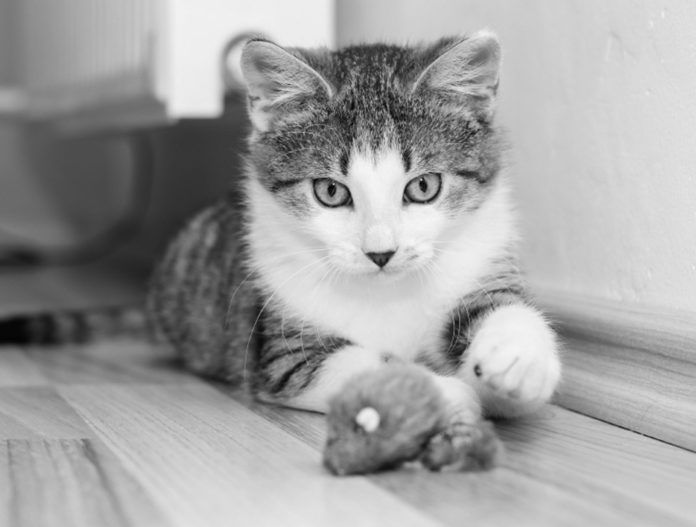 Changing a cat’s routine — for example by bringing in a substitute caretaker at vacation time or starting a new feeding schedule — can prompt an otherwise perfectly healthy cat to vomit, refuse to eat and eliminate outside the litter box. This was the key finding of research at Ohio State University that was recently published in the Journal of the American Veterinary Medical Association. Healthy cats were found to be as likely to react in these ways as were chronically ill cats with feline idiopathic cystitis, whose symptoms can include inappropriate urination and frequent urination of small amounts. Idiopathic cystitis means inflammation of the urinary bladder of unknown cause.

What’s more, the study also revealed the flip side: adopting a standard feeding, play and cleaning schedule appeared to make cats with feline idiopathic cystitis look better, with shinier coats and clearer eyes. This suggests that enriching a cat’s environment holds promise as a form of therapy, which is welcomed because there is no reliable drug therapy for idiopathic cystitis, notes Tony Buffington, DVM, professor of veterinary clinical sciences at Ohio State and senior author of the study.

Make the home interesting for your indoor cat
The upsides to enriching a cat’s environment and adopting a normal routine have been long known, reports Nicholas Dodman, BVCMS, veterinarian and Director of the Animal Behavior Clinic at Cummings School of Veterinary Medicine at Tufts University. He rattles off a long list of ideas for enrichment, including providing a view, edible grass, a fish tank, lots of toys (preferably moving toys), food puzzles and laser games for indoor cats. Adopting a second cat with whom your cat gets along with can also help. The best feeding schedule is several times a day to mimic life in the wild; automatic pet-feeding stations with timers can help make this easy, if obesity issues prevent you from keeping dry food in a bowl all day.

Still, any perturbation — a repairman working on your home, a new baby, moving furniture around — could prompt a cat to mark territory.

“This is just plain old anxiety,” Dr. Dodman says. “Marking is caused by any environmental stress. It can happen when someone moves in — I had that recently.”

Another example: You go on vacation and a temporary caretaker comes in. The cat, Dr. Dodman says, thinks: Geez, this is not the same. Who is this strange person? Oh, I’m stressed — I better run around and mark my territory to make sure people know I live here.

“Do I think medical conditions can be made worse by stress? Yes,” Dr. Dodman says. “It’s good not to be stressed. It’s good to have a nice enriched home to live in.”

In the Ohio State research, healthy cats and chronically ill cats were more than three times as likely to act sick when their routines were disrupted as when life was normal. Researchers at Ohio State’s Veterinary Medical Center studied cats housed there for three years: 12 were healthy cats and 20 had idiopathic cystitis (or what Dr. Buffington terms “interstitial cystitis”). The colony of cats was accustomed to being cared for by Judi Stella, a doctoral candidate in veterinary preventive medicine, who played classical music for up to two hours daily.

To enrich the cats’ environment, morning care and feeding were done at the same time each day, lots of commercial cat toys and clean litter boxes and bedding were provided, and food and litter boxes were kept in consistent locations. Cats also were let out of their cages for an hour to 90 minutes every afternoon so they could interact, play with toys or use climbing and scratching posts.

Dr. Buffington said this study and others have shown OSU researchers that “by enriching the environment, you can reduce IC cats’ symptom burden by about 75 or 80 percent.”

He continues, “We are cautious about extrapolating these findings to the average home, but we will say that anyone who has a pet accepts the responsibility of understanding their pet’s needs and providing them. And what we’ve learned is that all cats need environmental enrichment.”