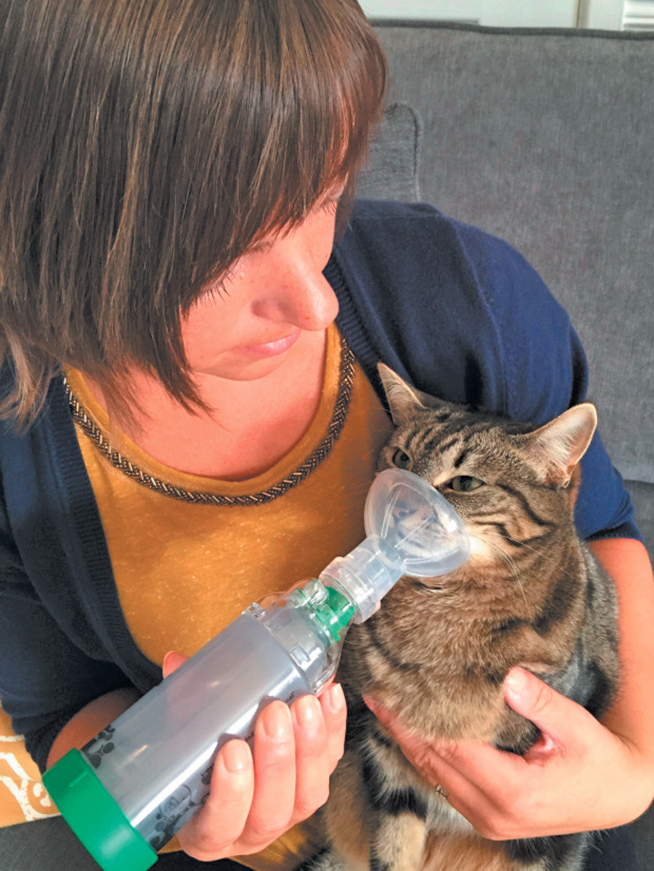 “When a cat coughs on a fairly regular basis, people often think their pet is trying to throw up hairballs,” says Tufts veterinarian Elizabeth Rozanski, DVM. “But coughing and throwing up are two separate things. And unless you see actual hairballs vomited up, a coughing cat should be brought to the veterinarian,” she advises.

There’s a fair chance the cause is asthma. “Asthma is thought to be pretty common in cats,” Dr. Rozanski says. While dogs don’t get the disease, it “affects up to 5 percent of felines” — one in 20.

It’s a condition in which the lungs’ airways function normally most of the time but periodically narrow, thicken, and fill with mucus and other “goo,” making it hard to breathe, Dr. Rozanski explains. Some cats get asthma attacks severe enough to periodically land them in an oxygen cage.

To differentiate asthma from other conditions associated with coughing — heart worm disease, lung worms, laryngeal cancer, heart disease — the vet will perform various tests along with a chest x-ray. A cat with asthma will often have airways in the lower lungs that are mineralized, or thickened.

Which cats are more asthma-prone?

Although Siamese and Himalayans are more prone to asthma than other breeds, all kinds of cats can and do come down with it. The cause of asthma in a cat (just like in a person) can’t always be identified. But some cats are susceptible to asthma triggers — anything from dust mites to pollen. There are cats who have asthma-like symptoms for a month or two each spring, when pollen comes out. It’s sort of like hay fever, with its attendant difficulty breathing.

A cat will almost always start showing signs of asthma — coughing, wheezing, open-mouth breathing, lethargy — as a young or middle-aged adult. If a cat older than 10 starts having difficulty breathing, the cause is probably cancer or heart disease rather than a late case of asthma.

The pros and cons of treatments at your disposal

One of the mainstays of asthma treatment in cats is a corticosteroid called prednisolone. It’s an anti-inflammatory that calms distressed airways, and some cats are on it every day for the rest of their lives once diagnosed. Because asthma is chronic, the aim is to avoid flare-ups rather than just treat them once they occur.

Prednisolone comes both as a pill and an inhaler. Which is better? It depends.

The up sides of oral prednisolone are that it’s relatively easy to administer, and it’s very inexpensive, costing about $20 a year. The down side is that it appears to raise the risk of diabetes. Because it’s given orally in pill form, it reaches the entire body and affects cats’ blood sugar regulation. In addition, the oral form of the drug shifts water balance in the body, sometimes leading to fluid in the lungs in cats who are already prone to heart failure.

If you choose the inhaled form (the face mask and related apparatus are sold as AeroKat), you’ll avoid medically induced diabetes. But the cost runs to $600 a year. Then, too, you’re dealing with getting a face mask on your cat — twice a day, generally speaking. Some cats do get used to sitting on their owner’s lap or being wrapped in a towel while breathing in with a mask, but others…well, you know how that might go.

“You have to look at personality in addition to your wallet,” Dr. Rozanski says. “If you can’t touch your cat because she will resist the medication, it’s going to interfere with your relationship.” Some cats can’t even take the daily pills. “For that reason,” Dr. Rozanski says, while giving an asthmatic cat medicine every single day is optimal, we sometimes end up not treating cats who are only minimally symptomatic. A cat’s relationship with her family is more important.”

What if the cat really is having serious respiratory difficulty?

For cats often in crisis and having a really hard time breathing, there’s a long-acting steroid called Depo-Medrol that the pet doesn’t have to take every day — but that’s even more heavily associated with diabetes and heart disease than oral steroids. “If you need to get your cat’s breathing under control and there’s no other acceptable way, however, it’s an option,” the doctor says.

Dr. Rozanski also points out that for a cat in serious respiratory distress, a second medication should be added — a bronchodilator, such as albuterol. This drug helps by opening the large airways that lead to the lungs. It can be given by mouth, by inhaler, or subcutaneously as an injection with a small needle under the skin.

Whatever it takes, once you get your cat’s breathing under control, she can go on to live a long, happy, toy-chasing life, even with an occasional breathing crisis here and there.