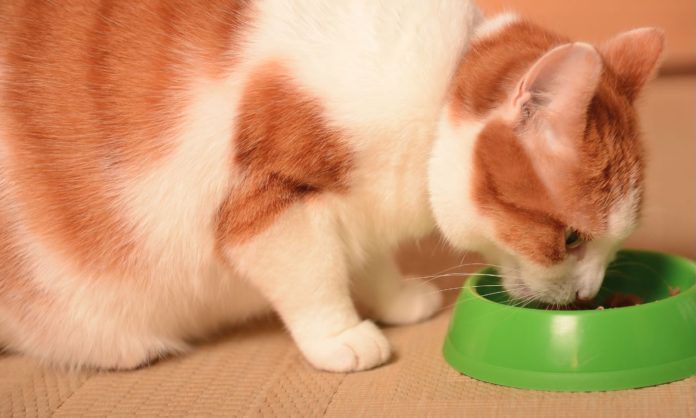 As an old proverb would have it, good things often come in small packages, and this is certainly true where the feline thyroid gland is concerned. Consisting of two fleshy, elongated little lobes, this tiny gland — positioned in the neck along the upper part of a cat’s trachea — is normally only an inch or so in length. Despite its small size, however, the thyroid gland must perform a king-sized task: the regulation of a cat’s overall metabolism, the rate at which the animal’s bodily processes are carried out.

The thyroid gland, a major component of a cat’s endocrine system, accomplishes its essential function by secreting two vitally important hormones, thyroxine and triiodothyronine — commonly referred to as T4 and T3. According to Orla Mahony, MVB, a clinical assistant professor in the Department of Clinical Sciences at Tufts, these hormones circulate through a cat’s body and bind to sensors on tissue surfaces to produce proteins and adjust oxygen levels as needed.

When the thyroid is operating properly, an animal’s metabolic rate is smoothly maintained. But when the gland secretes too much or too little T4 and T3, all bodily processes are apt to either speed up or slow down dramatically — a process that, if untreated, can have significant, potentially life-altering implications.

While the great majority of cats will go through life without experiencing thyroid problems, owners should be aware of two disorders that could possibly affect this tiny gland. The first is hypothyroidism, which is marked by the underproduction of the vital hormones, whose clinical signs may include hair loss, lethargy and decreased heart rate.

More common, however, is hyperthyroidism, in which the gland becomes overactive and releases excessive amounts of the hormones. Consequently, an affected cat’s metabolic rate will rise, which can cause the animal’s heart to beat at an increased or irregular speed. An especially dangerous condition that can be induced by hyperthyroidism is cardiomyopathy, a disease of the heart muscle. Also, an affected cat can develop high blood pressure, with the increased blood flow causing its kidneys to overwork. “Eventually,” says Dr. Mahony, “this puts excessive strain on all of the animal’s tissues.”

The clinical signs of hyperthyroidism include increased appetite possibly accompanied by weight loss, increased water consumption and urination, vomiting and diarrhea, labored breathing and poor hair coat. Although most affected cats will become hyperactive, some may be lethargic, Dr. Mahony points out.

“The condition can progress for quite some time, and some cats may not be noticeably sick until they exhibit marked weight loss and other obvious signs of the disorder. Instead of sleeping, an affected animal might gradually become more active — anxious and restless — during the night. And about 10 percent of affected cats will have a high respiratory rate, so panting is also a sign of hyperthyroidism.” If hyperthyroidism persists and remains untreated, a cat can eventually become emaciated no matter how much food she consumes.

For reasons that remain unknown, hyperthyroidism in cats is usually caused by the emergence of an adenoma (a noncancerous growth) that develops in the gland, although in very rare cases — perhaps three percent or so — the condition may be brought on by a cancerous tumor (carcinoma).

Regarding the causes of these growths, Dr. Mahony says: “This is poorly understood at present, although possible risk factors that have been identified in various studies include the consumption of canned cat food —especially liver-, fish-, and giblet-flavored food. There’s also some concern that an iodine deficiency or a variation in the iodine content of the canned food that a cat consumes during its lifetime could be a risk factor.” Still another theoretical risk factor, she notes, is the ingestion of chemicals that line “pop-top” cat food cans.

A disease of older cats

On the other hand, advanced age is known to be a significant risk factor for hyperthyroidism, says Dr. Mahony. “It’s clearly a disease of older cats,” she notes. “The mean age of cats diagnosed with the condition is about 13 years, and it has been identified in cats as old as 24. However, the condition has also been diagnosed in cats as young as four years of age. So the range is huge.” Also, she notes, breed may play a role, since Himalayan and Siamese cats seem to have a lower risk of becoming hyperthyroid. There is no gender predilection, she adds.

“A cat can probably live with this condition for years,” says Dr. Mahony. “But she will not feel well. It’s a very debilitating disease, and a cat’s survival time will depend in part on what concurrent diseases she has. If, for example, the animal has heart disease, hyperthyroidism will exacerbate it.”

A tentative diagnosis of hyperthyroidism is confirmed by detecting a high level of the T4 hormone circulating in an affected cat’s blood. In 90 percent of cases, just a single blood test will definitively diagnose the disorder. For many veterinarians, says Dr. Mahony, this test is done as one part of a routine geriatric screening. If diagnosed, the condition can be treated medically, surgically or with radioactive iodine. A fourth option involves dietary measures.

In some cases, medical treatment of hyperthyroidism will involve the administration of a drug called methimazole in pill form two times per day. This medication will block the secretion of thyroid hormones but will not remove or destroy a tumor responsible for the condition. Thus, while potentially effective in retarding disease progression, it is not a cure.

Surgical treatment, which will remedy the hyperthyroid condition, involves removal of all or most of the gland. Unfortunately, while the thyroid gland is easy enough to remove, there are other glands — the parathyroid glands — located near the thyroid and even partly within the gland itself.

These tiny parathyroids regulate a cat’s calcium levels, and if they are damaged or removed by accident during surgery, the animal may become subject to low calcium levels that will require medical management. The third option — treatment with radioactive iodine — is comparatively simple, consisting of a single dose administered by means of an injection just under the skin, although it may be given orally or intravenously.

This treatment tends to be extremely effective, and it is likely to permanently cure a cat’s hyperthyroidism. “However,” observes Dr. Mahony, “radioactive iodine treatment, like surgery, requires a high upfront expense on the part of an owner, and not everybody is able to make such a large financial commitment.”

The latest breakthrough in treatment, she points out, has been the development of a novel prescription diet designed specifically to treat hyperthyroidism. Called Hill’s Prescription y/d, this product is commercially available in both canned and dry form.

“It’s a diet that is so restricted in iodine that a cat can’t form the thyroid hormone T4,” explains Dr. Mahony. “Studies show that this diet works, so it is an alternative to medication. Since it is an exclusive diet, a cat that is put on it cannot consume anything else — not even a treat, for instance, or a medication that might contain just a trace of iodine.”

In view of this diet’s effectiveness and its commercial availability, Dr. Mahony considers feline hyperthyroidism to be, at present, “a very treatable condition.” — Tom Ewing