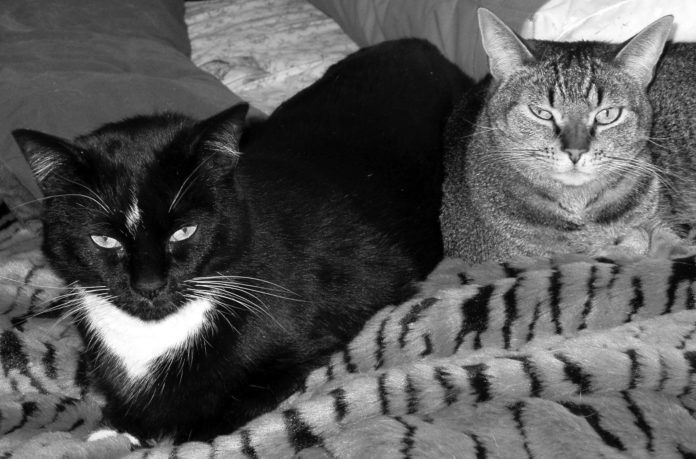 At age 11, littermates Wizard and Sir Silver were diagnosed as “pre-hyperthyroid.” Essentially, their T4 (thyroxin) levels were elevated, but not yet high enough to start treatment.

Over the next few months, tabby Silver developed several classic signs of hyperthyroidism: increased appetite combined with weight loss, anxiety, hyperactivity and increased vocalization. Wizard’s signs were less dramatic, but still pronounced: the large tuxedo cat lost weight, and, because of his overcharged metabolism, persistently sought out the coldest locations in the house for his naps — quite a change for this perennial warmth-seeker.

As they neared their thirteenth birthday, both cats’ clinical signs — including extremely high heart rates and greatly elevated T4 levels — signaled that it was time for treatment. We scheduled Wizard and Silver for radioactive iodine (I-131) treatment at iI31New Hampshire (Capital Area Veterinary Emergency Services in Concord, NH).

According to most experts, I-131 is the treatment of choice for hyperthyroid cats. Until relatively recently, it was extremely costly, was available in only a few locations, and required a lengthy hospital confinement that proved stressful for many cats. So, my family was thrilled to discover that the hospital stay is now measured in days — rather than weeks — and that the cost has come down considerably. It now compares favorably to lifetime management with methimazole.

Wizard and Silver arrived at the treatment center early on Monday morning. A short while later, they received the I-131 treatment — just a single injection. By the time I arrived back home, they were back in their cages. The treatment center provides a terrific, and very reassuring, perk for worried pet parents: cage cams. After entering a user ID and password, I was able to watch the boys right in my web browser.

State and federal laws determine how long I-131 cats must be confined to the hospital (an important note: “early release” is completely out of the question!). Only suitably-protected technicians are allowed to approach or handle patients. As soon as a cat’s radiation level drops below a specified level, he or she is free to go home.

On Thursday morning, the phone rang: Silver was ready to come home! We didn’t want him to be in the hospital a moment longer than necessary, so we made the hour-plus drive to pick him up. While at the hospital, our family was able to “visit” Wizard through a thick glass window. (By Friday morning, Wiz was back home, too.)

Because they’re still emitting some radiation even after release from the hospital, treated cats are not allowed close or prolonged contact with human or feline family members for two weeks after they return home. Our “isolation room” is a comfortable bedroom with a screen door that allows the other cats to “visit” from a safe distance. I-131 cats excrete radioactive material in their urine and feces, so used litter must be isolated and safely retained for 90 days. We set up a litterbox, covered bucket and scooper that could be discarded.

As of this writing, the boys have been home for several days. I spend a few hours a day in their room, though I’ve been warned to keep close cuddling to a minimum. For the duration of their confinement, the boys must stick to the low-iodine diet. In about a month, we’ll re-check their T4 levels. A single I-131 treatment effects a complete cure in over 95 percent of hyperthyroid cats. That’s about as close to a miracle as you can get in veterinary medicine.