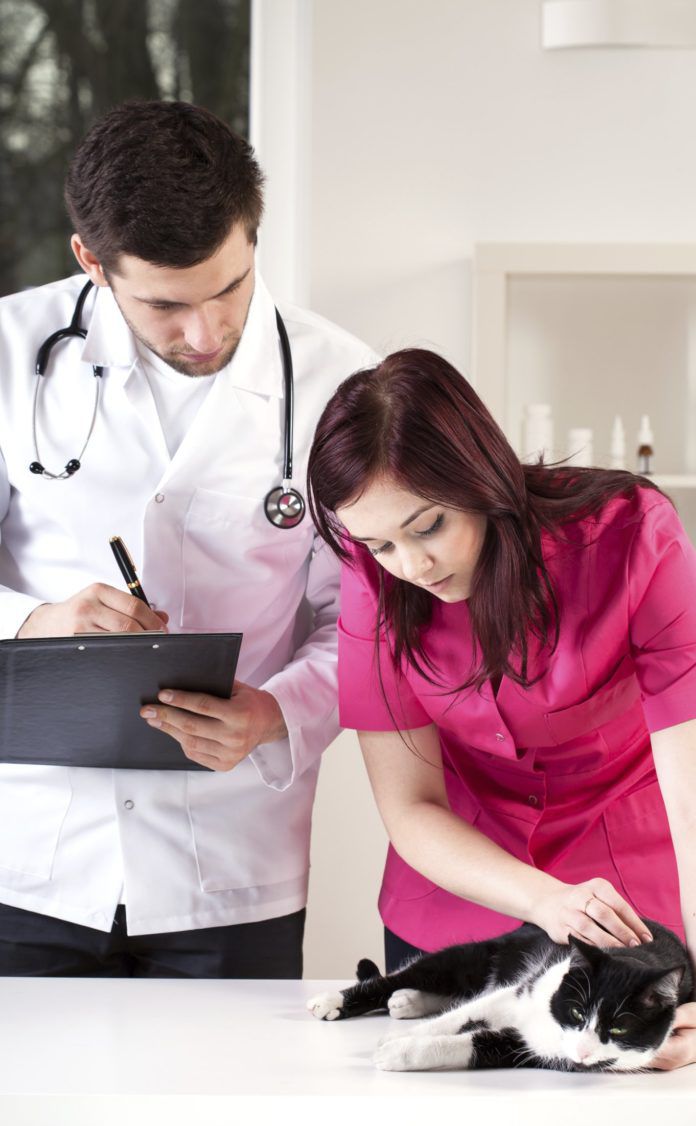 The feline urinary system relies on two structural components: an upper tract and a lower tract. The upper urinary tract consists of two kidneys, which handle the biochemical processes; and two slender tubes (ureters) — one leading from each kidney — that deliver waste-containing urine from those organs down to the lower tract.

The lower urinary tract — whose function is solely excretory — consists of the bladder, a muscular sac that receives the urine delivered to it through the ureters and stores it until it is expelled from the body via the other component of the lower tract, the urethra, a narrow tube leading from the bladder to the outside world.

Cat owners should be aware that the lower tract — though far less complex in form and function than the upper tract — is vulnerable to a variety of painful and possibly lethal disorders, frequently referred to collectively as FLUTD (feline lower urinary tract disease). That term, however, has fallen out of favor among veterinarians in recent years since it is overly simplistic and fails to identify the distinct conditions that prompt clinical signs in a specific cat and therefore require correspondingly tailored treatment.

According to Linda Ross, associate professor emeritus in the Cummings School’s department of clinical sciences, “FLUTD is a very broad term that refers to any lower urinary tract signs, such as blood in the urine, straining to urinate, crying out while urinating and passing only a small amount of urine at a time.”

Common signs to observe
Other commonly observed signs include: a marked increase in frequency of urination; changes in voiding habits, such as urinating in unusual places; and persistent licking at the opening of the urethra. “Anything that’s going to irritate the lower urinary tract can cause these signs,” notes Dr. Ross. Rather than relying on the term FLUTD, she therefore advises, it is far more useful to identify, when possible, the specific disorder that is causing the distinctive clinical signs.

Unfortunately, the cause of lower urinary tract signs in many cats remains a mystery. The extent to which an animal’s age may influence susceptibility, for example, is unclear, since older cats appear to be more vulnerable to some urinary disorders and younger cats seem more prone to others. Overall, the typical age of cats experiencing a lower urinary tract condition is about four years; and there appears to be no marked disposition for these disorders in terms of specific feline breeds.

An extremely small number of cases — three percent or less, according to Dr. Ross — may be attributable to bacterial colonization and infection within the tract. In addition, some research has suggested that urinary tract disorders may be fostered by improper diet or even a cat’s stress level, with varying degrees of credibility attached to each of these possible contributing factors. Among all of the potential types of feline lower urinary tract disorders, Dr. Ross cites the following three as those that are, by far, the most frequently diagnosed:

Idiopathic cystitis The causes of this painful condition, which accounts for two-thirds or so of all diagnosed urinary tract cases, are as yet unknown. Observed in both males and females, the disorder tends to have a rapid onset and typically resolves itself spontaneously within five to seven days. Recurrence is common, however. About 50 percent of affected cats are normal between episodes, but can have additional bouts periodically, anywhere from days to years after the initial onset of the disorder. “This condition is very frustrating for us veterinarians as well as cat owners,” says Dr. Ross. “We don’t know the cause of it, so we can’t offer a specific treatment.”

Urolithiasis About one-fifth of diagnosed lower urinary tract problems are attributable to this disorder, which is uniquely characterized by the formation of stones in the urinary bladder. The stones are composed primarily of inorganic materials — most often the minerals calcium oxalate or struvite. Some research has indicated that dietary modification may help discourage urolithiasis, such as using cat food that is formulated specifically to inhibit the formation of stones. Although the stones in the bladder may be irritating, their presence alone does not typically constitute a medical emergency. In many cases, the veterinarian will be able to relieve the problem by either surgically removing them or, if possible, by dissolving the stones with a special diet. Unfortunately, calcium oxalate stones, which are the most common, cannot be dissolved.

Urethral Obstruction The most severe disorder involving the feline lower tract occurs when a cat’s urethra becomes completely blocked either by a urinary stone or, more commonly, by what is called a urethral plug — a soft clump of protein matter whose consistency Dr. Ross likens to that of toothpaste. “We don’t know where it comes from or why it forms,” she notes. Male cats are at greater risk than females for this disorder due to their comparatively narrow urethra, she notes. If the urethra becomes totally blocked and the patient is unable to urinate, an affected cat will typically lose consciousness and die within 48 hours if the blockage is not removed and the resulting kidney failure is not treated.

Make vet appointment pronto
Any cat, regardless of age, breed, gender or overall physical condition should immediately undergo a thorough veterinary exam if exhibiting such signs of a lower urinary tract disorder such as urinary frequency or apparently painful urination. If a urethral obstruction is detected, a veterinarian can usually diagnose the blockage during the physical exam by palpating the urinary bladder, which typically will be greatly enlarged. Other tests, says Dr. Ross, may include a urinalysis, an X-ray, and, in some cases, an ultrasound exam. “It may turn out that the cat’s urinary tract is not obstructed,” she points out, “but if it is, taking the animal in for an exam could turn out to be a life-saving trip.”

Problems can recur
If no significant urethral obstruction is evident and emergency treatment is unnecessary, the painful signs are likely to disappear within a week or two. Cat owners must understand, however, that the problems with urination are very likely to recur from time to time and that, whenever they do, prompt veterinary consultation should be pursued without delay. — Tom Ewing