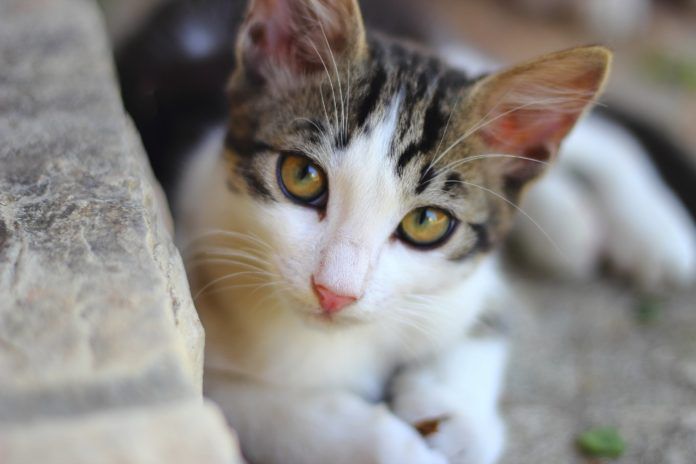 The eight-month-old kitten was referred to Tufts because he was bleeding excessively after being neutered. This type of reaction was not normal, leaving veterinarians at Cummings School of Veterinary Medicine at Tufts University briefly puzzled — and concerned.

The domestic shorthair needed a transfusion following his neutering. After that, the owners, who had adopted him from a shelter, kept him inside. “This particular cat turned out to have hemophilia,” recalls Susan Cotter, DVM, Distinguished Professor Emeritus in the Department of Clinical Sciences at Cummings. “But when he was a few years old, he got out and got into a fight. A bite wound put him back at Tufts again, but that time, he did not require another transfusion.”

As in humans, hemophilia in cats is a group of hereditary bleeding disorders in which the blood fails to clot normally. The disorder in cats actually manifests quite similarly to that in humans — namely abnormally profuse bleeding. Hemophilia, a fairly rare disease, occurs in less than one percent of all cats.

“The blood clotting system is very complex; many different proteins must interact to cause a blood clot to form normally,” explains Michael Stone, DVM, Clinical Assistant Professor and internal medicine specialist at Cummings. “Deficiency or defective function of one of two of these clotting proteins causes hemophilia.”

The cause is a gene mutation, which means hemophilia is an inherited disease, passed on from one or both parents. It’s an X-linked recessive trait — meaning the defective gene is located on the X chromosome. Hemophilia occurs predominantly in male cats, which have only one X chromosome. On the other hand, females have two X chromosomes, so if the gene on one is defective, the other chromosome can compensate, masking the defect.

“The only way to produce a female cat with hemophilia is to breed an affected male with a carrier female, which no reputable breeder would do,” explains Dr. Cotter. “I believe all carrier females should be spayed.” Any cat breed may inherit hemophilia. In fact, the cases most often described in veterinary journals involve hemophilia in domestic shorthairs.

As in humans, hemophilia A is caused by a lack of a blood clotting component called factor 8 (VIII), while hemophilia B results from a deficiency of clotting factor 9 (IX). Although the deficient clotting factor may vary, the two types of hemophilia manifest in much the same way.

Depending on which clotting factor is absent, the disease can range from being asymptomatic to fatal during kittenhood. Kittens might have bleeding under their skin, which would manifest as a hematoma — a blood-filled swelling. Unexpectedly high kitten mortality — either during gestation or at a young age — can also occur with hemophilia.

Most cases have been diagnosed after elective surgery. Because most cases are diagnosed in male cats, the problem is most often noticed when an affected male kitten is neutered, causing spontaneous bleeding to occur.

Dr. Cotter says, “This post-operative bleeding rarely happens in normal cats. And normal cats don’t usually bleed into their joints, as hemophiliac cats do. Cats are small, agile creatures. Jumping is an integral part of their lives. They don’t set off spontaneous bleeding episodes simply by jumping off a couch.”

What breeders should know

She offers advice to professional cat breeders. “If a breeder suspects that one of his or her cats is hemophiliac, it’s fairly easy to test for it — and easy to prevent the disease from spreading,” she says.

An activated partial thromboplastin test — one of the tests performed as part of what is commonly known as a clotting profile — can be done by most labs. If further testing is warranted, a blood test sent to a reference lab can then measure the levels of each individual clotting factor.

Analysis of the individual clotting factors is also necessary to define the type of hemophilia. “Unfortunately, genetic tests for the gene mutations, which could be used preventatively, are not yet available for cats,” says Dr. Cotter.

Unfortunately, treatment is not as simple as replenishing the deficient clotting factor. Instead, whole blood or plasma transfusions are used. “Concentrated clotting factor 8 (VIII) is not available for cats as it is for humans,” says Dr. Cotter. “It’s just too expensive.”

Treatment is usually modified according to the severity of the bleeding tendency. If a hemophiliac cat is experiencing acute bleeding, a transfusion might be necessary. However, clotting factors won’t survive refrigeration for long, so the blood must be fresh, or plasma can be used that has been frozen up to one year before use, cautions Dr. Cotter.

After the transfusion, bleeding can be controlled for that particular incident, but additional transfusions would be needed following future incidents.

Owners can take steps to prevent such incidents from occurring in the first place by keeping a hemophiliac cat in a protected environment. Mostly this is common sense, says Dr. Cotter, recommending that owners of hemophiliac cats also have an emergency plan — ideally, a nearby clinic with a feline blood supply on hand.

“Here at Tufts, we can make plasma, if need be, from blood drawn from donor cats,” she says.

The feasibility of keeping a pet cat with hemophilia, says Dr. Cotter, depends largely upon the particular person and cat involved.

“Some owners might find that one bleeding incident per year is manageable,” she says. “But for often-repeated episodes, they may find that the financial and emotional costs of repeated transfusions are just too great. Unfortunately, many hemophiliac cats are eventually euthanized.” — Catnip staff