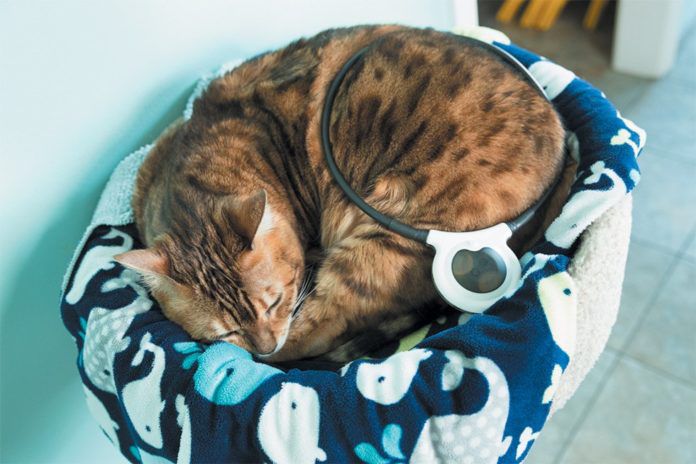 Imagine a medical device that hastens the healing process and provides relief from conditions ranging from osteoarthritis to itchy hot spots on the skin, often to the point that a lower dose of medication may be used. The Assisi Loop may be such a device.

Approved by the Food and Drug Administration, the Assisi Loop is a rounded loop with a disc-shaped medallion on it. The veterinarian or pet owner puts the loop around or on the affected area, and the medallion delivers pulses to create what is called a targeted pulsed electromagnetic field. The activation of that field mimics the normal stimulation that is present at the cellular level in healthy tissue, essentially bringing about the same naturally occurring cell repair that can be disrupted by illness or injury. The looped device can be placed not only on or around a body part but also put over casts and dressings without any loss of the desired effect.

Leilani Alvarez, DVM, head of Integrative and Rehabilitative Medicine at New York City’s Animal Medical Center and board-certified in veterinary sports medicine and rehabilitation, says, “I commonly use it for many conditions in both cats and dogs.”

Dr. Alvarez conducted a study published in the Journal of the American Animal Hospital Association that looked at the effect of the Assisi Loop on 53 dogs who underwent back surgery to tend to intervertebral disc extrusion — a sudden release of disc material from the spinal column that causes bruising and compression of the spinal cord and is one of the leading causes of paralysis in canines. Twenty-seven of the dogs received therapy afterwards with the Assisi Loop; 28 received placebo treatment. Owners and veterinarians were unaware of whether the dogs had received the Assisi Loop treatment or not.

The result: while there was no difference in actual neurologic recovery between the two groups, dogs receiving the pulsed electromagnetic field therapy with the Assisi Loop had improved healing of wounds six weeks after surgery and a reduced need for pain medica-tions for up to seven days after their operations, compared with dogs in a control group.

Another study, also on dogs who had intervertebral disc extrusion, showed similarly promising results. This one was conducted by researchers at The North Carolina State College of Veterinary Medicine and was published in the Journal of Neurotrauma. Sixteen dogs with acute intervertebral disc extrusion causing complete paralysis were treated surgically and then randomly separated into two groups: one that received treatment with functioning Assisi Loops and one that was treated with “sham” Loops that were turned off. Owners of the dogs treated with working Assisi Loops applied them for 15 minutes every two hours for the first two weeks, then twice daily for four weeks.

The dogs treated with working Assisi Loops did not walk better than the other dogs after several weeks. But their pain threshold at the surgical site appeared to be higher (meaning the pain they felt had lessened compared to the untreated dogs), and at 6 weeks their proprioceptive placing was better, too. That meant they had gained greater awareness of the placement and movement of their feet as they recovered after surgery. In other words, the Assisi Loop may have helped reduce the extent of spinal cord injury.

The researchers caution that the study size was small and the results limited, but they feel their findings were intriguing enough to warrant larger trials.

Do cats mind the apparatus?

Dr. Alvarez says the Assisi Loop does not seems to stress cats at all. “It’s very well tolerated,” she says.

Owners have noted anecdotally that the treatment seemed to help limit pain, reducing or canceling out the need for NSAIDs. Better still, it’s easy for a veterinarian to show an owner how to use the loop at home, reducing stress for a cat who doesn’t like going to the doctor’s office for treatment.