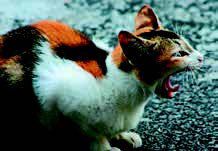 The year 1979 marked the first time a cat was diagnosed with a hyperactive thyroid. Since then cases have been on the rise. Up to one in six older cats is affected by this illness, which throws their metabolism into overdrive, making it overshoot the mark. Symptoms include emaciation (even though appetite becomes ravenous), a raggedy coat, increased agitation, more frequent vocalizations, and a rapid or irregular heartbeat. Researchers have been wondering if something in the environment is causing the increased incidence, with theories ranging from dietary deficiencies to pesticide ingestion. Now, investigators reporting in the journal Environmental Toxicology and Chemistry may have come a step closer to identifying the culprint.

When they compared blood samples from cats with hyperthyroidism to cats without it, they found that the sick cats had significantly higher levels of per- and polyfluoroalkyl substances, or PFAs — chemicals used for everything from protective coatings for carpets and clothing to insecticides — than cats with normal thyroid glands. Their blood PFA levels were even significantly higher than those found in people.

The study’s lead author, Dr. Miaomiao Wang of the California Environmental Protection Agency, says the findings are preliminary but provide a good avenue for further investigation. The good news: some PFAs have already been phased out based on evidence that these chemicals, which don’t break down but, rather, accumulate over time, can lead to adverse effects on human health.