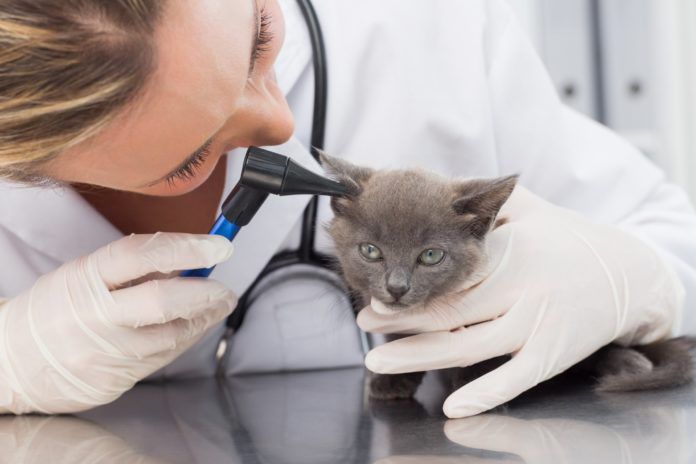 A remarkably acute sense of hearing is among the distinctive characteristics of a healthy cat. While the human auditory system is capable of detecting sounds ranging in frequency up to about 20,000 vibrations per second, cats typically can sense sounds pulsating at 60,000 vibrations per second or greater. This impressive acoustic sensitivity has been honed over the ages to serve a cat in countless ways — signaling the stealthy approach of a dangerous predator, for example, or detecting the underground movement of a burrowing rodent.

Although most cats will go through life without experiencing significant auditory problems, owners should be aware that various ear conditions can be extremely painful and may, if unrecognized and untreated, compromise a cat’s hearing. These conditions include, for example, congenital structural defects, physical trauma and obstructive growths within the ear, such as polyps and tumors.

What Causes Ear Infections in Cats?

Among all such threatening disorders, the most commonly observed is otitis, an inflammation of the ear. According to Michael Stone, DVM, a clinical professor of small animal medicine at Tufts, “There are many different causes of otitis in cats, including parasites, the buildup of wax or the development of growths within the ear.

“These problems are most common in kittens, and they’re sometimes seen in older cats. They are observed less frequently in middle-age cats.”

A cat’s ears are made up of three structural areas: the outer ear, middle ear, and inner ear. The outer ear consists of the external earflap (pinna), and the ear canal — a narrow tubular passage through which sound vibrations enter the ear from the outside environment. The middle ear contains the eardrum, a taut membrane that vibrates in response to incoming sound waves, and the auditory ossicles, small bones that transmit the eardrum vibrations to the inner ear. And the inner ear, located deeper within the skull, contains the cochlea, a snail-shaped structure containing nerve endings that receive the vibrations and pass them along to the brain, enabling a cat’s hearing. The inner ear is also the site of the vestibular system, a complex arrangement of nerves and receptors that govern a cat’s sense of balance.

Most common among feline ear disorders is otitis externa — infection of the outer ear. If this disorder is not treated promptly, the infection can migrate to the middle ear, where it is termed otitis media, and to the inner ear (otitis interna). In the most severe cases, the inner ear and ear drum can be irreparably damaged by infection, potentially resulting in some loss of hearing. Severe infection can also imperil an animal’s vestibular system, the complex arrangement of nerves and other components that govern a cat’s sense of balance.

“Progression of inflammation from the outer ear to the middle or internal ear is uncommon,” says Dr. Stone, “but this can occur, especially when an untreated ear infection has been present for a long period of time.” In the worst case, he notes, an infection can spread to the brain, since the inner ear is intimately connected to the brain stem. “I see this severe complication, which may be fatal, once or twice a year,” he says.

Among all causes of otitis in cats, says Dr. Stone, infestation with ear mites (Otodectes cynotis) is by far the most common. “Such infestation is most frequently seen in young cats,” he says, “but cats of any age may be infected if they come in contact with other cats who are already infected.”

Otitis externa can also be observed in cats who are susceptible to seborrhea, a skin ailment marked by excess oily secretions from the sebaceous glands. This ailment results in the accumulation of surplus ear wax in which invading insects, bacteria and other organisms can flourish.

Which Cats Are At Risk for Ear Infections?

All cats are susceptible to otitis, Dr. Stone points out, regardless of age, gender or breed. However, young cats seem to be more commonly infected with ear mites, while older cats are more likely to develop growths within their ears. Middle-aged cats develop allergies that increase the vulnerability of tissues within the ear, and outdoor cats are more likely than indoor cats to come in close contact with animals who are already infected with mites and other infectious agents.

The cat’s erect ear may make it less prone to infection than the floppy ears of many dogs, he adds. But, notes Dr. Stone, certain innate or acquired malformations of the feline ear, such as that of the pinnae — the external skin and cartilage of the ear that extends away from the head — may decrease air circulation in the outer ear and allow recurrent infections to develop.

The presence of otitis externa in an adult cat is, in most cases, clearly evident: afflicted animals will incessantly shake their heads and scratch at their ears. However, in some cases — mostly in kittens — the disorder may not be noticed until a veterinarian spots it during the course of a routine examination. But the clinical signs associated with otitis media and otitis interna are typically more dramatic.

“Inflammation of the middle ear,” says Dr. Stone, “may cause paralysis and/or a drooping eyelid on the affected side of the cat’s face, while inflammation of the inner ear will cause a sudden loss of balance. The cat will have a pronounced head tilt, will roll to one side, and may be unable to walk.”

A veterinarian is likely to search for the cause of a feline ear disorder by using an otoscope — a flashlight-like instrument that is designed to explore the depths of an animal’s ear. In most instances, the veterinarian will also use a cotton swab to collect a sample of a cat’s ear debris for microscopic examination.

Treating a feline ear infection is most often a relatively simple matter, usually involving a thorough cleaning followed by the application of a topical antibiotic and/or antifungal medication. “A five-to-seven day course of treatment will be effective in most cases of otitis externa,” says Dr. Stone, “although treatment of ear mite infections will have to be carefully followed for a minimum of three weeks.

If the duration of treatment is less than that, the mite eggs — which are resistant to treatment — will hatch and the infection, even if it seems to have been resolved, is likely to return.”

Avoid Cleaning Your Cat’s Ears Yourself

Should owners take it upon themselves to maintain the health of their cats’ ears? “Ear cleaning is neither routinely needed nor recommended for cats,” Dr. Stone notes. “In addition to mite infestation, the most common causes of feline ear problems are tumors, wax buildup, allergies and foreign objects deep within the ears — and all or any of these should be addressed by a veterinarian.”

However, he adds, an owner can certainly play a major role in protecting a cat from experiencing a serious ear disorder by maintaining a clean environment that will discourage the proliferation of ear mites and other potentially infectious agents and by routinely examining the animal’s ears for such signs of infection as swelling, discharge, discoloration and the collection of dirt and debris.

If a cat is observed persistently scratching at his ears, the owner should not probe into them to find the cause, Dr. Stone advises, since insertion of a cotton swab into the ear may pack wax and debris into the ear canal and thus make it more difficult to remove. Instead, he recommends, consultation with a veterinarian should be scheduled without delay.