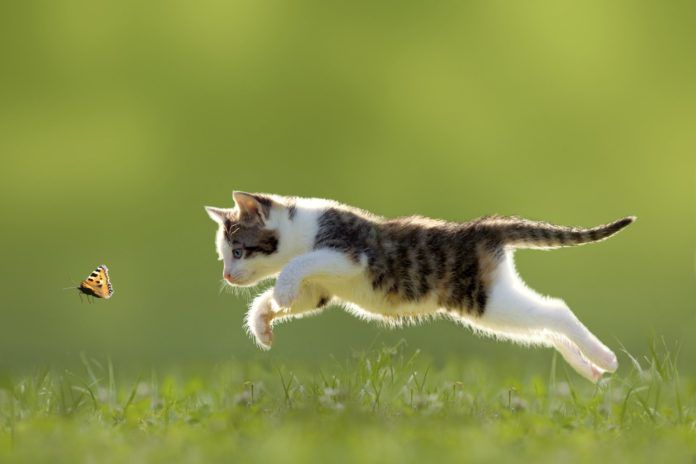 Anyone who has watched a cat use his strong legs to leap into the air or climb a tree can attest to their extraordinary athletic ability. But what happens if a cat’s joints — specifically the knees — do not function properly? This is the case for cats with patellar luxation, or dislocated kneecaps.

A cat’s kneecap is attached to the bones via strong ligaments, and it rides in a groove at the end of the thigh bone (femur). Patellar luxation occurs when there is a misalignment of the thigh muscle to the tibial crest, the bone that attaches the kneecap tendon to the shin bone (tibia). Subsequently, a cat develops a shallow groove for the kneecap as it slides in and out of place.

According to Randy J. Boudrieau, DVM, Professor of Surgery at Cummings School of Veterinary Medicine at Tufts University, patellar luxation is classified as a developmental disorder with a genetic predisposition. This means that as a cat grows, the abnormal knee joint progressively worsens.

Cartilage is worn away as the kneecap slides outside its normal groove and eventually bone rubs against bone, resulting in pain for a cat. If not repaired, patellar luxation will cause limping, osteoarthritis and subsequent lameness, and may predispose a cat to other knee injuries.

Signs to Watch For

Often the first indication of a knee problem is a skipping gait. A cat will take a few steps on three legs, but then put the raised leg down and walk normally. “What’s happening is that the kneecap has just popped off to the side for that couple of steps and as the cat flexes or extends the leg, it goes back into proper position,” explains Dr. Boudrieau.

Since the condition commonly occurs bilaterally or in both knees, a cat will limp on either leg and might be bow-legged. Symptoms can appear at any age. While some Grade 2 cases are candidates for surgery, cats diagnosed with Grade 3 or 4 patellar luxation require orthopedic surgery to restore normal knee joint function.

The standard procedures for patellar luxation surgery include deepening the groove that the kneecap rides in and repositioning the tibial crest so that the kneecap geometry is straight. The tibial crest is fastened to its new location with one or two small stainless steel pins and sometimes an additional wire, all of which stay in the cat’s knee for life. After six to eight weeks of confinement and limited exertion, a cat is ready to resume normal activity.

Some surgeons stage the operations, performing a separate surgery on each knee eight weeks apart. Other surgeons perform the operation on both knees at the same time, which reduces overall convalescence and cuts the animal’s recovery time in half. Either procedure is acceptable, and depends on the surgeon’s and owner’s preference.

Although cutting and repositioning bones sounds drastic, patellar luxation surgery has an excellent success rate. Cats who undergo this procedure experience minimal complications and typically resume normal knee function without recurrence for the rest of their lives.

“They generally do quite well,” says Dr. Boudrieau. “Once they’ve healed, they regain full range of motion quite soon and much improved function.”

Running, climbing and jumping are a way of life for cats, and cats born with patellar luxation can fortunately look forward to years of normal activity after surgery. — Catnip staff